It’s not an engagement ring just yet.

But Joe Scarborough did give his MSNBC “Morning Joe” co-host Mika Brzezinski a morning to remember at the close of the show to celebrate her 50th birthday. A vicious rumor had circulated that the TV couple held hands on air. But, no. He gave her a chicken sheet cake — which is a regular white cake with an imprint of Mika’s three named chickens. There was also a gigantic bouquet of spring flowers, but it’s unclear who gave them to her — Mike Barnicle may have been responsible for those. 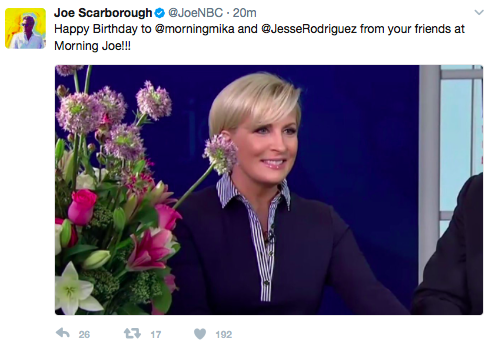 It was the least J0e could do considering that last week he got into an on-air spat with his TV girlfriend when he called Mika “rude” and “snotty.” Forget the show. After that, it was three days off for the couple. New York Post‘s “Page Six” said they went away together for a long weekend. To simmer down, presumably.

On Monday, the couple was still off air. But Mika checked in on Twitter to assess President Trump’s lack of mental wellbeing.

“I’ve been away,” she wrote. “Reading in. It’s startling what you become de-sensitized to. This President is getting worse, if possible. A Very sad time.”

On Tuesday, Joe and Mika presented a united front in saying how unglued Trump is becoming, mentioning his rambling and inability to listen to anyone whose name is not Donald Trump. They begged his advisors to sit him down and demand that everything he says publicly be completely monitored. Mika even raised the issue of a certain president who sort of lost it in his second term. This pacifier idea may be the most absurd suggestion yet, considering it’s the obvious antithesis of Trump’s personality.

Since the show’s inception, both Joe and Mika have cut their respective spouses loose, freeing them up to be together. Up until recently, they didn’t dare reveal their off-air relationship even though they were always together and even sipped red wine from the same glass at the Washington premiere of Game Change at the Newseum in 2012.

But Scarborough destroyed the aura of mystery when he recently revealed to The Hollywood Reporter that their off-air chemistry was as “crackling” as the one viewers see in the morning.

With her boyfriend by her side, Mika said turning 50 feels great.

Joe, 54, joked that he’ll find out what that feels like in a couple years.