Barack Obama implored members of Congress to have the “courage” not to repeal the Affordable Care Act Sunday night.

The former president made his first public remarks about the proposed health care legislation just days after House Republicans voted to pass the measure 217 to 213. If it passes the Senate, it would repeal and replace major parts of Obamacare. 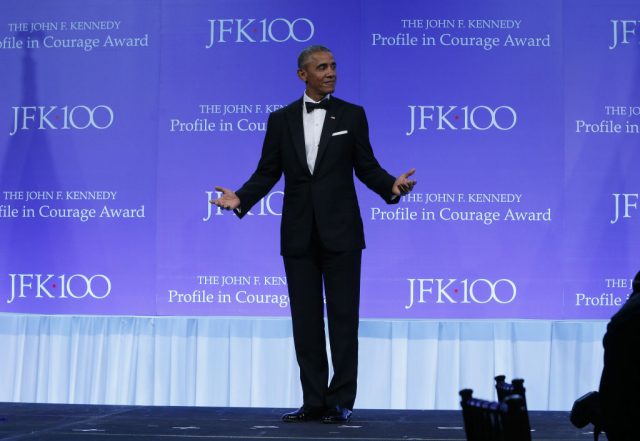 “As everyone here now knows, this great debate is not settled, but continues,” Obama said at the John F. Kennedy Library while accepting the annual Profile in Courage Award. “It is my fervent hope, and the hope of millions, that regardless of party, such courage is still possible. That today’s members of Congress, regardless of party, are willing to look at the facts and speak the truth, even when it contradicts party positions.”

“I hope that current members of Congress recall that it actually doesn’t take a lot of courage to aid those that are already powerful, already comfortable, already influential, but it does require some courage to champion the vulnerable, and the sick, and the infirmed,” he continued.

“Those who often have no access to the corridors of power.”

Obama: “I hope current members of Congress recall it doesn’t take a lot of courage to aid those already powerful…” pic.twitter.com/J9t5YkTwRt

“I hope they understand that courage means not simply doing what’s politically expedient, but doing what, deep in our hearts, we know is right.”

“I have said before that I believe what Dr. King said — that the arc of the moral universe bends, but it bends towards justice. I have also said that it does not bend on its own, but it bends because we bend it, and we put our hand on the arc and we move it in the direction of justice and freedom and equality and kindness and generosity. It does not happen on its own.”

Obama on how it is the duty of people to bend the arc of justice: “It bends because we bend it” pic.twitter.com/WAl2lynXDo

During his speech, Obama also lauded the Democratic members of Congress who voted in favor of the Affordable Cart Act in 2010 and then lost their seats because of it.

“These men and women did the right thing, the hard thing, and theirs was a profile in courage, and because of that vote, 20 million people got health insurance that didn’t have it before.”