WASHINGTON — Sean Spicer held the daily press briefing at the White House Tuesday, where he was peppered by reporters with questions on when the president found out that his former national security adviser Mike Flynn was susceptible to blackmail from the Russians and why it took the administration 18 days to fire him. 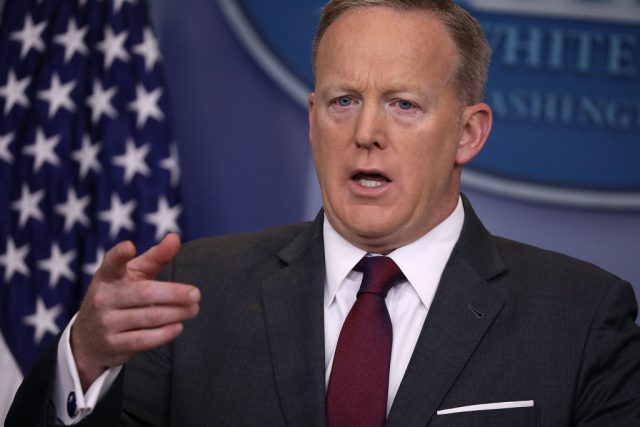 On why it took 18 days to fire Mike Flynn

The press secretary said the White House essentially gave him “due process.”

“[Yates] informed the counsel’s office that there were materials that were relevant, but it wasn’t until about seven days later that they had access to those documents,” Spicer said. “After that time, they did what you should do frankly — an element of due process — and reviewed the situation and informed the president right away.”

Spicer repeatedly characterized Yates’s warning that Flynn was susceptible to blackmail as “a heads up.”

On why the president keeps defending Mike Flynn

“I think Mike Flynn is somebody who honorably served our country in uniform for over 30 years. He did have an honorable career. He served with distinction. The president does not want to smear a good man.”

Spicer wouldn’t say if Flynn was still fulfilling his national security adviser duties during those 18 days.

“Just because someone comes in and gives you a heads up on something doesn’t mean you immediately jump the gun and go take action.”

Spicer also referred to Sally Yates as “a political opponent” of Donald Trump’s and “a strong supporter” of Hillary Clinton’s.

On why Sally Yates wasn’t notified of the first executive order, or “travel ban”

Yates was an Obama administration holdover who was the acting deputy attorney general for just 10 days of the Trump administration before she was fired for refusing to uphold his travel ban.

“I don’t know why she wasn’t [notified],” Spicer said. “We don’t wan to relitigate it. This is someone who didn’t even want to enforce it.”

A reporter pointed out that Yates was unaware of the ban, so how would they have known she would oppose it?

“Ultimately we were proven right about who needed to be in the loop on that. My point is we were correct in assumptions we made in the time.”

On the possibility of deploying more troops in Afghanistan

Spicer said it is about “reducing the threat, especially when it comes to ISIS and the Taliban. We need to fully eliminate any threat around the globe.”

How would more troops eliminate the threat and stop the war when 100,000 didn’t?