Lucy Usoyan doesn’t remember all of the details of the brutal beating she suffered at the fists and feet of a group of men in front of the Turkish embassy in Washington, D.C. last week.

But after being shown a picture of Eyup Yildirim on Wednesday, she says that the 50-year-old supporter of Turkish President Recep Tayyip Erdogan was one of the goons who savagely kicked her while she was curled up in a ball during the melee.

“Absolutely,” Usoyan told The Daily Caller on Wednesday after reviewing Yildirim’s Facebook page to see if he was one of the men who assaulted her.

Yildirim, the owner of a construction company in New Jersey, was one of the most visible figures spotted in videos recorded of last week’s attack.

Completely bald and wearing a white shirt, Yildirim joined dozens of other Turkish men in a full-frontal assault on a group of peaceful Kurdish protesters gathered outside the embassy.

The attackers were a mixture of supporters of Erdogan and bodyguards working for the authoritarian ruler. Erdogan was at the embassy following a White House visit with President Trump.

He watched the blitz from his black Mercedes Benz parked near the Turkish embassy. One video even shows Erdogan passing instructions to his immediate bodyguard just moments before the fight broke out on the street in front of the embassy.

In one video recorded by the Turkish affiliate of Voice of America, Yildirim and other men were seen kicking Usoyan as she lay curled up on the sidewalk.

But Dersimi was outnumbered. Yildirim and several other men, including two wearing suits, began stomping and booting Dersimi, who ended up with his face covered in blood.

Washington, D.C. police officers meekly corralled the assailants, eventually pushing them back across the street. 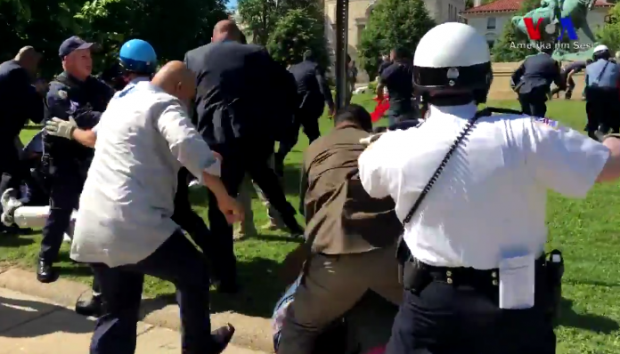 Usoyan, a Kurdish woman who heads the Ezidi Relief Fund, told The Daily Caller that she blacked out while being assaulted.

She says she has been to the hospital twice since the beating. She says she was given an MRI which revealed what she called “a minor brain injury.”

She was told she will need six weeks to fully recover. 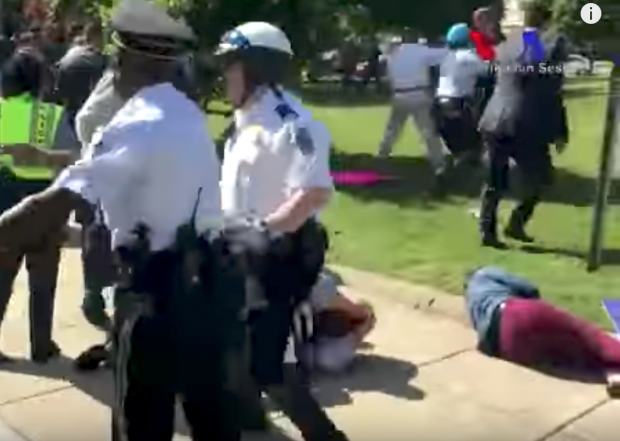 Lucy Usoyan (right, in maroon pants) after being attacked at Turkish embassy, May 16, 2017. (Youtube screen grab via VOA Turkish)

Both said that Yildirim was acting aggressively and cursing before he and Erdogan’s other henchman attacked.

TheDC was able to reach Yildirim on Wednesday at a phone number listed for his construction company, Care Construction.

“I don’t know what you’re talking about,” he said when asked about his involvement in last week’s violence. He ended the phone call after being asked for comment. 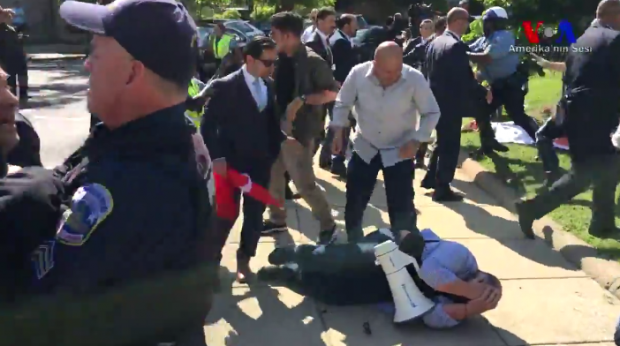 The incident, which left at least 11 protesters injured, has touched off a diplomatic stalemate between the U.S. and Turkey, a NATO ally.

U.S. lawmakers have also blasted the Turkish government. Arizona Sen. John McCain said that the U.S. should kick Kilic “the hell out” of the country. The House Armed Services Committee is also holding a hearing over the incident on Thursday.

The Turkish foreign ministry responded to the U.S. criticism by registering a complaint with the U.S. government for violating its diplomats’ rights under international diplomatic law.

Given that Yildirim is not an official diplomatic agent for Turkey, and therefore not protected by international diplomatic agreements, it is unclear why he was not apprehended last Tuesday or why he has not been arrested since.

Yildirim was identified by TheDC through his small social media footprint.

In the days after the attack, he posted a message on the Facebook page of Ayhan Ozmekik, the president of the Turkish & American Youth Education Foundation and a leader in the U.S. arm of AKP, an Islamist party which Erdogan co-founded in 2001.

The Facebook page for Yildirim includes videos recorded in Washington, D.C. last week. He has also posted photos of a truck bearing logos of Care Construction.

Ozmekik, who is also executive director of the U.S.-based non-profit group, the Turkish Institute for Progress, posted a photo on his Facebook page with a group of men, including Yildirim and several others involved in last week’s attack.

One of the other men in that photo is Alpkenan Dereci.

A Canadian citizen, Dereci was also a highly visible participant in last week’s violence. Clad in a bright yellow shirt, Dereci received a large gash in his head during the attack on the protesters. 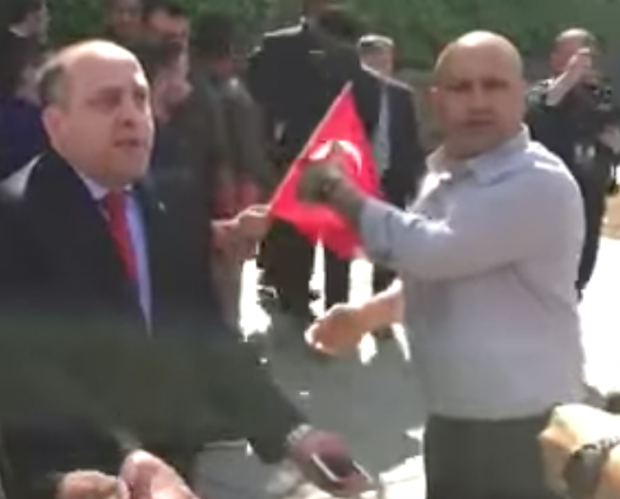 Also in the photo posted by Ozmekik a day before the attacks is Mustafa Tuncer, a Turkish-American businessman who until last week was an executive with a group called the Turkish American Steering Committee (TASC).

As TheDC reported last week, TASC was identified in an internal State Department memo as having some sort of involvement in last week’s event.

That memo, a summary of which was provided to TheDC, stated that the State Department found that some of the men involved in the attack were protected under diplomatic immunity. Others had been hired from within the Turkish-American community. It is unclear whether TASC was involved in hiring additional security detail for Erdogan.

There is no evidence that Tuncer was involved in the protest violence.

“[M]y client was not present at, nor did he participate in, the incident on May 16, 2017,” Tuncer’s attorney, Charles A. McCauley, III, emailed TheDC after publication.

Update: This story has been updated to include an emailed comment from Mustafa Tuncer’s attorney.