Donald Trump has restrained himself from going on Twitter during his first foreign trip since taking office. 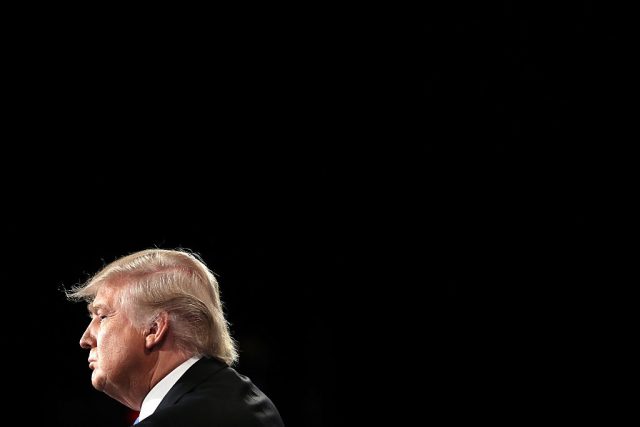 There have been no 6 a.m. tweetstorms, and no snarky 140-character comments about his political opponents as he has traveled from Saudi Arabia to Sicily. In fact, only 16 tweets have been posted on his personal Twitter account since the trip began last Friday, and those are mostly brief clips from his speeches or graphics, which are created and posted by a White House staffer.

Today’s ceremony is a day for both remembrance and resolve.#NATOMeeting #NATO pic.twitter.com/YNZV3bTekB

Thank you for the warm welcome to Brussels, Belgium this afternoon! https://t.co/1AvYSameD4

Thank you for such a wonderful and unforgettable visit, Prime Minister @Netanyahu and @PresidentRuvi.

Compare those tweets with what Trump sent out last week while he was at home in Washington.

He called himself the victim of the “greatest witch hunt of a politician in American history,” confirmed that he revealed classified information to Russian officials and questioned why a special counsel was needed for the investigation into Russian meddling in the presidential election.

This is the single greatest witch hunt of a politician in American history!

As President I wanted to share with Russia (at an openly scheduled W.H. meeting) which I have the absolute right to do, facts pertaining….

…to terrorism and airline flight safety. Humanitarian reasons, plus I want Russia to greatly step up their fight against ISIS & terrorism.

With all of the illegal acts that took place in the Clinton campaign & Obama Administration, there was never a special counsel appointed!

The last tweet that Trump seemingly posted himself was on May 19.

Getting ready for my big foreign trip. Will be strongly protecting American interests – that’s what I like to do!

There has been no shortage of news for Trump to tweet about either.

Former CIA Director John Brennan testified this week that he alerted the FBI about contacts between Russian officials and Trump campaign associates because they “worried” him. Montana Republican congressional candidate Greg Gianforte assaulted a reporter who asked him a question about the health care score. Although Trump and Vice President Mike Pence both recorded robo-calls on Gianforte’s behalf, neither have commented. And his son-in-law Jared Kushner is reportedly being scrutinized by the FBI as they continue to investigate Russian meddling in the election.

Trump has commented on the biggest news this week, a suicide bombing in Manchester that left 22 people dead, but hardly at all on Twitter. The only thing he posted there was a graphic with an American flag and an English flag.

“We stand in absolute solidarity with the people of the United Kingdom.”

We stand in absolute solidarity with the people of the United Kingdom. pic.twitter.com/X6fUUxxYXE

That is far more muted than what he tweeted after the attack on an Orlando nightclub last June, when a man who had pledged allegiance to ISIS killed 49 people.

Appreciate the congrats for being right on radical Islamic terrorism, I don’t want congrats, I want toughness & vigilance. We must be smart!