More than 100,000 comments supporting government regulation of the internet appear to have been automatically submitted by the Electronic Frontier Foundation (EFF), a left-leaning nonprofit, according to a forensic analysis published Wednesday.

The responses likely did not come organically from real people, which the Federal Communications Commission’s (FCC) forum for public comment on net neutrality is intended to be for, according to The National Legal and Policy Center (NLPC). Rather, the NLPC claims the comments seem to be artificially submitted by the EFF since language used is highly similar to EFF’s submission platform and both the email addresses and the physical addresses of the listed people are fake, or don’t exist. 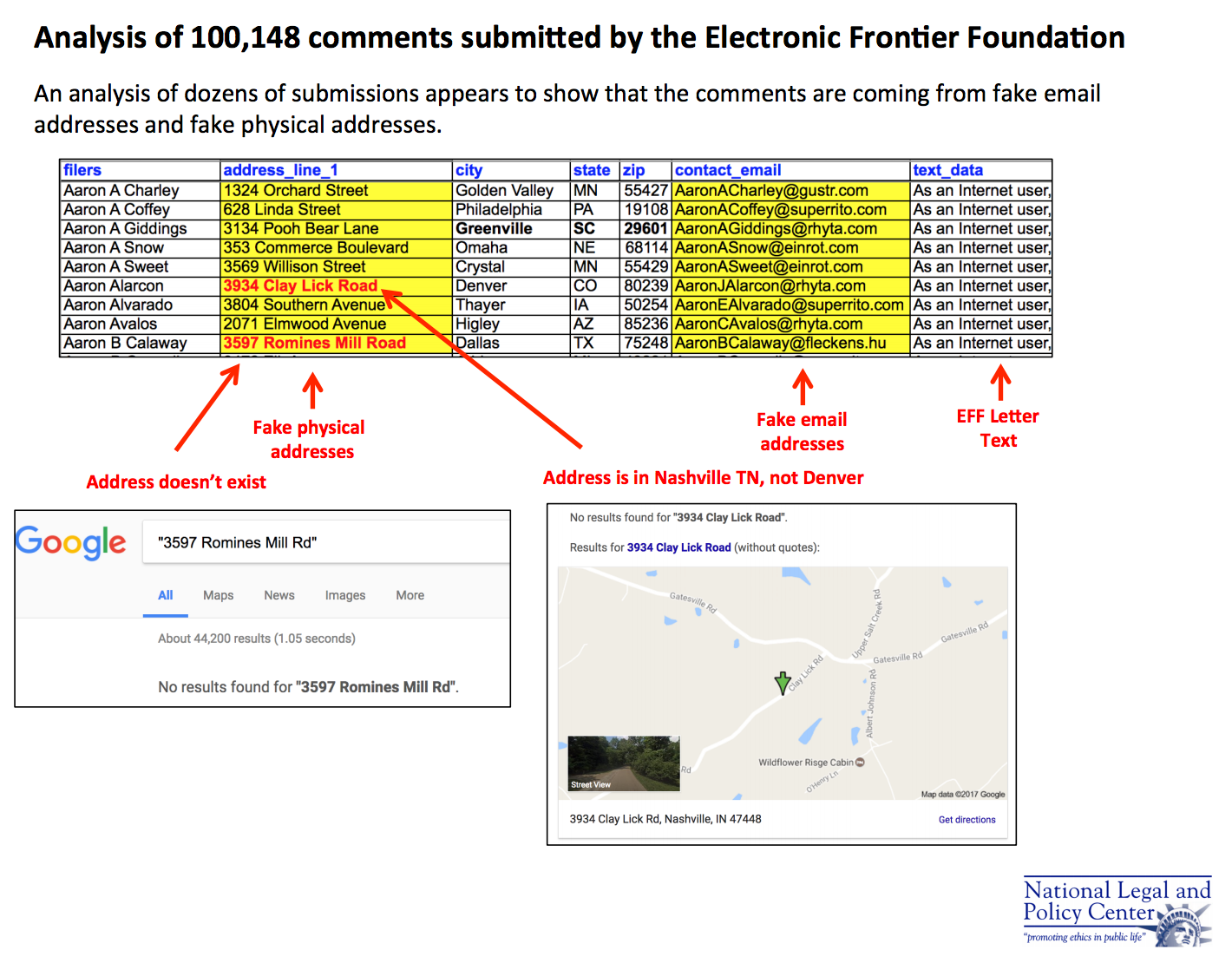 “The full breadth of the fake comments at this point is not known. But based on an initial forensic analysis, we believe it is massive,” NLPC President Peter Flaherty said. “Indeed, based on our initial read, almost one fifth (465,322) of all pro-net neutrality comments submitted into the docket appear to have come from email addresses that have made multiple submissions, sometimes with duplicates in the thousands. At least 100,000 more comments from an Electronic Frontier Foundation Net Neutrality comment campaign appear to have been generated using both fake email and fake physical addresses and perhaps even fake names.”

The NLPC investigated some of the email extensions and discovered that they were listed and offered on “a free disposable email address service called Fake Mail Generator.”

The organization also suspected the potentially feigned support for net neutrality by browsing through 100,148 comments and deciphering that they all contained a suspiciously large portion of language that was used in the EFF’s submission platform. The EFF, though, offers “rotating variables” meaning there are options for certain words to make the comments look different.

“The FCC should [reject/throw out] Chairman Ajit Pai’s [plan/proposal] to [give/hand] [the/the government-subsidized] [telecom giants/ISP monopolies]…” reads the EFF’s template for public comment, according to the NLPC’s screenshot. The submission platform also gives options for which corporations to call out and in what order. 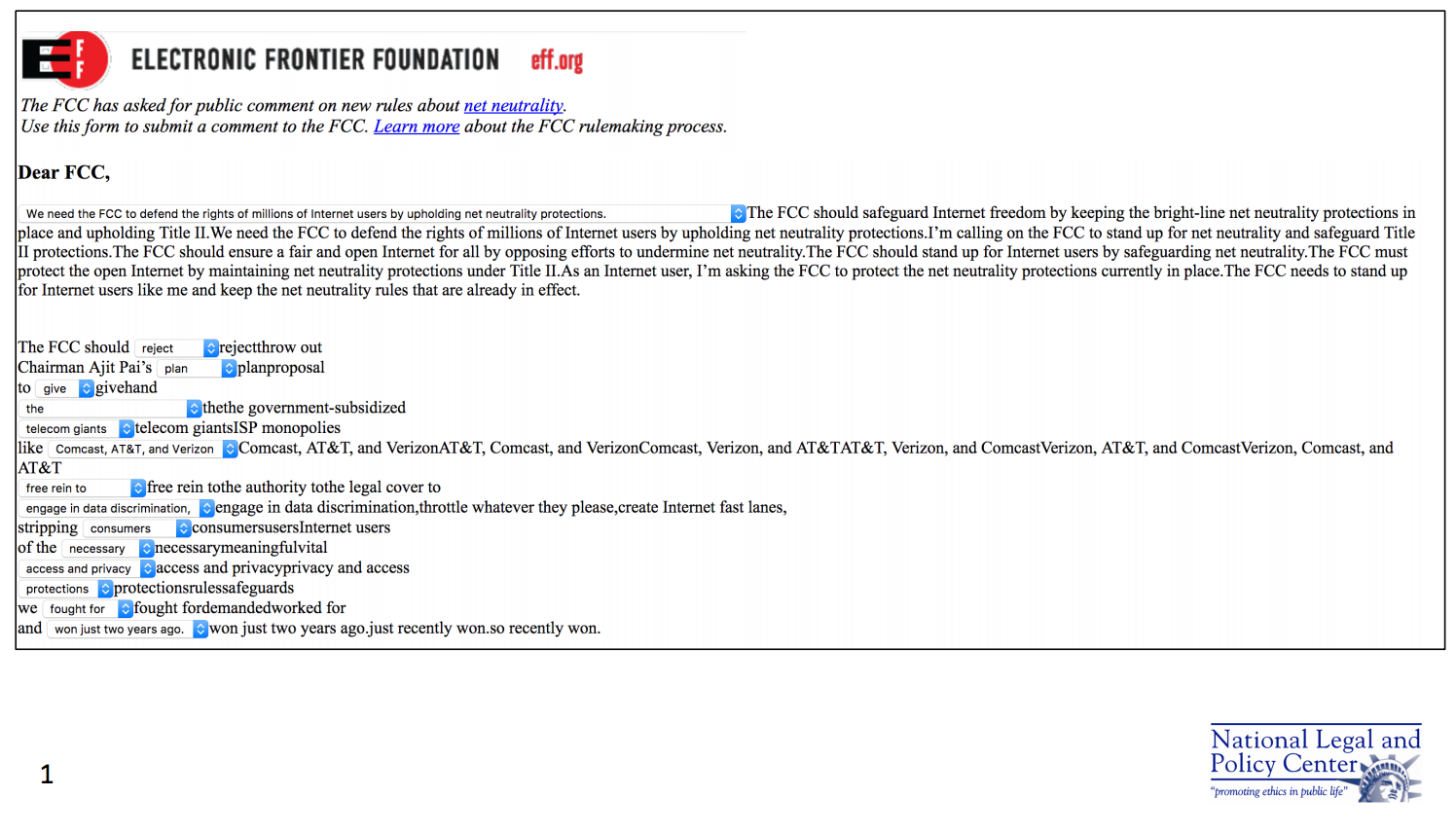 The NLPC alleges that the EFF subtly changes its rotating variables once the web page is refreshed. 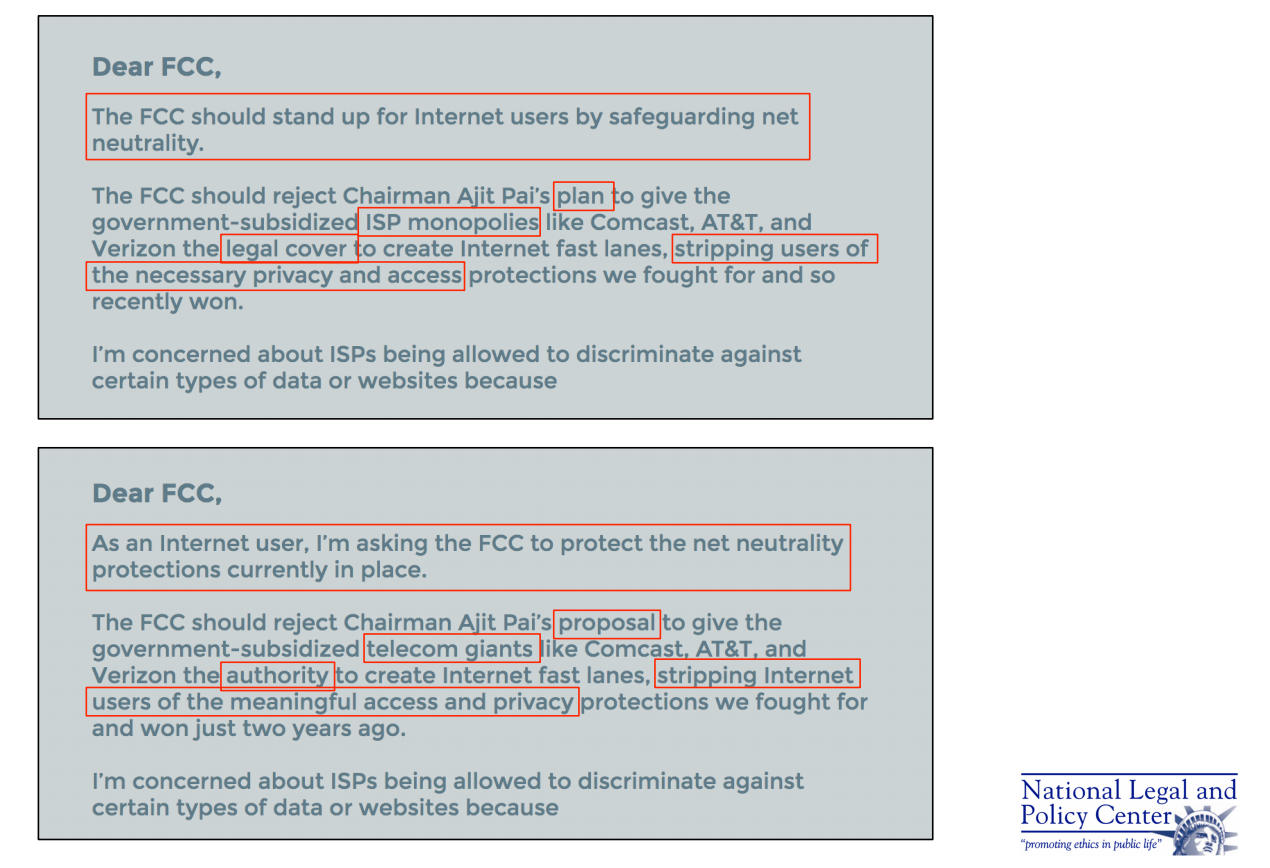 “Gaming a regulatory rulemaking in this way is highly deceptive and completely undermines the integrity of the public comment process. More troubling, the potential privacy breach of knowingly using other people’s email addresses without their permission to submit comments would be unprecedented,” Flaherty continued. “If our independent forensics analysis confirms that the deception is as extensive as the initial analysis indicates, we will submit our report to Congress and urge them to conduct a full and thorough investigation.”

The Daily Caller News Foundation (TheDCNF) did its own analysis of the FCC’s forum for public comments and found that hundreds of thousands of posts supporting net neutrality are likely fake.

After calling 10,000 people listed as “pro-net neutrality” commenters, only 44 percent answer “yes” when asked if they could recall submitting a public comment supporting the regulations imposed by the FCC under the Obama administration. Thirty-nine percent denied having submitted a comment or were unable to remember, while roughly 17 percent declined to answer the question.

Net neutrality is a nebulous principle that generally means internet service providers don’t have the right to discriminate against certain forms of traffic, including spam, nor to offer faster speeds to higher paying customers. For supporters, it means equal treatment for all forms of traffic. For critics, net neutrality is a government takeover of the internet that will prevent companies from investing in faster infrastructure and better services for consumers. (RELATED: AT&T CEO Bashes Obama-Era FCC, Says Net Neutrality Rules ‘Bad For The Industry’)

As noted in TheDCNF’s original report, fake “anti-net neutrality” comments also made their way on the forum as more than 128,000 identical posts under different names were discovered, according to ZDNet.

Like TheDCNF, ZDNet contacted the listed people, who later told the tech publication that they had not published messages on the FCC’s website. But unlike TheDCNF, which contacted 10,000 people, ZDNet reportedly called around “two-dozen people” and only directly spoke to a handful of them. (RELATED: Net Neutrality Activists Tied To Violent Groups, Convicted Al-Qaida Terrorist)

“The report is false. Not one name, email address, or email domain cited in the report matches any of the comments that came through EFF’s comment tool,” a EFF representative told TheDCNF, specifically referring to NLPC’s report. “Making the case for net neutrality doesn’t require fabricating names and addresses when real people across the country are speaking out for it every day.”