CNN had the audacity to over-analyze Trump’s “covfefe” Twitter typo on Wednesday night while having their own glaring typo in the chyron.

CNN and MSNBC have both spent a remarkable amount of time dissecting and analyzing the Trump tweet that read, “Despite the constant negative press covfefe.”

Clearly the president meant “coverage,” but that hasn’t stopped speculation that the tweet was indicative of a larger problem in the White House.

“People who talk to the president say he’s just kind of angry, not trusting of people around him, not happy with much of anyone around him. Does this tweet figure into that?” host Anderson Cooper.

Hilariously, the entire segment was titled “Twitter Typo” while CNN had their own typo in the chyron. 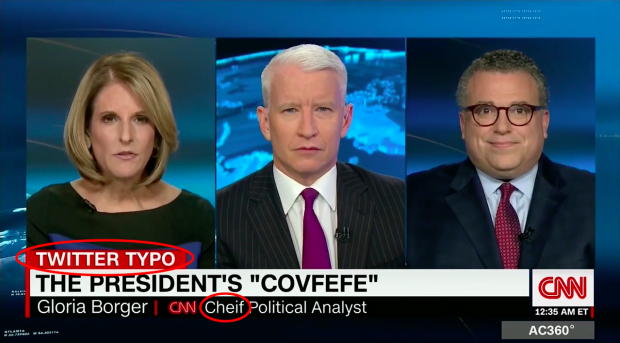 Does this mean CNN is “angry, not trusting of people…not happy?”