The Trump administration repeatedly declined to say if the president believes climate change is real nearly 24 hours after he announced that the United States will withdraw from the Paris climate accord.

Two members of the Trump administration — Scott Pruitt, the E.P.A. administrator, and Sean Spicer, the press secretary — dodged when reporters asked them to state Donald Trump’s position at the briefing Friday. 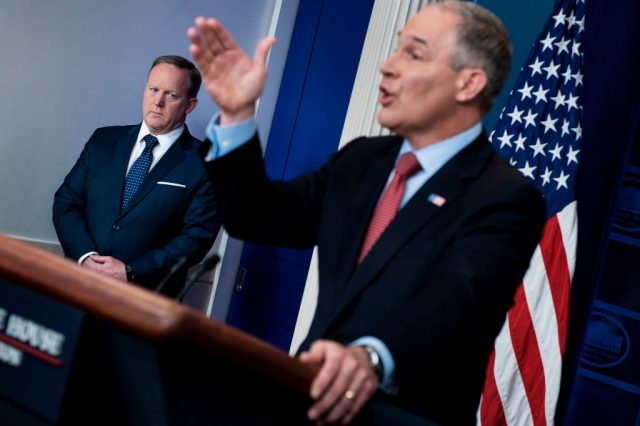 “What’s interesting about all the discussions that we’ve had for the last several weeks have been focused on one, singular issue: is Paris good or not for this country? That’s the discussions I’ve had with the president,” Pruitt said. “That’s been my focus.”

Pruitt was then asked a second time to clarify if the president believes climate change is happening.

Then a reporter asked about Pruitt’s personal views on climate change. He cited his confirmation hearing, when he admitted that global warming is occurring and human activity contributes to it “in some manner.”

Press Secretary Sean Spicer said he was still unaware of the Trump’s position on climate change, even though he was asked about days earlier at the daily briefing.

“I have not had an opportunity to have that discussion,” Spicer said.

In the days leading up to Trump’s announcement, he ignored shouted questions about his stance on climate change, though he made it clear in tweets years earlier.

Give me clean, beautiful and healthy air – not the same old climate change (global warming) bullshit! I am tired of hearing this nonsense.

Any and all weather events are used by the GLOBAL WARMING HOAXSTERS to justify higher taxes to save our planet! They don’t believe it $$$$!