Former Breitbart News reporter Katie McHugh is asking the public for financial help after being fired from the pub for tweeting anti-Muslim sentiments. She also called a man “Indian” in response to an insult.

McHugh tweeted about the London terror attack on Saturday night, saying, “There would be no deadly terror attacks in the U.K. if Muslims didn’t live there.”

When TV actor Pej Vahdat tried to challenge her by calling her a “moron,” she fought back by calling him an “Indian.” Vahdat is Iranian.

CNN was first to report the news of her firing.

McHugh worked for Breitbart News for three years. She previously worked at The Daily Caller.

The journalist is seeking funds because her health depends on it. A Mirror source says she has urgent health issues that require serious medical attention on an ongoing basis. She is seeking funds to pay for her healthcare and other living expenses.

McHugh did not return a request for comment. Neither did Breitbart‘s Editor-in-Chief Alex Marlow or Breitbart‘s crisis publicist Chad Wilkinson, who said he will never respond to my emails.

“Don’t expect to get anything from me in the future,” Wilkinson said last week, despite never giving me anything in the past or the present.

Wilkinson asked me to keep that detail off the record, but since I never agreed to converse with Wilkinson off the record, I’m reporting  it. I had asked him about Breitbart‘s plummeting traffic, which was recently written up in Vanity Fair.

(Just glad to know that Breitbart‘s “crisis communications” dude is stable in a crisis.)

Big League Politics Editor-in-Chief Patrick Howley knows a little something about being fired and suspended from Breitbart News. He ultimately resigned from the news organization in November. “I resigned after it was explained to me the day after the election that it was time for me to resign or be fired,” he said.

When questioned about McHugh’s situation, Howley told The Mirror, “I would encourage all these unnamed employees to leak to CNN about how triggered they are by comments on their own story. It’s the same thing with Michelle Fields and Milo [Yiannopoulis]. Alex Marlow doesn’t return your phone calls and then he goes on Slack and says so and so is no longer with the company. ”

Asked for permission to quote him on the record, Howley remarked, “I don’t do anonymous quotes. I’m not a new Breitbart writer.”

So what does Howley think about McHugh asking strangers for money?

“I don’t know,” he said. “That’s her business. I don’t weigh in on people’s business. If you work at Walmart putting inventory on shelves, you don’t go around trying to get someone else fired. You mind your own business. You worry about your own aisle. They [Breitbart employees] just have no idea how to get along in the real world. At Big League Politics, I would not tolerate someone throwing someone else under the bus. If you don’t like something someone else says, shut up about it and be happy you have the same privilege.”

Howley said his health insurance did not extend beyond his employment at Breitbart News.

See here to donate and below for an overview about the campaign: 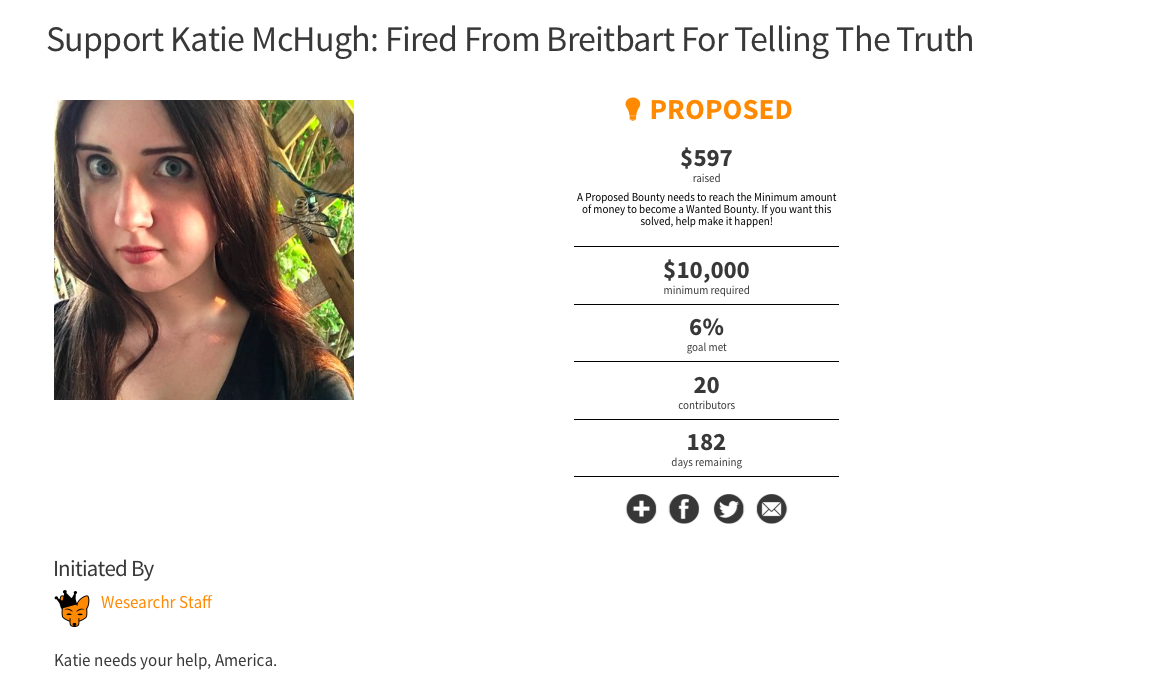