Kurt Eichenwald is feuding with your pal and mine Tucker Carlson again, and usually I’d say that’s pretty boring. Eichenwald reacting badly to criticism is nothing new. But what you’re about to read definitely is.

After Carlson name-dropped Eichenwald in a negative matter on his show on Tuesday night, Eichenwald responded on Wednesday with an hours-long tweetstorm targeting the Fox News host…

During this one-sided Twitter war, Eichenwald last night tweeted this picture of him holding up that anti-Semitic flyer to prove its authenticity while defending someone else who received the same thing.

Yah, crappy photoshop Max. Unfortunately, no, this is what I got today. pic.twitter.com/jmi1U4wLUd 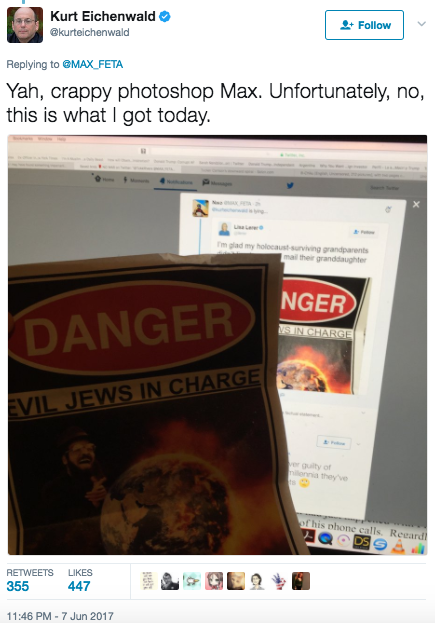 Here’s what some eagle-eyed Twitter users noticed about that screencap from Kurt’s computer:

I’d tell everybody to give you a hand, Kurt, but you’ve taken care of that part already. Enjoy your Thursday.

…some to show her it was real. But I couldn't find any – & ended up w/ this. My family reads my twitter feed, so they know this is true.