Pyongyang claims the “new-type ground-to-sea cruise rocket” gives the country a “powerful attack means capable of striking any enemy group of battleships.” The weapon, a coastal defense cruise missile (CDCM), was fired from an area near Wonsan on the east coast and flew roughly 120 miles. 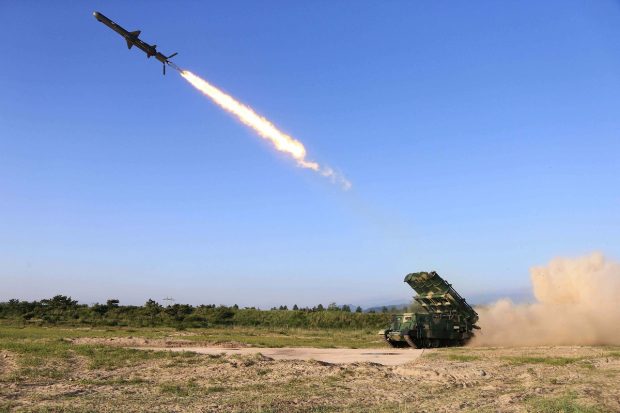 The anti-ship missile system, which resembles the Russian Kh-35 and represents an improvement over the older Kumsong-3 systems, appears to be the same system that appeared in a massive military parade in April.

this is probably what North Korea fired today: the cruise missiles that it displayed during the April 15 military parade pic.twitter.com/dXQJZ4TNYT

During Thursday’s test, North Korea fired a salvo of four land-launched anti-ship cruise missiles into a dummy vessel at sea, with at least two hitting the target, according to pictures from the Rodong Sinmun.

The images show that the ship was anchored, and there is no visible wake behind the target, indicating that the cruise missiles were probably not tested under combat conditions.

The new anti-ship cruise missiles are carried on a tracked transporter erector, which North Korea has been using for more and more weapons systems to provide the ability to traverse harsh terrain, a necessity in a country with limited roads. Increased mobility offers more protection against pre-emptive strikes, increasing survivability.

The North claims that the test verified the CDCM’s “rapid entry” and “ultra-low cruise flight system.”

The new CDCM, together with the improved Pongae-5 (KN-06) surface-to-air missile system tested a few weeks ago, offers North Korea limited anti-access, area-denial (A2/AD) capabilities. It is highly unlikely that these systems, while representing achievements for the North, would hold up against the superior firepower of the U.S. or South Korea.

North Korea will probably need to advance its intelligence, surveillance, and reconnaissance abilities to give its newer systems a meaningful edge for a potential combat scenario.