Things in the D.C. swamp are heating up.

After a record long spring of five days, it is officially summer here in the DMV. It takes a unique city to possess the skill of snowing one day and scorching temps the next, but D.C. has got it down pat. Monday marks one of the hottest days yet, with temperatures climbing up into the 90’s.

You can only imagine my enthusiasm when I was asked to write the highly coveted story about the weather. Yes, the weather. The only thing worse than writing about the heat is being asked to go outside so I can confirm that 90 degrees is in fact hot as f***. As an intern though, I swallowed my pride, doubled up on deodorant, and took to the streets of D.C. to see how people were coping.

Greeted by the sticky, moist air, I was instantly flooded with regret over my decision to A. wear black B. drink hot coffee and C. wear my hair down. Three minutes into my walk down 17th street I felt the first bead of sweat drop, a dreaded signal that it was only a matter of time before I’d be a walking raincloud.

I stopped for water at a food vendor on the corner where Mary, a middle aged woman, was camped out in her mobile cart with a roof and two umbrellas for reinforcement.

Mary recalled the hottest day she ever worked over the past 26 years. 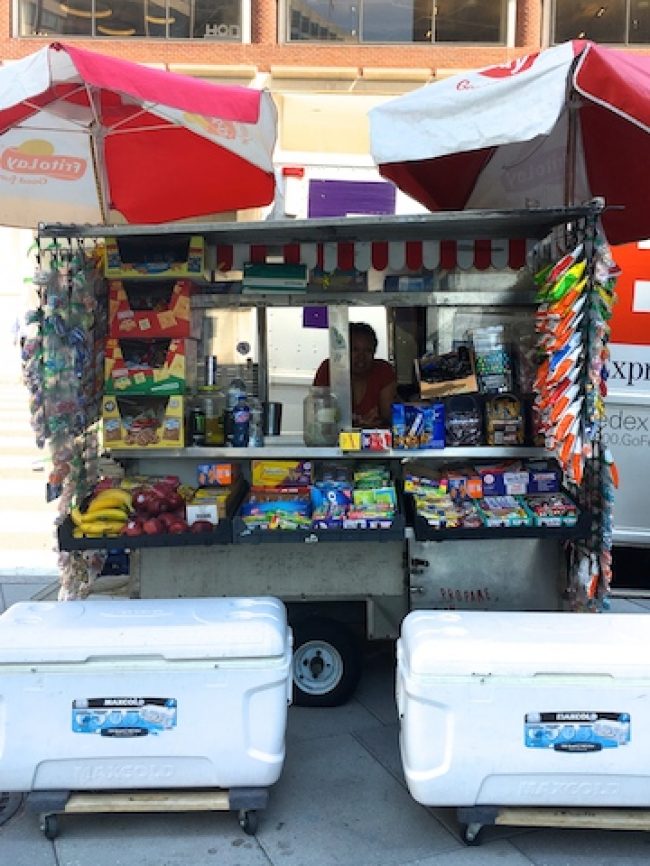 “It was two years ago. It was 100 something degrees. It was tough,” Mary said.

For Mary the heat wouldn’t be so bad if it wasn’t for the grill resting 10 inches to her left. As the gentleman behind me ordered a hotdog, the smell of smoke wafted through the air, followed by a surge of heat. Mary was a real trooper.

By the time I reached The Mayflower hotel, a one-minute walk at most, I decided I deserved a shade break. While trying to nonchalantly hang out under the awning in an attempt to cool down, I met Fred, who has worked as a concierge at the hotel for the past 24 years.

Sporting black pants, a pea coat-esque top, and a black hat, Fred offered some valuable wisdom. “The hat is the hottest part of the outfit,” Fred said. “You just got to use a cold, wet towel and just keep wiping.”

Fred seemed like the perfect candidate for a question I think everyone wonders: What kind of deodorant works best in this humid weather?

Unfortunately, I’m disturbed to report that Fred does not use deodorant, but claims to “still smell nice.” Yes, you read that correctly. I cannot confirm or deny this statement, as I made sure to maintain a safe distance from Fred for the remainder of our conversation. Readers, if you are ever in D.C., please vist The Mayflower at your own discretion. 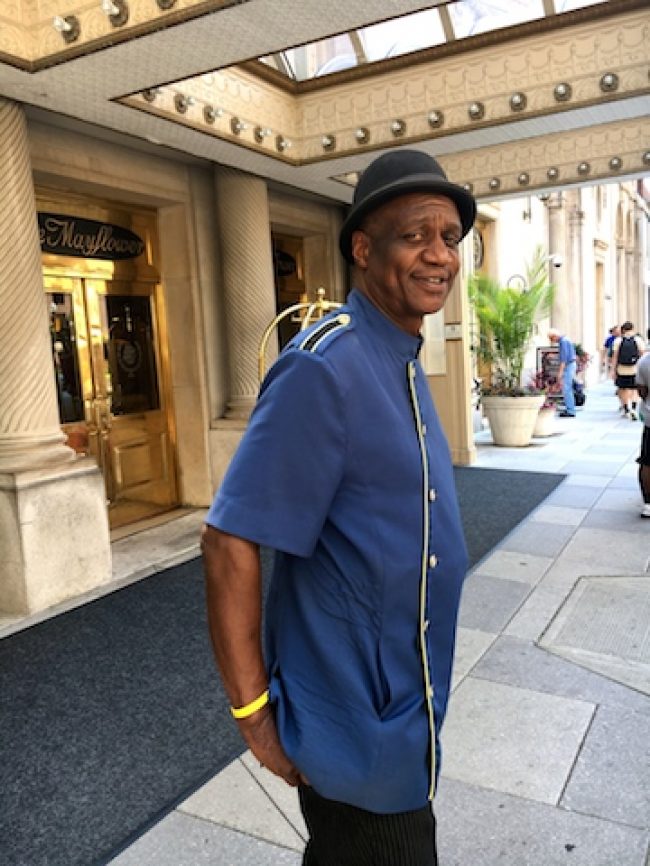 Still searching for an answer, I posed the same question to Rudy, a homeless man sitting crisscrossed on the street. The jeans and camouflage T-shirt wearing old man suggested Right Guard deodorant. While I took this answer with a grain of salt, it was refreshing to hear that some people do still care about their hygiene.

“I love the hot weather and I can stand it because I was born on June 8,” Rudy said.

If anyone could please explain to me his logic regarding the correlation between his birthday and his heat tolerance, I’m an open ear. Either way, major props to Rudy for sticking out this unbearable weather. 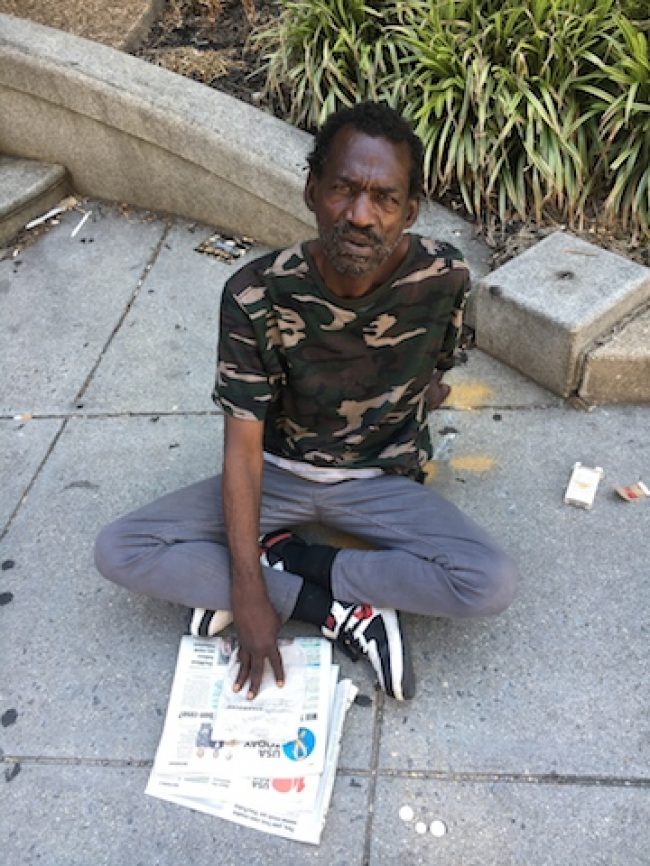 By the time I reached Washington’s famed Dupont Circle neighborhood, I was about ready to call it quits. My hair was glued to my neck and my dress was stuck to my skin when I came across a shirtless vagabond named Solomon, or, as he likes to call himself, “The Angler Fish.”

With his hair tied back in a ponytail, Solomon flaunted a fresh black eye and a medley of colorful beaded necklaces. He claimed his look was part of his “camouflage.” What better way to blend into a metropolitan city then go shirtless, right?

The Charleston native is in D.C. “just chilling,” while wrestling with the idea of “maybe going to law school at Georgetown or American University.”

“This ain’t heat,” Solomon protested. “F*** yeah it’s hot, but not like Charleston.”

Thing’s took a strange turn when Solomon started asking me some odd questions like, “Do you want me to buy you alcohol?” and “Do you have a boyfriend or a girlfriend?”

Solomon is a shoo-in at Georgetown law with those interrogation skills.

I’m rooting for you, Solomon. 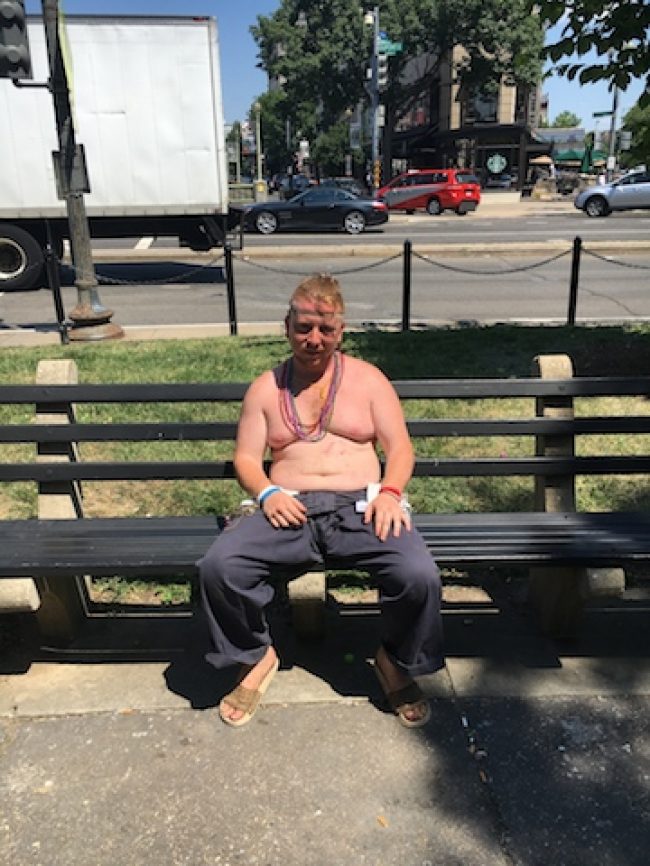 To wrap up this horrible D.C. assignment, I hit up the closest Starbucks where employee Ciara fixed me a cup of refreshing iced coffee. Ciara estimated that the store sells about 600 cups of iced coffee a day in the summer, compared to a mere 30 or so in the winter.

“In the summer time it’s almost always iced coffee and cold brew. It’s a big difference cause our hot drinks that come out during the holidays are really popular,” Ciara said.

Her personal favorite summertime drink is an iced caramel macchiato. 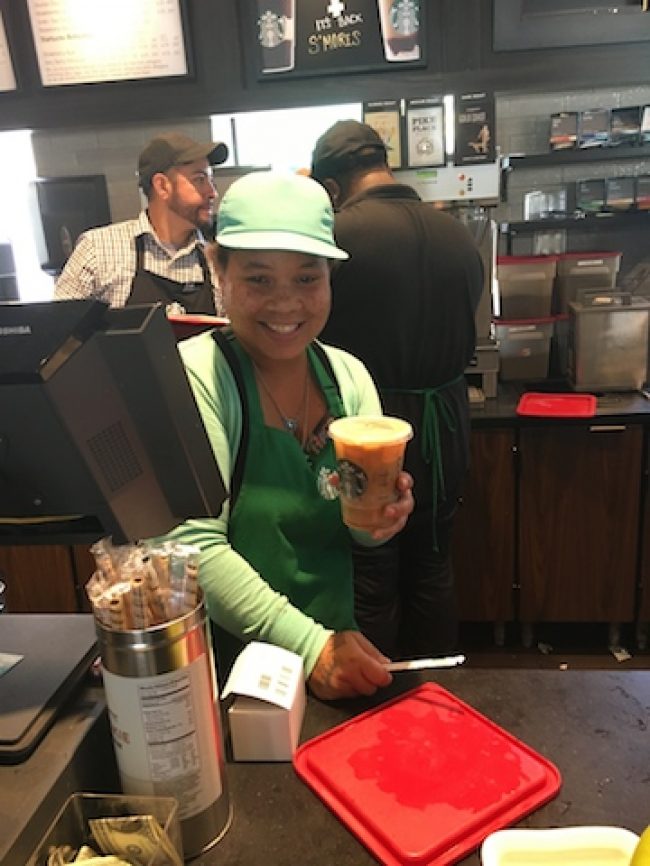 One watch tan, two cups of iced coffee, and three gallons of sweat later, I returned to work with a new, slightly concerning perspective of D.C.

For those of you hoping to find some advice on how to tackle the summer heat, all I can tell you is wear Right Guard, drink an iced cameral macchiato, and when in doubt, do as Solomon does, and go shirtless.