The Penguins scored both of their goals with less than two minutes to go in game six, with the first goal coming from Patric Hornqvist and the second goal from Carl Hagelin.

The @penguins score with 1:35 left in the third! #StanleyCup pic.twitter.com/Q5ANKnKfxP

This is the fifth Stanley Cup for the Penguins and the third for legendary Penguins star Sidney Crosby. The win means the Penguins are now back-to-back champions. 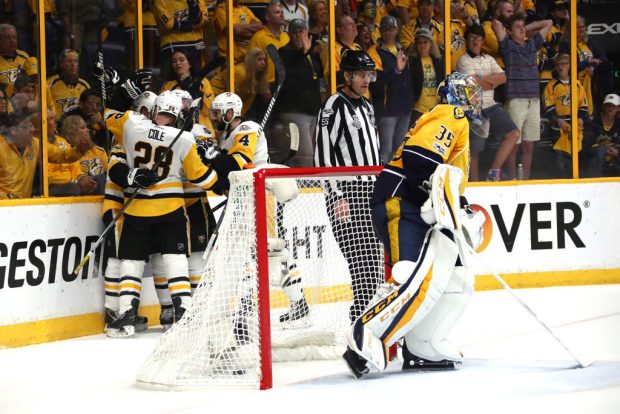 NASHVILLE, TN – JUNE 11: Patric Hornqvist #72 of the Pittsburgh Penguins celebrates with teammates after scoring a goal against Pekka Rinne #35 of the Nashville Predators during the third period in Game Six of the 2017 NHL Stanley Cup Final at the Bridgestone Arena on June 11, 2017 in Nashville, Tennessee. (Photo by Bruce Bennett/Getty Images)

An early goal from the Predators was called off due to an early whistle, despite the fact it was clearly a goal.

There is no doubt that call will be the focus of discussion for a long time.