MSNBC’s “Morning Joe” spent a large portion of Wednesday’s program butchering President Trump for the sycophantic White House cabinet meeting in which the president heartily praised himself and members gushed about him.

On Tuesday, the panel mocked the meeting by heavily complimenting one another.

“Talk about diversity,” she said a little after 7 p.m., “let me just say there are no real men in the inner circle of the White House. None at all.”

Her fiancé Joe Scarborough blasted in via satellite to say, “Well, there’s your headline.”

Meanwhile, during one of the many commercial breaks, the program flashed Hollywood-esque pictures of the “Morning Joe” couple.

There was this shot of Joe and Mika at what looks to be a farm or a cornfield.

Looking very J.Crew, Joe’s MANLINESS was on display in fashionable dark sunglasses and bright orange trousers and Mika’s ultra-feminine air in a breezy, short blue sundress as she perched on a wooden fence. 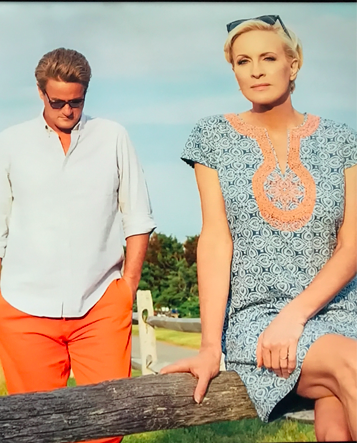