Van Jones responded Thursday to a video released by conservative muckraker James O’Keefe in which the CNN contributor appeared to call the Trump-Russia investigation a “nothing burger.”

Jones, a progressive activist and former member of the Obama administration, said that his comments in the video were taken out of context. He says he believes that members of the Trump campaign likely did collude with Russian operatives during the presidential campaign, but he doubts there is a “real smoking gun” proving it.

“If you take any one line of my argument out of context, you can use it to pull off a hoax. That’s what O’Keefe’s minions did,” Jones writes in a piece at CNN.com.

“The notion that I think Trump is innocent of all wrongdoing in Russiagate is ludicrous. But perhaps the people on team Trump can afford to live in a fantasy world.” (RELATED: Undercover Video Reveals CNN’s Van Jones Calling Russia Story ‘A Nothing Burger’)

In a video released Wednesday, an operative for O’Keefe’s group, Project Veritas, approached Jones, asking him: “What do you think is going to happen this week with the whole Russian thing?” 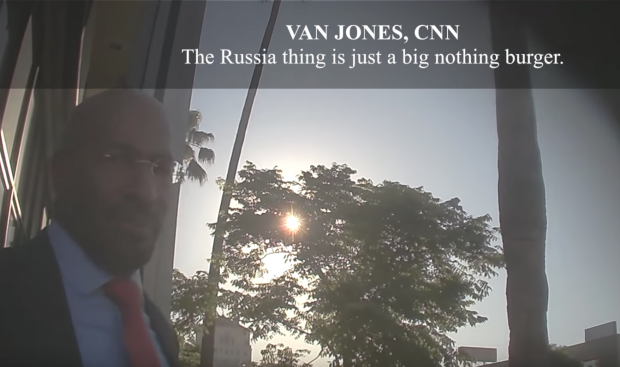 Jones greeted the man, and shook his head.

“The whole Russia thing is a big nothing-burger. There is nothing you can do –,” he said before trailing off as another man approached.

Conservatives jumped on the video as further evidence that CNN’s coverage of the ongoing investigations into potential collusion between the Trump campaign and Russia. (RELATED: CNN’s Month-Long Nightmare)

On Tuesday, Project Veritas released a video of a secretly recorded conversation with a CNN health unit producer who said he believed that the network covers the Russia investigation to boost its ratings.

“If it is accurate, I think it’s a disgrace to all of media, to all of journalism, I think that we have gone to a place where if the media can’t be trusted to report the news, then that’s a dangerous place for America,” Sanders said.

Jones insists that he did not mean that believes that the allegations that Trump adviser colluded with Russians during the campaign.

“Did I mean that there is ‘nothing’ to the allegations that members of team Trump colluded with the Russians and then tried to cover it up by firing FBI Director James Comey? No — and far from it,” he writes.

Instead, Jones says he believes that the Russia investigation, even if it turns up evidence implicating the Trump campaign, will likely not have political implications for Trump.

“In other words, no evidence is going to emerge (‘THIS WEEK,’ soon, or maybe ever) that is powerful enough to force the craven GOP to oust Trump,” Jones asserted.

“Too many Democrats see the Russia controversy as some kind of magical ‘get out of jail free’ card. They insist that we will be delivered from our misery — as soon as the next shoe drops and Trump is impeached.”

Jones also says that Democrats have been distracted by the Russia probe.

“I have been consistently pushing my fellow Democrats to deal with bread and butter issues — and not just hope and believe Trump will be impeached and gone tomorrow. I have been beating this drum for weeks now,” he writes, pointing to a recent Twitter exchange in which he said that the investigation diverts attention from issues like jobs, poverty and the opioid addiction crisis.

Jones went on to say he believes that Russian president Vladimir Putin “must have something over Trump.”

“Putin is the only person (besides Ivanka) whom Trump never disses. Given how Trump lashes out at everyone else, that fact alone is fishy,” Jones writes.

He added that he believes “there probably was collusion” between members of the Trump campaign and Russian operatives.