The Philippines has paid in blood for unclear gains in a drug war in which victory remains elusive.

President Rodrigo Duterte rose to power in summer 2016, vowing to stop mass drug abuse and rampant lawlessness by any means necessary, including murder. Following through on campaign promises to kill tens of thousands, the president launched a shoot-to-kill drug war one year ago today to exterminate drug criminals.

“Get out if you are doing drugs or other crimes,” the president said after taking office. “If you don’t, I’ll kill you.”

“To all the military men listening and to all the police officers, go out and hunt for them,” he added. 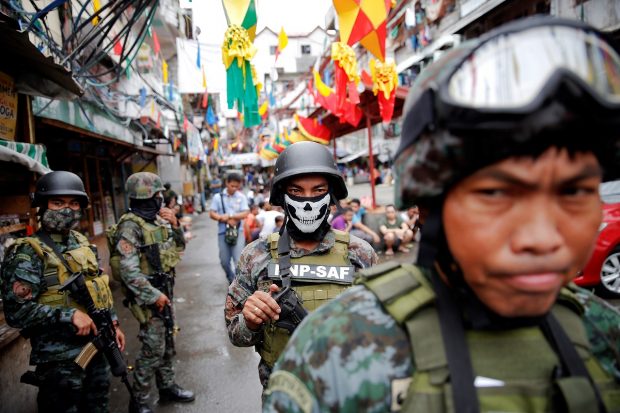 The Duterte administration claims that the anti-narcotics campaign has been a tremendous success, but those in opposition call the war on drugs a failure with no upside. Those critical of the war point to the the continuation of the drug trade and the lives lost in the struggle, while the Duterte administration highlights the number of criminals now off the streets and the elimination of narcotics in Philippine society.

“Without a doubt, the president’s anti-drug war is a success,” Secretary for the Presidential Communications Operations Office Martin Andanar said in December 2016, claiming that more than one million drug pushers and users had turned themselves into authorities. He said the 32 percent drop in crime represented “the real score in the government’s intensified anti-drug operations,” while ignoring the more than 50 percent increase in domestic homicides.

He said the government will “continue to seize the momentum until the last drug pusher is out of the street.” 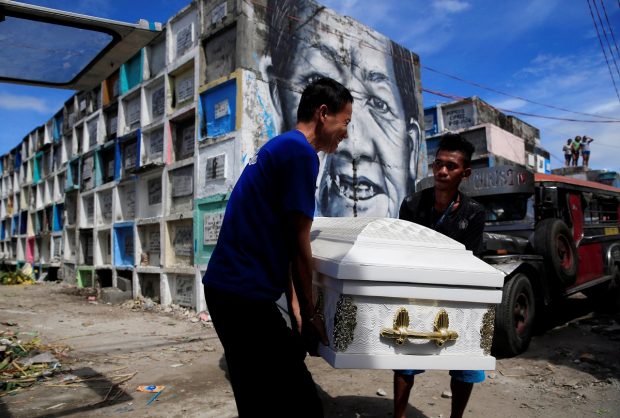 Graveyard workers carry the coffin of Eddie Languido, 56, victim of a summary execution by unknown assailants related to the drug war, during his funeral, attended by his son and friends, at the Navotas cemetery, north of Metro Manila, Philippines, Jan. 31, 2017. REUTERS/Romeo Ranoco

Andanar repeated the administration’s proud claims of success Tuesday, citing the surrender of 1.2 million people involved in the illegal drug trade, the confiscation of drugs and related paraphernalia worth billions of dollars, and decreased crime across the country. The government also claims that numerous addicts are receiving proper treatment through the state public health programs.

While touting rising arrests, the state often fails to bring up overcrowding in prisons, where conditions are deteriorating rapidly and communicable diseases and other related problems are spreading. Far more troubling, though, is the situation in the street. 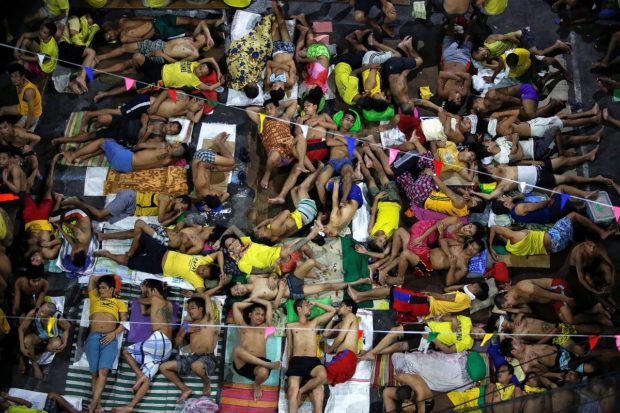 Thousands of people, including young children, have been killed over the past year.

Duterte, nicknamed the “Punisher” for his brutal crime management tactics as the mayor of Davao, which allegedly involved the use of death squads, has previously claimed that there are 3.7 million drug users, although estimates from the Philippine Drug Enforcement Agency and Dangerous Drugs Board are significantly higher and lower respectively. “I have to slaughter these idiots for destroying my country,” he said during his State of the Nation address. In another speech, he said that he would like to slaughter drug addicts as Hitler did the Jewish people.

“He is a child of privilege turned populist politician, an anti-drug crusader who has struggled with drug abuse,” The New York Times wrote in a detailed report on Duterte’s rise. “Obsessed with death, he has turned his violent vision into national policy.”

Following the largest drug bust in the history of the Philippines, Duterte reportedly expressed surprising dissatisfaction because the police did not kill the detained suspects. “I would have shot them dead on the spot,” he said angrily. 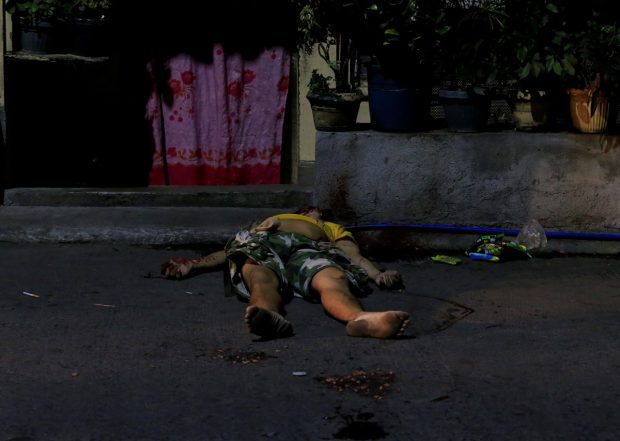 The body of a suspected drug pusher, whom police investigators said was shot and killed by unidentified men, lies along a street in Quezon city, metro Manila, Philippines, March 1, 2017. REUTERS/Romeo Ranoco

Duterte’s approach to the narcotics problem in the Philippines has been one of intense violence. Since the start of the drug war a year ago, over 5,000 people have been killed by security forces and vigilantes in police operations and extrajudicial executions. Human rights organizations, however, report a much higher death toll and demand an independent investigation into the regular killings.

In the early days of the anti-narcotics campaign, between 30 to 40 people were killed each day.

Among the dead are more than a few innocent children, which the president often calls “collateral damage.” The children to whom Duterte refers include victims like 5-year-old Danica May Garcia, who was shot and killed in her family’s store, and 6-year-old Francis Navarro, who was murdered in his sleep. The Children’s Legal Rights and Development Center, a non-governmental organization, reported that as of January, more than 30 children had been killed in Duterte’s war on drugs. 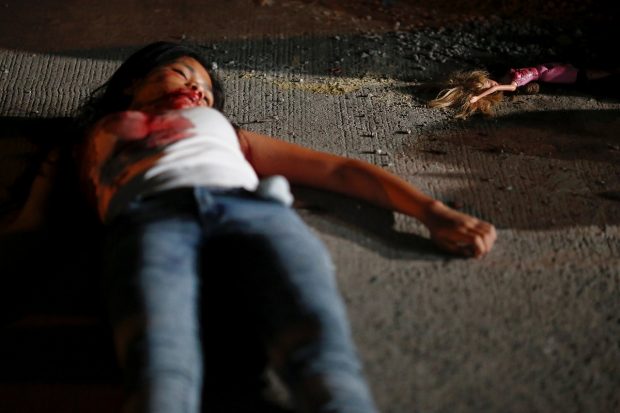 A girl lays dead next to her doll after she and her friend were killed by unknown motorcycle-riding gunmen, in an alley in Manila, Philippines, Oct.26, 2016. According to the police, a sign on a cardboard reading “Tulak ka, hayop ka”, which translates to “You are a (drug) pusher, you are an animal” was found with the body of girl’s friend. REUTERS/Damir Sagolj

Children suffer in other ways as well, as the drug war has orphaned thousands of kids, many whom watched their parents die tragic deaths at the hands of police and vigilantes.

Although the anti-narcotics campaign has taken a devastating toll on society, the war on drugs enjoys the appearance of domestic support. The drug war had an 85 percent approval rate in December, but some observers claim that critics have been cowed into silence.

The war does have legitimate supporters, though. A man named Roberto Ramos buried his 7-year-old daughter in October. She was reportedly found dead in a cemetery with a rag in her mouth. She had been raped and murdered by a drug addict.

“She was a happy girl,” Ramos said at the funeral. “It’s better they all die,” he added, turning his attention to domestic drug criminals. “I would really kill if you harm our children,” Duterte said of the drug war in April. The administration has stated on several occasions that the anti-narcotics campaign is an effort to build a better future for the younger generations.

Despite positive government rhetoric, one statistic in particular has raised questions about the success of the war on drugs, and that is the price of crystal methamphetamine, or shabu. 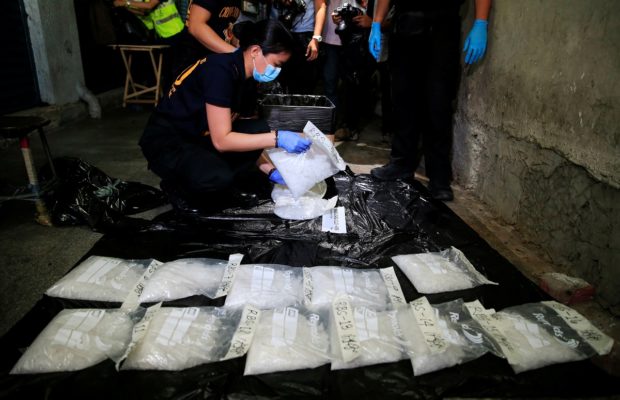 A police investigator makes an inventory of the methamphetamine, locally known as shabu, worth 120 million pesos ($2.41 million), that was confiscated during a drug-buy bust police operations in a mall at a Guadalupe city, metro Manila, Philippines, Nov. 21, 2016. REUTERS/Romeo Ranoco

The price of crystal meth has dropped in the capital city of Manila, albeit only slightly. One gram of shabu cost $24 – $220 in July 2016, but now one gram runs for $20 – $300, with the wide ranges largely attributable to variations in availability by regions. “The price of shabu has always been a supply and demand issue,” explained Rep. Gary Alejano. “The scarcer the supply, suppliers can demand high prices for the commodity. On the contrary, the (more) abundant the supply, the cheaper the commodity. This only goes to show that the war on drugs has failed.”

In some regional centers, the cost of shabu has risen, suggesting that production has taken a hit but distribution persists. The PDEA asserts that meth imported from overseas is filling gaps in the market as authorities cripple domestic drug labs.

The data suggests that the Philippines has been applying extreme violence to a problem surrounded by a cloud of suspicious statistics for gains that are impossible to accurately quantify. Durterte’s war on drugs has drawn significant international criticism from certain Western democracies, international organizations, and human rights groups. 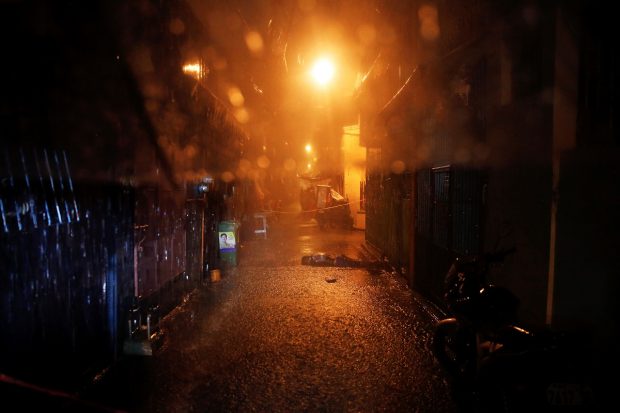 Heavy rain pours as the body of a man killed by unidentified gunmen riding motorcycles is left in a narrow alley in Manila, Philippines, Oct. 11, 2016. REUTERS/Damir Sagolj

“The government likes to crow about its successes in its ‘drug war’ but it is absolutely unwilling to allow any meaningful examination of what that drug war has actually inflicted on Philippine society,” Phelim Kine, deputy Asia director at Human Rights Watch told The Daily Caller News Foundation. “Duterte has created what he calls a ‘drug emergency’ based on flawed or outright fabricated statistics about the nature of drug dependents and drug abuse problems in the Philippines.”

“The Philippine National Police and the Philippine government have in recent months issued a series of increasingly confusing and contradictory statistics,” he explained. “This appears to be a deliberate ploy to create confusing perceptions of the severity of the drug war and to try to mitigate international criticism.”

“This is a human rights calamity built on lies fueled by more lies,” Kine added. “There is no upside to any of that.” Human rights organizations assert that the Duterte administration is guilty of crimes against humanity.

Amid rising international criticism, the Duterte administration has reportedly silenced domestic critics. Senator Leila De Lima, who attempted to launch an investigation into the wrongful killings in the drug war, was imprisoned on what some observers call politically-motivated charges. “Killing continues with zero accountability,” Kine told TheDCNF.

Duterte has created a situation where people, police and vigilantes alike, can “commit murder with impunity,” explained Kine.

“We no longer have any fear, nor does it bother our conscience every time we kill these people,” a vigilante explained to The New York Times in March. “We kill people who are a menace to society.”

Kine further explained that the anti-narcotics campaign is less of a war on drugs and more of a brutal assault on the most vulnerable, most marginalized people in the Philippines. He argues that the butcher’s bill for the war on drugs is “thousands of deaths of poor Filipinos and absolutely zero relevant policy initiatives to address drug issues in the Philippines.” 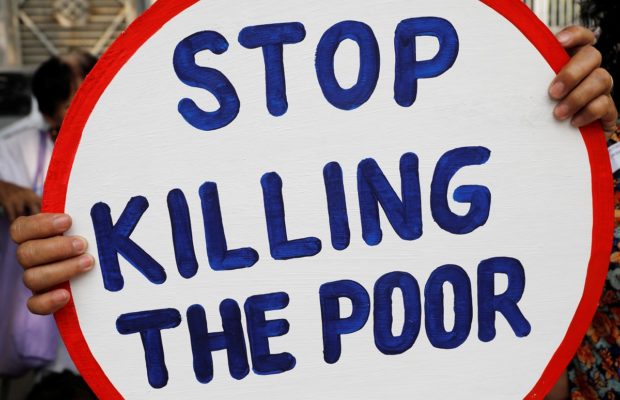 There have even been reports of police turning poverty-stricken Filipinos into contract killers, offering meager payments in return for assassinations and death for refusal.

Duterte initially promised to eradicate drugs in the Philippines in three to six months. After missing the deadline, he vowed to fight the drug menace until his last day in office.

The PNP, PDEA, and DDB did not respond to requests for comment prior to publication.