North Korea has successfully tested an intercontinental ballistic missile, according to state media.

North Korea launched the Hwasong-14 ICBM Tuesday morning from an airfield in Banghyon, North Pyongan Province. The missile reportedly flew for about 40 minutes and covered a distance of nearly 600 miles. It flew to an altitude of more than 1,700 miles. 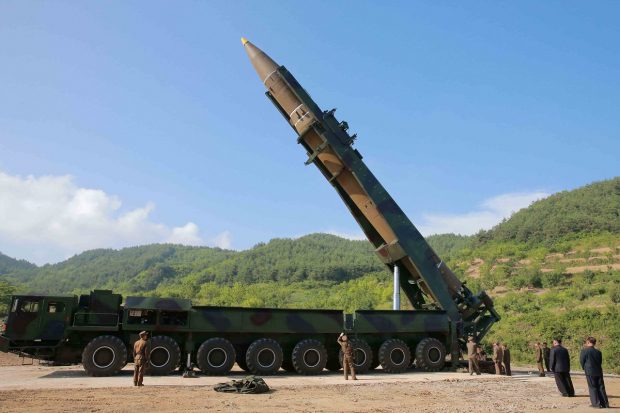 North Korean dictator Kim Jong-un warned in his New Year’s address that the country was close to testing an ICBM. “We have reached the final stage of preparations to test-launch an intercontinental ballistic missile,” Kim said, adding that, “research and development of cutting edge arms equipment is actively progressing.” In response, President Donald Trump, who had not yet taken office, tweeted, “It won’t happen!”

Since Trump became president, North Korea has launched over a dozen missiles, including short-, medium-, and intermediate-range ballistic missiles, as well as surface-to-air and coastal defense cruise missiles.

“The series of recent strategic weapons tests show that we are not too far away from test-firing an intercontinental ballistic missile,” North Korean state media said in June. “The DPRK is about 10,400 km far away from New York. But this is just not a long distance for its strike today.”

U.S. Pacific Command has assessed that Tuesday’s missile was an IRBM, a weapon with a much shorter range, but the available launch data suggests it could be an ICBM.

In the wake of Tuesday’s launch, North Korea declared itself “a full-fledged nuclear power that has been possessed of the most powerful inter-continental ballistic rocket capable of hitting any part of the world.” While that is an exaggeration, expert observers estimate that the range could be around 4,000 miles, enough to put Alaska in range.

North Korea claims that its new weapon gives it the ability to end U.S. aggression.