Students voiced concern over a California college system’s new LGBTQ director, who said he is “wary of” white gays and well-meaning white women,” in an article published Friday.

Dr. Jonathan Higgins made these remarks and others on his Twitter account, which he locked Friday morning, but archived tweets from which can be viewed here. Students expressed concern with his comments, including one in which Higgins linked the police to “protect[ing] white supremacy,” in conversations with The College Fix.

Higgins responded to a tweet asking “who are you automatically wary of/keep at a distance because of your past experiences?” by saying “white gays and well-meaning white women” in April. 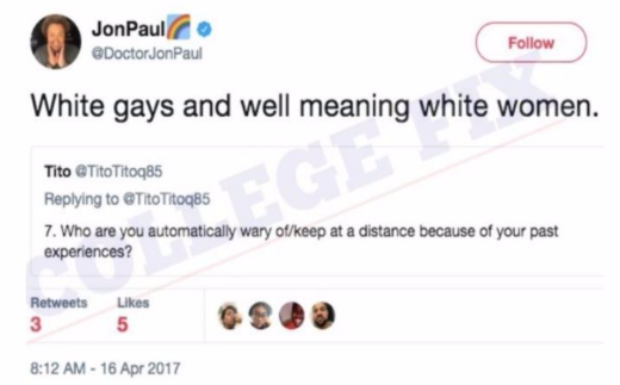 “I finally have nothing to say other than police are meant to service and protect white supremacy,” Higgins said in a December 2016 tweet.

“My family is heavily involved in law enforcement and because I have many siblings and cousins, all of whom I support and love deeply, who serve as officers,” a gay student told The College Fix. “My family will only ever be seen as enforcers of white supremacy in Higgins’ eyes with myself as an enabler.”

Another white gay student anonymously told The College Fix that they did not think they would be treated fairly by Higgins.

In yet another tweet, the doctor linked the idea of a “heterosexual pride day” to homophobia, rape culture and transphobia.

“So y’all been real quiet about #heterosexualprideday,” he said in June. “I mean I thought I’d see parades celebrating rape culture, homophobia and transphobia.”

“Oh wait: y’all do that everyday,” he commented later. 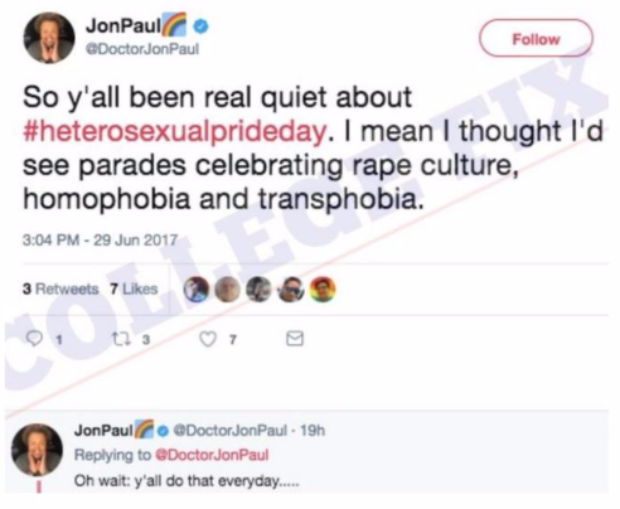 One anonymous transgender student at Claremont took issue with this remark by Higgins.

“Only through a long, difficult journey have I arrived at the conclusion that I am heterosexual,” the student told The College Fix. “Much of the success of this powerful journey comes as a result of my wonderful mentors who are open-minded to every possibility. Based on his statements on social media, it is clear that Dr. Higgins associates heterosexuality with only negative causes and that he thinks to be openly proud of one’s heterosexuality, as I am, is to ‘celebrate rape culture, homophobia and transphobia … everyday.'”

The Daily Caller News Foundation reached out to Claremont Colleges and a representative for Higgins for comment, but neither party responded in time for publication.