President Donald Trump said Friday that Mexico will “absolutely” pay for a wall on the U.S.-Mexico border during a meeting at the G20 summit with Mexican President Enrique Pena Nieto.

It was Trump and Pena Nieto’s first meeting since Trump visited Mexico during the presidential campaign. The Mexican president was supposed to visit in January, but canceled after Trump continued to insist that Mexico would pay for the border wall. 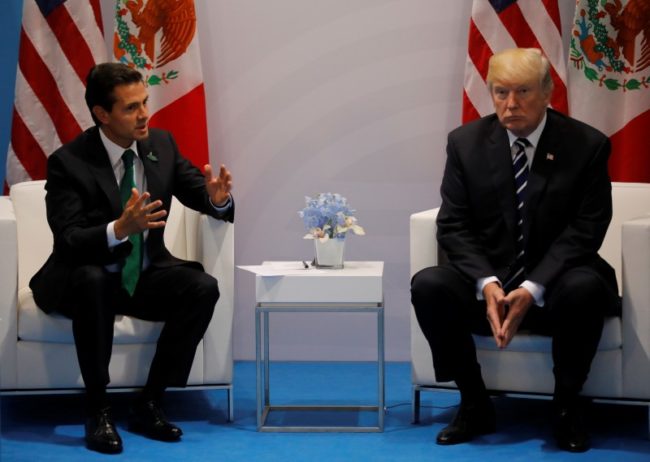 Building a southern border wall and having Mexico pay for it was a key part of Trump’s campaign. The border wall is estimated to cost $21.6 billion. The White House’s 2018 budget request only calls for a fraction of this money, just $1.6 billion to construct 60 miles of new walling.

Director of the Office of Management and Budget Mick Mulvaney speaks about the budget agreement reached by Congress with a picture of construction of a wall on the southern border during a press briefing at the White House in Washington, U.S., May 2, 2017. REUTERS/Joshua Roberts

This border wall construction is expected to start in spring 2018 and the White House remains unclear about how Mexico will actually pay for it. It is at least clear that Mexico will not be paying upfront.

Mexico’s foreign minister, Luis Videgaray, said after the meeting, “The issue of the wall was not discussed, it was not part of the conversation.”