NASA plans to use a pair of converted 1950s bomber jets to watch a solar eclipse in August.

Americans will be able to see the sun disappear behind the moon Aug. 21, darkening skies all the way from Oregon to South Carolina. NASA will monitor the eclipse with two refurbished Martin B-57 Canberras, which are twin-jet tactical bomber and reconnaissance aircraft that debuted in 1953.

The U.S. Air Force retired the aircraft in 1983, but NASA held onto three of them because they can fly to high altitudes.

“We are going to be observing the total solar eclipse with two aircraft, each carrying infrared and visible light cameras taking high definition video,” Amir Caspi , a researcher on the project, told Universe Today. “These will be the highest quality observations to date (of the solar corona) of their kind, looking for fast dynamic motion in the solar corona.” 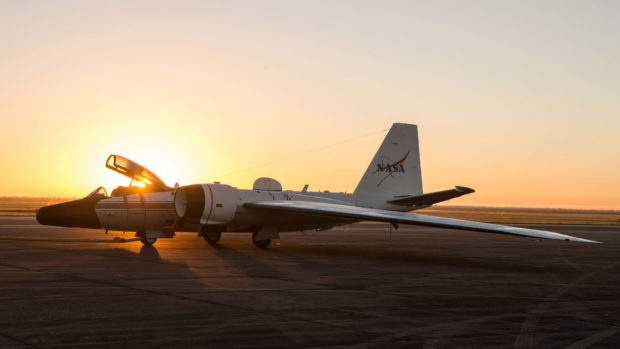 Flying at 50,000 feet, the Canberras will intercept the 70 mile wide shadow of the moon and use it to conduct astronomy research. The former bombers will fly with the shadow for roughly eight minutes, constantly photographing it.

Total solar eclipses provide researchers with a unique opportunity to study the sun’s outer atmosphere. NASA is planning a battery of experiments during the eclipse, and will also use the planes to image the planet Mercury.

The shadow will be moving at 1,400 miles per hour, roughly twice the speed of sound. The aircraft’s speed of 470 miles per hour will allow it to remain in the eclipse’s shadow for about eight minutes, as opposed to two minutes and 40 seconds for a stationary point on the ground.

NASA uses the three Canberras as high-altitude scientific research aircraft, as well as for testing and communications. NASA says the conduct ground mapping, cosmic dust collection and rocket launch support serve as a test bed operations for spaceborne systems. The Canberras are assigned to NASA’s Johnson Space Center and are based near Houston, Texas.