It’s another beautiful afternoon in America, and here I am again on the verge of war with multiple media outlets.

It all started at lunch this afternoon. A few coworkers and I went to a local restaurant to grab a quick bite to eat. The wings were sub-par and my coke was not great. Apologies to all my readers who would have expected me to order a beer.

Anyways, all of a sudden a coworker handed me their phone showing me a tweet that read, “the daily caller’s thirsty swimwear coverage has gone meta.”

The sarcastic tweet was from Business Insider reporter Max Tani, and featured three headlines of mine regarding the rights of women in America and how cool outdoor showers are.

I didn’t think much of it. I’d never heard of Tani before, and while Business Insider is an interesting publication, I didn’t think it was worth my time. However, I quickly noticed something sinister.

The tweet had been liked by Elise Foley of HuffPost and Oliver Darcy of CNN. Now my interest was piqued. 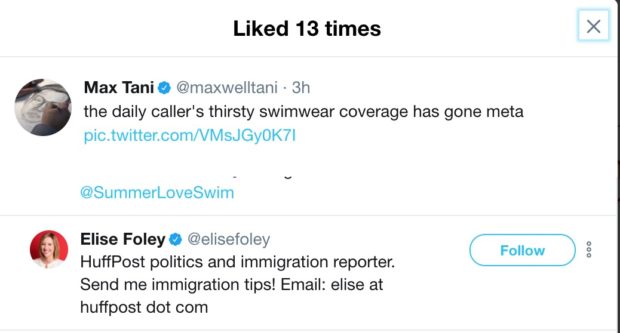 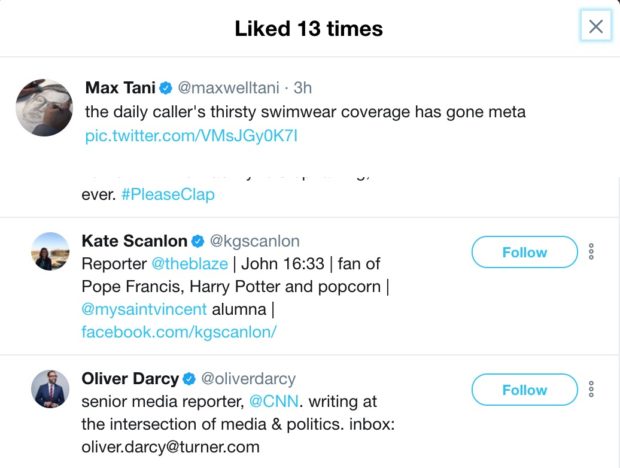 I don’t know Darcy or Foley, but my sources immediately briefed me on both. Now I had to weigh the options on how I would respond. Was war with CNN and HuffPost the best option? I’m still unsure, but what I am sure of is the fact that if Foley, Darcy or anybody who works at a news network has a problem with my work, I’m pretty easy to find.

If CNN wants to subtly applaud people jabbing me for supporting women, then so be it. If CNN was standing up for the rights of models nobody would believe it because their credibility is about as high as Ryan Kelly’s points-per-game. Don’t know you Ryan Kelly is? That’s my point exactly.

I will continue to do what I have always done best, and if people have a problem with my astute defenses of models, then they can feel free to kick this thing off to the next level. Before they do though, I’d highly caution them to read the tale of Arkansas coach Bret Bielema and his attempt to start a war with me.

In closing, here’s an awesome Sports Illustrated video for all you to enjoy.