The ‘Juice’ is loose.

And the call didn’t necessarily look like it was going to be a sure thing.

During the nearly two hour parole hearing Thursday, O.J. Simpson, who has been in a Nevada prison for armed robbery for the past nine years, did not appear contrite. He over-explained, laughed his ass off and didn’t attend alcohol rehabilitation classes, saying he doesn’t have a problem. He said he took a computer course, saying it would allow him to better communicate with his children and to perhaps write a blog someday.

The hearing was full of unplanned comedy. For instance, he claimed to live a “conflict-free” life. And at one point he looked like he was going to bum-rush the board when he talked about the property that was at the heart of the robbery.

Simpson will walk out of the slammer as early as October.

On Twitter, he spelled out his thoughts even more.

“OJ is nauseating,” he wrote.

Another legal analyst, Areva Martin sparred with Toobin and belted out, “The man’s daughter just testified that she loves her father!” To the surprise of CNN anchor Brooke Baldwin, she compared it to Megyn McCain‘s outpouring for her father, Sen. John McCain (R-Ariz.), who was just diagnosed with aggressive brain cancer.

Toobin continued, “OJ testified that he has led a ‘conflict free’ life, and he is a convicted wife-batterer (as well as, uh, a murderer).”

He even brought up his daughter, Arnelle, who provided an emotional testimony on her father’s behalf at the hearing. “Arnelle testified that OJ is ‘not a perfect man.’ Ya think?” Toobin asked sarcastically.

Another black CNNer, W. Kamau Bell, also stirred things up, writing on Twitter, “OK then… Black folks get ready for random white folks to start conversations w/ you like ‘CAN YOU BELIEVE THIS OJ THING?'”

Daily Mail‘s David Martosko was as incensed as Toobin on the O.J. outcome.

“O.J. Simpson just told his parole board that he’s lived ‘a conflict-free life.’ I can’t even,” he wrote on Twitter.

“There is NO REASON O.J. Simpson is still in jail for the Nevada robbery,” he began in a several tweet afternoon rant on the parole hearing. “That state has spent more money incarcerating him than necessary. Let’s just be honest: the judge who sentenced O.J. Simpson to 30 years in prison for 12 convictions was grandstanding. O.J. was sentenced to prison for 30 years in Nevada SOLELY because of his not guilty verdict in the death of Nicole Simpson, Ron Goldman. Only ONE other person who was with O.J. Simpson that night served two years. The others didn’t go to prison. And he didn’t have the gun!

“Welp, O.J., Bill Cosby and R. Kelly are all free to make a buddy comedy movie now,” said Robin Thede, who will host a late-night comedy show on BET in the fall.

Washington Examiner‘s Kyle Feldscher took Journo Twitter down a long and geeky road with this one: “Who’s going to start the movement to draft OJ to challenge Dean Heller?” he asked, referring to Nevada’s U.S. senator.

VICE‘s politics writer Eve Peyser was unrepentant about her irritation with the decision.

“Juice more like abuse-r who got away with killing two people brb deleting my account,” she wrote.

Daily Caller‘s sports writer David Hookstead had a sense of relief: “BREAKING: OJ Simpson has been granted parole. He can now go back to searching for the real killers of his ex-wife.”

Tamron Hall, formerly of NBC’s “TODAY” Show, remarked that the country has walked back to the 90s, when the trial of the century hit our TV’s with the death of Nicole Brown Simpson and her friend Ron Goldman.

“O.J. Simpson has the entire airport at a standstill. It’s like the 90’s no one is moving. I think some are willing to miss flights,” she wrote on Twitter.

The Daily Wire‘s EIC Ben Shapiro employed sarcasm: “I’m tempted to go with ‘Guy Who Definitely Didn’t Murder Two People, Like At All, Paroled In Nevada’ as my headline.”

“Yeah OJ Simpson got parole and that’s unfortunate BUT Hillary is still not president,” she tweeted. “We’re okay.”

A former advisor to ex-President Obama had a different take.

“Donald Trump is in the White House and O.J. Simpson is out of jail, I think someone is trying to tell us something,” wrote Dan Pfeiffer, veep of communications for GoFundMe. 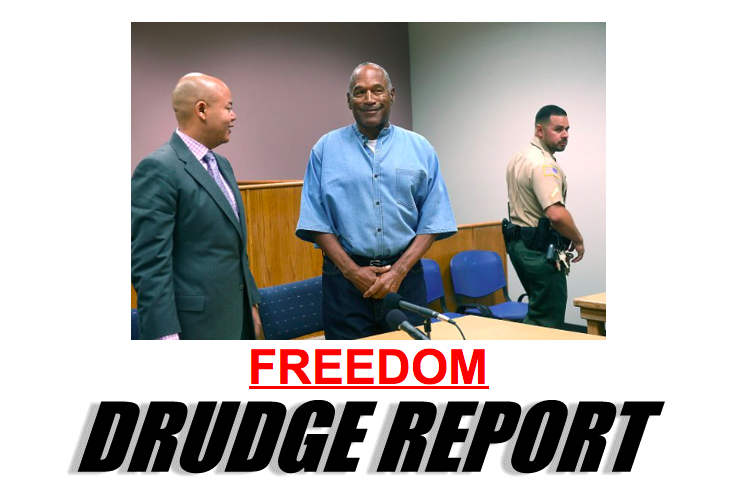