Anthony “The Mooch” Scaramucci has hit the ground running.

Among his first acts as the White House Communications Director is a demand for an apology from The Daily Beast for a cutting remark made by the site’s so-called “culture” writer.

The Mirror broke the story Friday of The Daily Beast‘s Ira Madison III calling Sanders a transvestite. Weirdly, Madison has since blocked me on Twitter for no other discernible reason besides being called out. Fox News host Tucker Carlson ran a segment about the comment on his program Monday night.

During the airing of the show, Scaramucci publicly called on  The Daily Beast to apologize. 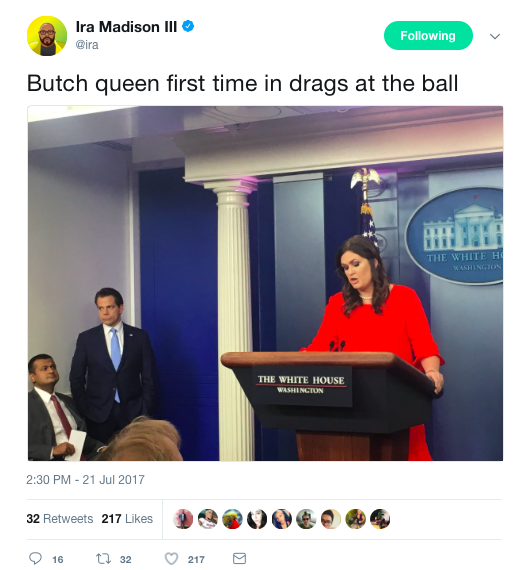 But Scaramucci may be waiting a long time as Madison isn’t remotely sorry.

When I asked him for a comment on Friday, he never replied. Instead, he went on Twitter to try to mock my story. He said simply, “I love my fans.”

Some of his followers insisted that I just don’t understand the “queer” community. Which, admittedly, I probably don’t.

But I do know that calling a straight married woman with three children a “butch queen in drag” isn’t a compliment.

Madison also went after Scaramucci for announcing over the weekend that he was going to delete some old tweets. “I serve @POTUS and that’s all that matters,” he wrote in his “full disclosure.”

Madison — again, The Daily Beast CULTURE writer — replied by suggesting that he and Scaramucci engaged in same-sex foreplay. “You can delete it all you want but I remember you asking to feed me honey-dipped gummi bears on a bearskin,” he wrote on Twitter.

He also wrote, “Forgive me, but Anthony Scaramucci looks like a sexy Dick Tracy villain.”

Madison slighted Sanders — in his words — for no other reason than to amuse his fans and gain Twitter followers.

But what he hasn’t deleted is this bizarre tweet. If only I had a better understanding of the “queer” community I could explain to you why this is something that would come from a liberal-leaning site like The Daily Beast. 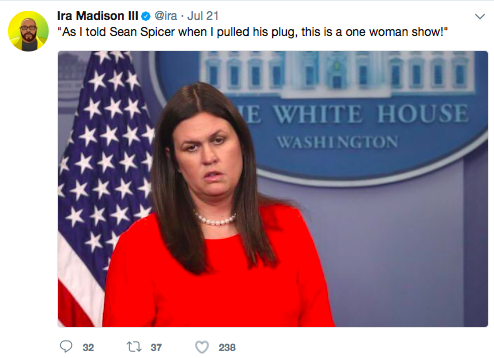 Madison has some 40K more followers than me and yet he felt some need to block me. What happened to his “love” for his fans? My only reply when he publicly ran my email request for comment was to thank him for running it and to implore him to answer my questions.

He chose not to.