The New York Times has quietly updated its Tuesday front page article on a “sweeping” global warming report some scientists fear “would be suppressed” by the Trump administration.

TheNYT reported they had obtained an unreleased draft copy of the National Climate Assessment (NCA), which is set for release in 2018. The paper claimed the NDA draft had “not yet been made public” and “concludes that Americans are feeling the effects of climate change right now.”

However, TheNYT published a “third order draft” of the NCA that’s been available online since January. The National Oceanic and Atmospheric Administration published the draft online in March.

The paper did not issue a formal correction by the time this article was published, and did not respond to The Daily Caller News Foundation’s inquiry into whether or not a correction would be issued.

“We clearly note in the story that this has been reviewed by NAS and was not a secret within the scientific community,” NYT reporter Lisa Friedman told TheDCNF about the inconsistencies. “The latest draft was not however public.”

The NYT then uploaded the actual never-before-seen “fifth order draft” of the National Climate Assessment (NCA) to its website but without issuing any correction or update to their original article.

A close look at Friedman’s article still shows the publicly available “third order draft” report as what was leaked. Clicking on the link, however, brings up the “fifth order report.” 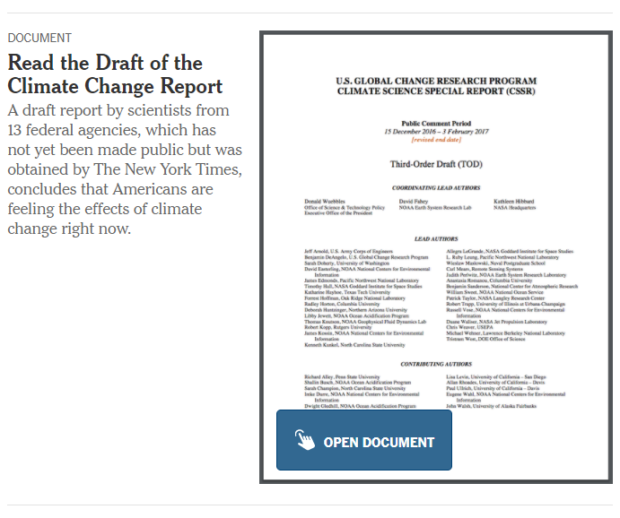 “It’s very disappointing, yet entirely predictable to learn The New York Times would write off a draft report without first verifying its contents with the White House or any of the federal agencies directly involved with climate and environmental policy,” a White house official told theDCNF.

“As others have pointed out – and The New York Times should have noticed – drafts of this report have been published and made widely available online months ago during the public comment period,” the official said. “The White House will withhold comment on any draft report before its scheduled release date.”

So after all that, TheNYT technically has a “leaked” report. But climate scientists who worked on the NCA have said there are few substantive differences between the two drafts. The final draft isn’t expected until next year.

If this is the 5th draft, it would be a “leak”–but main diff between 5th vs 3rd (public) draft are edits in response to public+NAS comments https://t.co/k0kxjfRgzI

The Washington Post added to Hayhoe’s remarks, reporting the “version at the White House is the fifth draft, but people familiar with both versions say there is no substantive difference.”