In the wake of Charlottesville, a tense Twitter spat erupted late Tuesday between a Politico reporter and a few journalists at the right-leaning The Federalist website.

After Politico Playbook Florida writer Marc Caputo went after The Federalist‘s Mollie Hemingway, coworker Gabriel Malor quickly went into high gear to defend her honor. In doing so, he drew the ire of Caputo, who called him an “asshole” in a rather crude way.

Here’s how Caputo insulted Hemingway: “Der Stürmer Mollie is on the same page as David Duke. …So many snowflakes upset that I called David Duke’s sock puppet what she was. But I have to go to bed. Goodnight. Try not to melt too badly.”

Caputo’s generalized view was not too offensive. “There’s too much celebration of violence over speech,” he wrote and retweeted. “Whether you love or hate Nazis, Antifa, both or neither, disavow political violence.”

And this: “The 2 sides fighting in Charlottesville aren’t ‘2 sides of the same coin. 1 side has Hitler on its face. …Obama refusing to say ‘radical Islamic terrorism’ isn’t equivalent To Trump inclusively blaming ‘many sides’ after a deadly neo-Nazi rally.”

He even defended President Trump, writing, “Tough to argue he’s a Nazi when he said he condemned them. Both side-ism isn’t the same as taking a side. Inadvisable? Yes. But different. …My viewpoint is simple. The president is not a Nazi. Calling him that cheapens the horror of Nazism. ”

Malor, who happens to be gay, was irked that Caputo called Hemingway pro-Nazi. 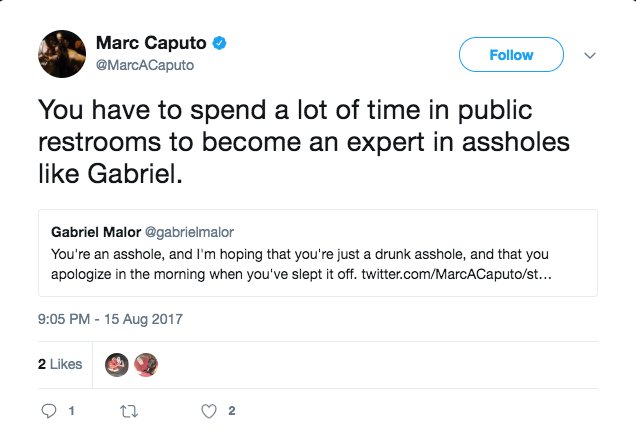 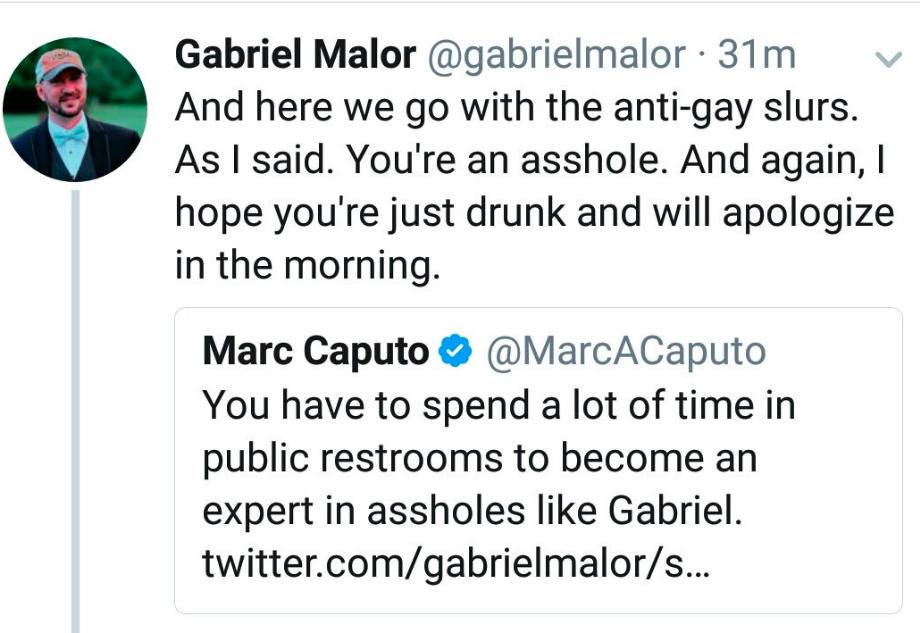 Caputo didn’t know Malor was gay. He wasn’t attempting an anti-gay slur as much as he was calling him out for his expertise in assholes.

Still, Caputo immediately realized he’d gone too far even for the esteemed medium of Twitter. He apologized and deleted his tweet. In what can only be described as miraculous, Malor instantly forgave him and called off the dogs who began calling for Caputo to be fired.

Malor told the world that anyone can screw up on Twitter:  “Accepted. Everyone has a bad day on Twitter.”

The whole ludicrous ordeal kind of became: whose the asshole now?

But it was also — dare I say — touching.

In case you slept through this one, here’s more of what went down last night.

Caputo, who appeared to be up much of the night, wrote, “Well, I was over the top. And this is karma: I said something outrageous, someone got outraged. Rage followed. Not a good pattern.”

Defending himself (a little) he added, “Straight people have sex in public restrooms as well.”

Malor had advice: “It would be a positive step to apply this reasoning to your tweet about Mollie Hemingway.”

But Caputo wouldn’t relent: “I’ve had experience with Mollie’s deceptiveness. So I can’t clear that bar.”

Malor replied, “Mollie is a dear friend of mine, and I know that saying she’s on the same page as the KKK is a vile and false thing to say.”

Caputo refused to ease up on Hemingway, but he didn’t cower from his mistake in judgment.

“Well, he didn’t know that I didn’t know,” he wrote referring to Malor not knowing that he did not know his sexual preference. “It was understandable. I brought it on myself and I’ll apologize for my errors.It’s called owning up to your errors.”

Speaking directly to Malor, he offered a full-throated apology: “My intention was to be a snarky jerk back, not a bigot. I’ll happily trade insults, but this isnt one I stand by now that I know the facts. And I will go a step further: I earned being called an asshole by you. Lesson learned.”

Before deleting the tweet — which was screengrabbed — Caputo sought counsel from Malor.

“I’ll leave this in Gabriel’s hands. I was unaware of this as an issue. And if it’s being misconstrued, I’ll delete. Your call, @gabrielmalor,” he wrote.

“I am not responsible for your tweets,” Malor shot back. “Use your better judgment.”

But that wasn’t enough for Caputo, who seemed to put his fate in Malor’s gentle hands.

“Gabriel, I ask again: Your feelings delete or no?” he asked.

Malor replied, “I am not asking you to delete anything. I’ve said dumb things too in the heat of the moment.”

He also took a moment to slam The Federalist‘s co-founder Sean Davis, saying, “Sean needs a glass of warm milk and his lactose intolerance pills.”

Malor replied, “I don’t know what victim card you think I’m playing, but I admit I’m curious. What does that even mean?”

Caputo broke it down for him: “Let’s first address this issue: You suggested this was designed as an anti-gay slur. I don’t know you, but others are saying it. So if you feel it was I will promptly delete it.”

Caputo obviously deleted the tweet himself, but not without people writing Twitter to issue formal complaints about it. “The rats of Twitter, scurry for their cheese,” he observed.

Caputo wrote, “Well, this was dumb and ignorant. It was ignorant because I didn’t know. I am sorry. I’m deleting as a result.”

But perhaps the most profound tweet of all was this one:

“For the first time, Twitter is depressing me,” Caputo wrote. “I don’t know if I want to keep taking this red pill.”