A laptop that Rep. Debbie Wasserman Schultz has frantically fought to keep prosecutors from examining may have been planted for police to find by her since-indicted staffer, Imran Awan, along with a letter to the U.S. Attorney.

U.S. Capitol Police found the laptop after midnight April 6, 2017, in a tiny room that formerly served as a phone booth in the Rayburn House Office Building, according to a Capitol Police report reviewed by The Daily Caller News Foundation’s Investigative Group. Alongside the laptop were a Pakistani ID card, copies of Awan’s driver’s license and congressional ID badge, and letters to the U.S. attorney. Police also found notes in a composition notebook marked “attorney-client privilege.”

The laptop had the username “RepDWS,” even though the Florida Democrat and former Democratic National Committee chairman previously said it was Awan’s computer and that she had never even seen it. 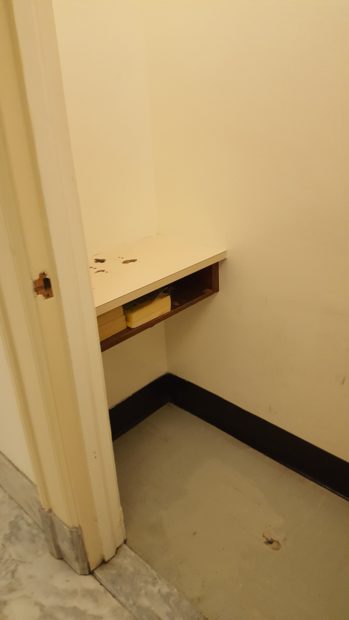 Awan was banned Feb. 2, 2017, from the congressional computer network because he is a suspect in a cybersecurity investigation, but he still had access to House facilities because Wasserman Schultz continued to employ him.

The laptop was found on the second floor of the Rayburn building — a place Awan would have had no reason to go because Wasserman Schultz’s office is in the Longworth building and the other members who employed him had fired him.

Wasserman Schultz used a televised May 18, 2017 congressional hearing on the Capitol Police budget to threaten “consequences” if Chief Matthew Verderosa did not give her the laptop. “If a member loses equipment,” it should be given back, she said.

She changed her story two months later, claiming it was Awan’s laptop — bought with taxpayer funds from her office — and she had never seen it. She said she only sought to protect Awan’s rights. “This was not my laptop,” she said August 3. “I have never seen that laptop. I don’t know what’s on the laptop.”

Awan, his wife, Hina Alvi, and two of his Pakistani-born brothers are at the center of a joint FBI-Capitol Police cybersecurity criminal investigation of their IT work for dozens of Democratic House members.

Awan was arrested by the FBI at Dulles International Airport July 25, 2017, while trying to board a flight to his native Pakistan and then indicted on four counts of bank fraud in connection with his wire transfer of nearly $300,000 to Pakistan. The bank fraud charges are tangential to the cybersecurity probe.

The circumstances of the laptop’s appearance described in the police report suggest Wasserman Schultz was trying to keep the police from reviewing a laptop that Awan himself may have wanted them to find. The former phone booth room where police found the items is small, and there was no obvious reason to enter it.

Leaving important items there accidentally would seem extremely unlikely, according to Rep. Louie Gohmert, a Texas Republican, former prosecutor, and member of the House Judiciary Committee.

“Imran Awan is a calculating person who made great efforts to cover his tracks, both electronically and physically,” Gohmert told TheDCNF. “Placing that laptop with his personal documents, which may well incriminate him, those he worked for, or both, in the dead of night in a House office building, was a deliberate act by a cunning suspect, and it needs to be investigated.”

Even though the laptop was allegedly used only by an IT aide who worked for numerous members, Wasserman Schultz has hired an outside counsel, William Pittard, to argue that the laptop not be examined. Pittard argued that the speech and debate clause — which only protects a member’s information directly related to legislative duties — should prevent prosecutors from examining the laptop’s contents, TheDCNF has learned. Pittard did not respond to requests for comment.

The most recent notable example of a member hiring an outside attorney to argue a more aggressive interpretation is former Louisiana Rep. William Jefferson, who was convicted Aug. 4, 2009 of “using his office to try to enrich himself and relatives through a web of bribes and payoffs involving business ventures in Africa.” Investigators found $100,000 in cash in his freezer.

The collection of documents found in Rayburn tied the laptop to Awan and ensured that police would keep the computer. The reporting officer wrote that when he saw Awan’s name, he recalled guarding an interrogation of him a few months earlier. The “attorney client privilege” notation also prevented police from immediately reviewing some of the papers.

Nonetheless, the officer opened the MacBook and found that its login screen did not have Awan’s username, but rather “RepDWS.”

On 4/6/2017 at 0021 hours, with the building closed to the public, AOC informed USCP Rayburn offices of an unattended bag in the phone booth on the 2nd floor. The officer received the open-contents visible bag and prepared a found property report. While reviewing the inventory of the bag contents, the officer found

#1 a Pakistani ID card with the name Mohommed Ashraf Awan
#2 a copy – not original – of a drivers license with name Imran Awan
#3 a copy (front and back) of his congressional ID
#4 an Apple laptop with the homescreen initials ‘RepDWS’
#5 composition notebooks with notes handwritten saying ‘attorney client privilege’ and possibly discussing case details below
#6 loose letters addressed to US Attorney of DC discussing the apparent owner of the bag being investigated.

Approximately 3-4 months ago officer was requested by SAA as police presence of 4 individuals being interviewed, including the bag owner. It is unknown to the officer whether he is still employed.