In the infinite wisdom of “Project Runway’s” Heidi Klum, “one day you’re in, and the next day … you’re out,” she says, punching the final word.

This is what went down last week as I was reporting a story about the romantic relationship between 10-day White House Communications Director Anthony Scaramucci and Fox News’ Kimberly Guilfoyle, the leggy brunette former attorney who hosts “The Five.”

The tabloids have been tracking their relationship status since July.

They’d been spotted together on too many occasions to count — alone at dinners around Manhattan, at Scaramucci’s haunt, Hunt & Fish Club, as well as at the White House in more of a group setting with President Trump.

Last week #Scarfoyle took their budding relationship to the next level and jaunted to Rome for a hoity toity fundraiser that lured in people like actress Sharon Stone, Aerosmith’s Steven Tyler and actress Bo Derek. It’s called Celebrity Fight Night, and it raises money for The Andrea Bocelli Foundation and the Muhammad Ali Parkinson Center.

There they were, for all the world to see, standing next to each other: The Mooch and Guilfoyle angelically styled in all white like all the other guests. Scaramucci looked like a frat boy — no tie, white Bermuda shorts, a white button-down and a dark blazer. Guilfoyle was all dolled up in a tight white dress. They were also caught on video sitting together at a fancy table draped in white cloth with others. They posed for cozy pictures that turned up in Getty Images. 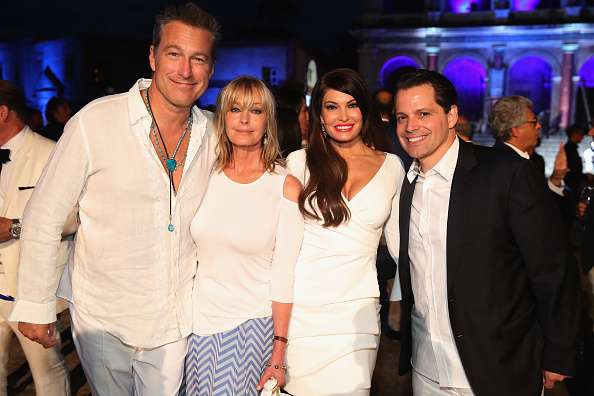 Two days later, they were at it again, except now they were two days smarter.

As NYP‘s “Page Six” described it, the couple who has previously claimed they are not together were spotted lurking in the corner of a US Weekly fashion party at the Jane Ballroom in Manhattan. This time as the flashbulbs sprayed bursts of light on them and the cameras went click click click, they refused to appear together in photographs.

And then I discovered something else: The Mooch had been parking his Bentley outside Guilfoyle’s apartment building. I had a picture. I had a license plate that I compare to a picture of his car that appeared in the Daily Mail. And I had a lot of unique details. He’d been spotted slipping in and out of  her building in the morning and at night. On at least one night, he was spotted walking with her on the block near her building. Did I strike gold in terms of nailing down some new details of their so-called just friends relationship? Well, yeah. I had a source who lives in Guilfoyle’s building and can’t stand Scaramucci but loves Guilfoyle. Did I report they were having sex? No. I don’t have any actual proof of that and therefore can’t write it. For all I know, he really is a pal who is sleeping on her couch. (Do I think that? Of course not.) Was I looking to hurt them? No. Was I trying to take them to a gas chamber and murder them? A million times, no.

But don’t tell that to The Mooch’s publicist Howard Bragman, who runs Fifteen Minutes, an interesting name for a public relations firm. I didn’t even know Scaramucci had a publicist since he’s been all out there on Twitter with his new media venture The Scaramucci Post, which may or may not be a new publication. So far, The Mooch is being all cryptic about it. For the time being, it’s little more than an obscure self-obsessed feed that focuses on Twitter polls on which journalist or political figure the feed should follow.

Up until now, journalists and the general public has been fairly obsessed right back.

Scaramucci himself emailed me in July when I asked him about something I heard from well-placed sources — which was that Scaramucci has the hots for Guilfoyle and his then-boss President Trump also thinks she’s attractive.

That same day The Mooch learned he was out of a job. That same month he learned he had a new baby boy by his wife, Deirdre Ball, who filed for divorce when she was nine months pregnant. Scaramucci has reportedly since questioned the paternity of the baby and does not think the child is his.

As I wrote my story about The Mooch having sleepovers at Guilfoyle’s pad, I did what reporters do in the most basic form of reporting: I wrote each party for comment. I texted Guilfoyle, and I emailed Scaramucci. I had texted Guilfoyle before with no success. But I had to write her again — even if she chose not to reply. In fact, I assumed she would not respond. But here’s what I wrote:

“Kimberly….hi. Sorry to bother again. Writing a story about sleepovers with The Mooch. Have pictures of his car outside your place. Honestly…I am not trying to be a pain in your ass at all. Have heard great things about you. Just doing my job. If you have a comment please let me know. – Betsy”

I also sent Scaramucci an email.

I have sources spotting you in Kimberly’s building and your car parked outside.
Essentially proof that you’ve been spending the night at her place for awhile.

I have a picture of your car outside her building. And yes, I know you
were reportedly trying to buy a place there, but this is at night —
it’s dark.

“What is your cell phone number?” he asked.

I sent it to him.

Moments later, I received the following letter from Bragman that sounded like something out of a “Godfather” film.

“Please refrain from calling, texting or reaching out to my client, Anthony Scaramucci. I am his pr rep and things run through me. Although she’s not my client, I would ask you to refrain from contacting Ms. Guilfoyle also. And telling them, ‘You’re just doing your job’ didn’t work so well for Eichmann; it merely reiterates your lack of personal morality and responsibility for participating in gutter journalism.”

A media insider replied: “You didn’t say they were banging. Just that they had sleepovers. …They’re accusing you of being a stalker and bottom feeder. Which is very different than wrong.”

A trusted media friend reacted like this when I read it aloud: “He’s comparing you to a Nazi?”

According to Otto Adolf Eichmann’s Wikipedia profile, he was “a German Nazi SS-Obersturmbannführer and one of the major organizers of the Holocaust.”

With a name like “Rothstein,” how could I have not helped organize the Holocaust?

This might be the worst thing anyone has said to me since CNN’s Jake Tapper accused me of “reveling in casual anti-Semitism” for writing that dancing midgets in bris bibs turned up to Milo Yiannopoulos‘s Dangerous book party. They wore Ben Shapiro name tags to mock the editor in chief of The Daily Wire. Tapper was adamant that my simple description was anti-Semitic because I put it under the umbrella of “party highlights.” That was July.

So let me get this straight. I am supposed to stop contacting Scaramucci, who just wrote to ask for my phone number? Also: I am to supposed to refrain from seeking comment from Guilfoyle?

A source suggested I write back to Bragman — yes, The Mooch has a publicist named Brag-Man — and respond like this:

“Howard, Please refrain from calling, texting or reaching out to me. I prefer to deal with newsmakers themselves, and don’t feel like giving you an excuse to bill hours. Things run through me. Best, Betsy.”

Every journalist knows the hurricane strength wrath that follows when a reporter does not seek comment.

But fine, per Bragman, I’ve got my marching orders.