Recently a friend asked me for a ’03 Springfield opinion. He wanted to get a good shooter on which to mount a scope for some of the vintage sniper rifle matches being held around the country. His primary worry was the serial number warning. This pertains to the admonition about not shooting a low-numbered M1903 due to possibility of actions shattering. The common wisdom says a Springfield Armory ’03 above 800,000 is safe, as are Rock Island Arsenal Model ’03’s above 285,000.

Don’t bah-humbug this safety warning. I personally know one shooter hospitalized when his low-number Springfield shattered on firing. So, my response to my friend was “Just get a Remington.” This confused him because he said, “You don’t understand. I want an ’03, not an ’03-A3.”

I replied, “No, you don’t understand. Remington made a boatload of ’03’s before remodeling to the ’03-A3.” My advice was to get a Remington M1903, preferably one already messed with so its value wouldn’t be ruined. Then have it drilled and tapped for whatever scope mounts pleased him. Plus, the Remington would most likely have a newer barrel than an earlier ’03 made at either of the two government facilities.

By early 1941 the US War Department realized America’s involvement in World War II was inevitable and, as usual, weapons of all sorts were in short supply. Although the M1 had been adopted in 1936, there were nowhere near enough of them yet to satisfy all requirements. Therefore the government contracted with Remington Arms Company to begin making the M1903 once more, with the stipulation government-owned—but unused—machinery from Springfield and Rock Island be utilized.

Only days before the Japanese attack on Pearl Harbor on December 7, 1941, Remington began delivering these new ’03’s. They were identical in form and function to the government-made M1903’s. They had the Model 1905 open rear sight, finely adjustable for windage and elevation. Barrels were 24 inches long and marked with an “RA” and month and year of manufacture behind the front sight. Stocks were walnut with a straight grip, and all stock furniture was milled steel. If still in original condition, these early Remingtons are easily identified by the stocks’ finger grooves under the rear sight. All metal parts were Parkerized.

Remington was tasked with making hundreds of thousands of ’03’s, with peak production expected to result in 1,000 rifles completed per day. Almost immediately, however, the company began having problems meeting the quota. By the beginning of 1942 they asked for—and received—permission to make some changes. Some minor parts were eliminated or altered, but the most visible alteration was no grasping grooves were put into the stocks. This resulted in the name Model 1903 (Modified). According to Lt. Col William S. Brophy’s The Springfield 1903 Rifles, Remington produced about 350,000 M1903 and M1903 (Modified) rifles by late spring of 1942.

Duke fires his Remington M1903-A3 at his home range. He much prefers the peep sight on the ’A3.

The M1903 played an important part in the first 6 months of WWII and Remington supplied 1/3 million of them. Remingtons were marked in three ways.

Third was Model 03-A3 upside down on the left side of the front receiver ring.

Remington engineers continued to devise methods of making the rifles more quickly and efficiently. One method was to make as many steel parts as possible by stamping instead of milling. Brophy’s book says their proposed changes reduced the amount of steel used in making a single rifle by more than 6 pounds! And labor time was reduced by 50 percent. On May 21, 1942, the government OK’d the proposed changes and allowed Remington to rename their alteration the “Model 1903-A3.” However, the front receiver rings were only marked “03-A3.”

The most significant departure from 1903 to 1903-A3 was in the rear sight. Instead of the intricately adjustable M1905 open sight, Remington’s new one was a peep on a ramp set atop the rear receiver ring. It was stamped steel with a sliding aperture graduated to a more realistic 800 yards. Windage could be adjusted with a knob laterally moving the entire rear sight. Each click was about 4 MOA, about 4 inches at 100 yards.

Then there’s the matter of stock design. Heretofore, M1903’s made by the government facilities could have two shapes of stock. The first and most common were those with a straight grip. About 1929—mostly at the behest of military target shooters—a pistol grip stock was developed. It was then named the “C-stock” and rifles fitted with them became the Model 1903-A1, although none were so stamped. Afterward, straight-grip stocks were named “S-stocks.” All Remington Model 1903 and Model 1903 (Modified) rifles were originally fitted with S-stocks.

About the time of Model 1903-A3 acceptance, Remington came into several hundred thousand wood blanks without enough meat on them to become full-fledged C-stocks. Otherwise they were perfectly serviceable. The government granted permission to use them anyway with an abbreviated pistol grip. These became known as “Scant-C” stocks. With so much repairing during the war and postwar refurbishing, any of the three stock designs might be found on any 1903/1903-A3 by any manufacturer. (In fact, my current Model 1903 Remington has a Scant-C.)

Another change the government approved in regard to the Remington ’03-A3 had to do with the number of rifling grooves. Normally there were 4 with a 1:10 twist. Remington experimented with some 2-groove barrels and found they shot acceptably—and sometimes better than 4-grooved ones. So if you see a Remington 1903-A3 with either a 2- or 4-groove barrel or with straight grip or Scant-C stock, it is still correct to the era.

And this brings us to the M1903-A4, a designation Remington never actually stamped on a rifle. Whereas the Soviet Union entered WWII with about 60,000 trained snipers, the US Army had none and the US Marine Corps had a few. At the beginning of 1943 the need for sniper rifles was recognized, so the Ordnance Department instructed Remington to make some. About 28,000 Model 1903-A3’s were chosen—essentially at random. Aside from mounting a Weaver 2.5X Model 330C scope in Redfield mounts, the only alterations needed were to bend the bolt handles for scope clearance and to leave off the front sight.

One move (which just about totally prevented later counterfeiting) of 03-A4’s was moving the marking from the top of the receiver ring to the left side—and doing it upside down to boot! Regardless, the stamp was left as 03-A3. These rifles were given full pistol-grip C-stocks.

Some shooters today refer to the Model 1903-A3 as the Model 1903’s “poor relation.” Indeed, they were not fitted and finished as well as earlier Springfield and Rock Island Arsenal ’03’s—or even Remington’s early specimens for that matter. Still, they are fine rifles and were used around the world during WWII. I’ve discovered photos of them being used in locations as disparate as Burma and Italy.

Due the late development of M1 Garand grenade launchers, many ’03’s and ’03-A3’s were issued per squad or platoon in the European Theater of Operations to serve this purpose. One book I read about paratroopers dropping in Normandy on D-Day related how many of those Springfield-armed troopers discarded them in favor of semi-auto M1’s gathered from other fallen soldiers.

Also I’d like to mention something about ammunition. Whereas you must be careful with modern factory loads in M1 Garands lest their high pressures bend operating rods, you don’t have to worry with a bolt action. Any load with a 150-grain bullet at 2,700 to 2,800 fps essentially duplicates military ballistics for M2 Ball loads. That can be accomplished with 48 grains of Varget, H4895, IMR4895 or IMR4064. Other fine powders for Remington-Springfields are H4350 and IMR4350 in a charge weight of 55.0 grains. Over any of those powder charges, 155-grain match grade bullets by Hornady, Berger, Nosler or Sierra serve well. Those are what I use in vintage military rifle matches.

Other 1903’s and 1903-A3’s are in my collection. They were produced by Springfield Armory and Smith-Corona respectively. But the ones I shoot most often are my Remington-Springfields.

In Duke’s shooting over the years with an array of Remingtons and Springfields, he has come to favor 150- to 155-grain bullets.

Better Yet – Check out subscription options and get GUNS Magazine delivered to your door. 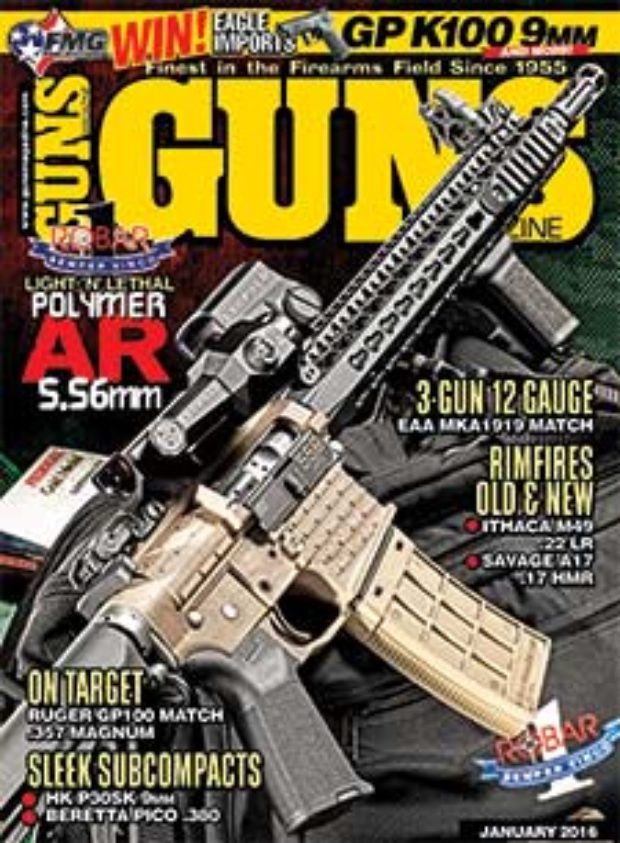