An Arkansas Razorbacks fan has created a Go Fund Me to buy out current head coach Bret Bielema’s contract.

Austin Johnson created the Go Fund Me after the Hogs lost in entertaining fashion to the Texas A&M Aggies Saturday afternoon. The goal right now is $15.5 million, which is what Bielema’s current buy out is pegged at.

“It’s safe to say that Bret’s time here should be over, however, Jeff Long has made this difficult with the lucrative 15.5 mil buyout, let’s end this misery ourselves,” Johnson wrote as the Go Fund Me’s description. 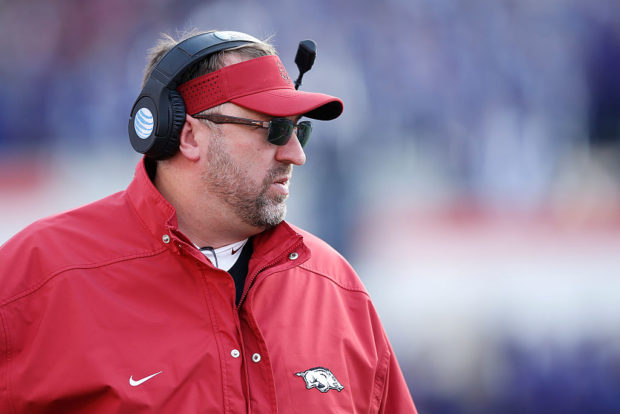 MEMPHIS, TN – JANUARY 2: Head coach Bret Bielema of the Arkansas Razorbacks looks on against the Kansas State Wildcats in the first half of the AutoZone Liberty Bowl at Liberty Bowl Memorial Stadium on January 2, 2016 in Memphis, Tennessee. (Photo by Joe Robbins/Getty Images)

I doubt this guy’s going to raise $15.5 million dollars, but it certainly is a lot of fun to watch fans of the Razorbacks finally turn on Bielema. It’s about time.