In the wake of the high-profile firing of James Damore from Google over his memo of “Ideological Echo Chambers,” the CEO of tech company Node Package Manager (NPM) has signaled his virtue calling for fewer “white dudes” in tech.

In a series of tweets about an upcoming tech conference called Assert(js), NPM chief executive Isaac Schlueter called on “people who are not white dudes” to submit talks because “I want there to be good content at this conference, period.”

NPM is the largest package manager for JavaScript in the world, receiving a total of $10.6m in equity funding. It is a critical piece of software that developers use to install, manage, and publish their code.

Schlueter, who is a white man in tech, submitted his own speaking proposal to the conference, exempted himself from his virtue signal to state: “If the speaker proposals are all/mostly from white dudes, the quality of content suffers due to a limited pool. This is basic math.”

The self-described social justice warrior went on to state that “reverse discrimination,” which is to say discrimination against white men, does not exist—and that the demographics matter.

He wrote: “EVEN IF ‘reverse discrimination’ were a real thing (it isn’t), and EVEN IF the demographics of speakers ‘doesn’t matter (it does)’ If ALL ANYONE CARES about is the merit of the content of the talks (it isn’t), and you literally CANNOT see gender/race/etc. (you can), one would STILL expect to get a better quality of resulting content from a broader and more demographically diverse pool.”

Schlueter contradicts himself in a later tweet to suggest a blind review of all talks based on quality, so speakers are chosen not on their sex or ethnicity, but on the quality of their proposals.

He also took to lecturing responders with rationale about “reverse racism,” systemic privilege and oppression.

The content of his argument hinges upon the unsubstantiated belief that every white man thinks alike, and that women and minorities will offer more to say at the tech conference. When questioned about the “basic math,” Schlueter offered an awkward mathematical example, in which he claims that half of the good proposals from white people are going to be split down the middle on gender lines.

He reaches the conclusion that a group made entirely of white people isn’t going to produce the best results because it isn’t diverse. Schlueter claims that the reason women and non-white people do not submit their papers because of “social pressure” without any citation for his argument, adding that their “safety” at a tech conference is “less guaranteed.”

As the CEO of one of JavaScript’s leading companies, Schlueter also took it upon himself to dictate who and what the “node” community is, and excluded Reddit’s r/node—calling it a “place for GamerGate/KIA/TRP to launch attacks on the @nodejs community” because its members were critical of his professional conduct. 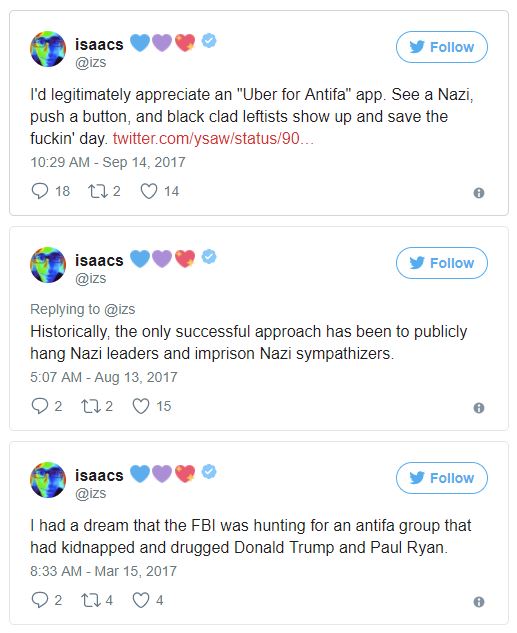 Beyond his attempts to exclude other white people from tech, Schlueter has expressed his support for the violent left-wing movement Antifa on Twitter throughout the year. “I had a dream that the FBI was hunting for an antifa group that had kidnapped and drugged Donald Trump and Paul Ryan,” he wrote.