The Army officer who outed himself as a radical Marxist had been reported back in 2015 for publishing inappropriate and outright anti-American views online, according to a scathing report obtained by The Daily Caller.

West Point’s Public Affairs office quickly released a statement last week condemning Rapone’s actions, saying that they “in no way reflect the values of the U.S. Military Academy or the U.S. Army… Second Lieutenant Rapone’s chain of command is aware of his actions and is looking into the matter.”

The statement leaves readers with the idea that Rapone’s chain of command (and indeed the academy at large) was unaware of his radicalism and frequent Uniform Code of Military Justice violations. It turns out a senior officer reported Rapone to his chain of command nearly two years ago.

In a social media post that concerned retired Army Lt. Col. Robert Heffington, an Academy history professor at the time, Rapone wrote, “F*ck this country and its false freedom.”

In November 2015, after being removed from his Ranger battalion for violating standards, Rapone was a cadet in his final year at the academy. According to the report obtained by TheDC, after the latest in a series of incidents involving Rapone’s penchant for insubordination, Heffington became aware of Rapone’s radical leftist activity on social media and notified the cadet’s chain of command.

“From his various online rantings and posts, it appears that DCT Rapone is an avowed Marxist, which is completely out of line with the values of this nation and its Army,” Heffington said in a sworn statement. “Moreover, CDT Rapone’s posts indicate that he hates West Point, the U.S. Army, and indeed this country. One post dated 16 November 2015 states, ‘F*ck this country and its false freedom.’ He also … even implicitly justifies the actions of ISIS and blames the United States for terrorist attacks.”

Heffington concluded in his report, “I cannot reconcile the image of a first class cadet at West Point with the things he has posted online for the world to see. To me, these are red flags that cannot be ignored, and I fail to see how this individual can possibly graduate and become a commissioned officer in six months.” 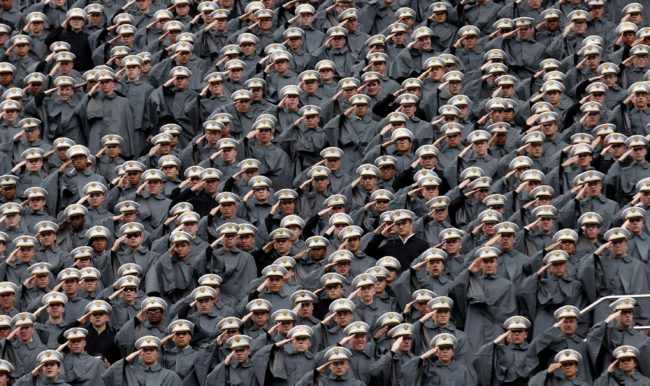 The same day he wrote this report, Heffington contacted then-cadet Rapone’s training, advising, and counseling officer. The officer was disgusted, but not shocked, Heffington said.

“Unfortunately, I’m not surprised,” the officer said, according to Heffington.

This reaction is merely one of many indications that Rapone’s activism, radical views and immature opposition to authority were well known around the academy — and especially obvious to his chain of command. According to a former head of the Military History and International History divisions at the U.S. Military Academy, Rapone’s plebe year history professor also reported him to the chain of command.

Heffington characterized Rapone as routinely “going out of his way to flout authority.”

In one incident described in the report, the lieutenant colonel confronted Rapone when he heard yelling in a professor’s office. The cadet reportedly answered in a “loud and extremely disrespectful tone,” “Sir, you don’t have the right to use my honor against me!”

Rapone — a supposedly brilliant cadet, according to his mentor, Professor Rasheed Hosein of the History Department — responded with a childish tantrum: “Sir, this isn’t fair! You’re just putting me on blast!”

Heffington notes in his report that he told Rapone he did not understand what “putting someone on blast” meant, a rare comedic moment in an otherwise infuriating account. Rapone’s response, that he felt “singled out,” is puzzling when one considers the lengths to which the cadet went in order to cast himself as a righteous nonconformist.

In fact, Rapone had singled himself out during his confrontation with Heffington, being in civilian clothes in an academic building (a violation of regulations), by refusing to stand when a superior officer entered the room (a breach of military protocol), and by refusing to answer a superior officer’s direct question regarding who had been yelling (refusal to obey a lawful order).

Most incredibly, Rapone had the gall to respond with righteous indignation.

“He seemed to look at me with nothing but contempt and hatred, no matter what I said or how I tried to reason with him to show him how wrong he was,” Heffington said in his 2015 report.

Multiple other sources contend that Rapone willfully put his anti-capitalist, anti-military and anti-American views on display for the world to see, both in person and over social media. Two recent academy graduates, when reached for comment, suggested that Rapone’s reputation at the academy preceded him. Although they did not personally know Rapone, they stated that they were aware of his radical leftist views and his rebellious reputation long before his activism hit the news this September.

On social media, Rapone’s account (including his Instagram, with the handle “punkproletarian”) abound with praise of communist leaders, interspersed with scathing criticism of his nation, its military and even his chain of command. Rapone’s rantings unequivocally condemn what he refers to as the military’s “brutally hierarchical rank structure,” and he deems Defense Secretary Mattis “the most vile f*ck in the current administration.”

This 2015 report unambiguously states that Rapone’s vehement anti-American views and his obsessive insubordination made him a dangerous liability to this nation’s military. Its author urged his chain of command not to allow then-cadet Rapone to commission as an officer. And, according to Heffington, every officer he spoke to agreed with this conclusion.

In essence, everything that was reported over the previous week should have been old news to anyone in Rapone’s chain of command, had they been paying attention.

In his Monday Townhall article, “Our Broken Military Can’t Even Manage to Toss Out Traitors,” Army Col. Kurt Schlichter declared Rapone’s apparently tolerated communist activism “the pinnacle of the military’s moral bankruptcy.” Schlichter argues that Rapone needs to be ousted. But he also professes that the real problem here is far larger than the Marxist officer:

“The real story isn’t this one loser. It’s not even the other losers who knew what he was and said and did nothing,” Schlichter wrote in Townhall. “It’s the chain of command. We need to know exactly what the faculty and staff at West Point knew about Comrade Cadet Rapone’s treachery. If they did know –– and I bet we will find out that he was counseled in writing about it — every officer from his first line supervisor to the USMA Superintendent must be relieved and reprimanded.”

“Someone must have known about this sort of behavior pattern well before, and they are negligent in the conduct of their job,” Maginnis told One News Now. “He should have been discharged from the military academy long ago.”