Activists in Colorado staged a “die-in” demonstration Tuesday protesting the fossil fuel industry a day after a sniper shot and killed several people at an outdoor concert in Las Vegas.

Members of East Boulder County United (EBCU) staged a protest at a city hall meeting opposing policies that promote fracking. Activists, many of whom believe fracking causes citizens to die, stormed the meeting while holding mock tombstones with the words “Killed by Gas” written on them.

“Your citizens are lying on the floor of this hearing room to show you first-hand, the death and destruction that is coming to Boulder County from fracking,” according to an Oct. 3 post on the group’s Facebook profile. EBCU video taped the demonstration as well.

“We are staging a peaceful die-in to illustrate the lethality and the seriousness of what you are allowing to happen,” the group noted. Activists with the group oppose hydraulic fracking, which is a method gas production studies show helps dramatically reduce greenhouse gas emissions. 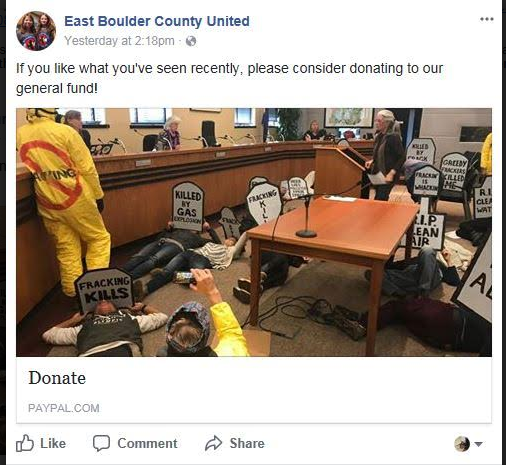 EBCU used an image of the protesters lying on the ground at the Boulder County Commissioners (BCC) meeting, while holding grave markers, to promote and solicit donations to their efforts with the caption: “If you like what you’ve seen recently, please consider donating to our general fund.”

One of the group’s members implored the BCC during the meeting to pass a “Climate Bill of Rights,” which the EBCU’s members believe would protect Boulder, Colo., citizens from the supposed dangers of fracking. A similar bill in Layfette County, Colo., sought to prohibit police officers from arresting or detaining those attempting to use “nonviolent direct action” to enforce the bill’s tenants.

The Layfette version was a reaction to an amendment passed in November of 2016 making it more difficult for Colorado to ban fracking. The measure requires a proposed amendment to garner voter signatures in all 35 state Senate districts before it can be passed into law; more than 50 percent of voters must approve future amendments.

EBCU’s die-in protest came less than two days after a Stephen Paddock killed 58 people during a Las Vegas music concert – the horrific shooting is considered one of the deadliest mass shootings in American history. The group’s ill-timed demonstration comes on the heels of similarly awkward moments for the anti-fracking activists in Colorado.

Members of the Boulder County Protectors (BCP), for instance, protested outside the home of a government official in September they believed to be a fossil fuel supporter, not realizing the official had long since moved to a different residence. BCP joined BCC during Tuesday’s die-in protest.

They demonstrated outside a home in Boulder where they thought Boulder County Commissioner Elise Jones lived. Jones hasn’t lived in the house for nearly five years, much to BCP’s chagrin. The day of the rally about 50 community members had marched “on a home of politically compromised Boulder County commissioner Elise Jones asking her to resign,” the group said in a news release.

EBCU has not responded to The Daily Caller News Foundation’s request for comment for this story.