The left-wing Bernie Sanders supporter who opened fire on a crowd of Republican congressmen in June intentionally committed an “act of terrorism” that was “fueled by rage against Republican legislators,” according to a new report released by the state’s attorney on Friday.

WATCH A PROFILE OF JAMES HODGKINSON:

The suspect, 66-year-old James T. Hodgkinson, picked the baseball field in Alexandria, Virginia as his target months in advance of the shooting, according to the report. Hodgkinson was also seen watching the Republicans practice for the congressional baseball game the day before the shooting, where he shot and wounded four people, including Louisiana Republican Rep. Steve Scalise.

“The evidence in this case establishes beyond a reasonable doubt that the suspect, fueled by rage against Republican legislators, decided to commit an act of terrorism as that term is defined by the Code of Virginia. See Va. Code §18.46.4,” Bryan L. Porter wrote in the report.

The Daily Caller was the first to report last June that Hodgkinson had a list of Republican congressmen in his pocket at the time of the shooting, a fact the FBI later confirmed.

The state report contradicts the conclusion put forth by the FBI, which treated the mass assassination attempt as “assault” rather than terrorism.

The heroic actions of the two members of Scalise’s security detail, the report states, “indisputably prevented the suspect from completing his planned attack and, therefore, prevented innumerable deaths and serious injuries.”

The report also indicates that Hodgkinson planned out the mass assassination attempt months in advance.

“Media files recovered from the suspect’s phone show video of Simpson Field that was recorded in April 2017. After the incident, several witnesses came forward and reported seeing the suspect walking around Simpson Field in May 2017,” Porter wrote. “From these facts, it may be inferred that the suspect had already selected Simpson Field as a potential target as early as April 2017.” 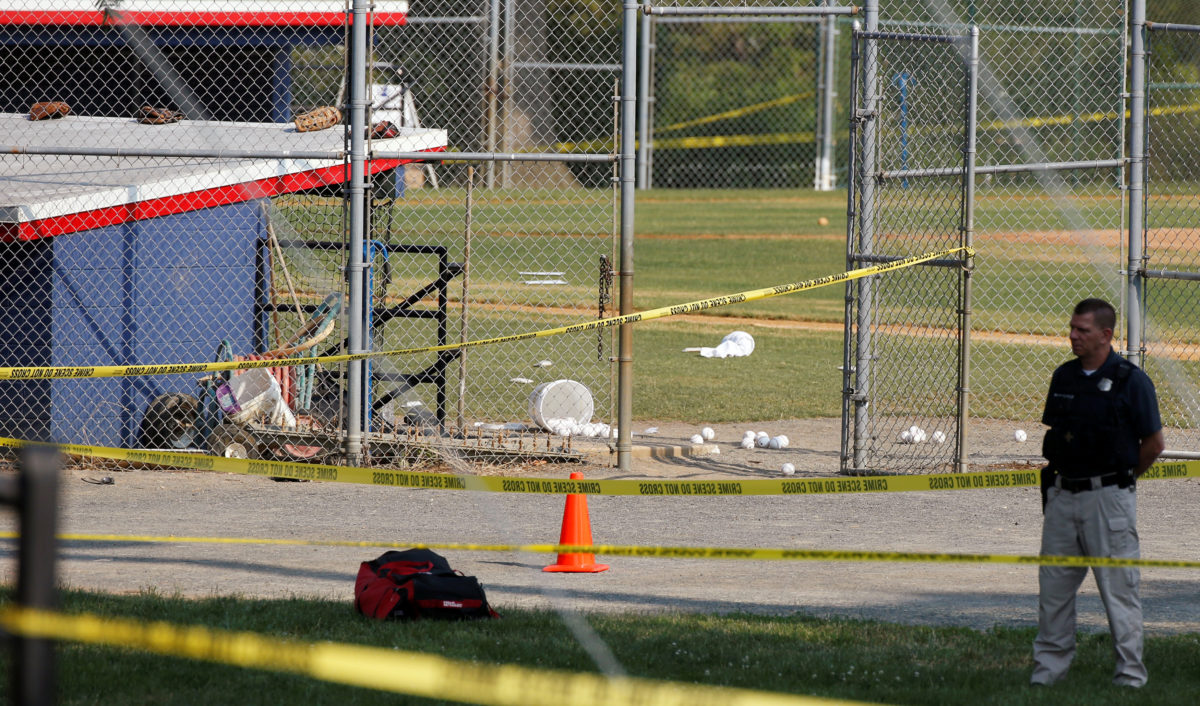 A police officer guards the shooting scene after a gunman opened fire on Republican members of Congress during a baseball practice near Washington in Alexandria, Virginia, June 14, 2017. REUTERS/Joshua Roberts

The report also notes that “Hodgkinson was increasingly making vague statements about how he would ‘not be around much longer’ to family members.”

“Hodgkinson held strong political opinions and was very unhappy about the outcome of the 2016 presidential election. He spent a significant amount of time on social media, using it to express his political views, such as his strong support for Senator Bernie Sanders’ presidential campaign.”

Hodgkinson’s social media profile was filled with violent-sounding rhetoric against the Republican Party, TheDC previously reported. “It’s Time to Destroy Trump & Co,” Hodgkinson wrote in one post. He also belonged to several anti-GOP groups on Facebook, including one called “Terminate The Republican Party.” The members of that group celebrated Hodgkinson’s mass assassination attempt.

The Daily Caller previously reported that Hodgkinson spewed left-wing talking points on Facebook, consistently railing against Republicans and the wealthy both on social media and in letters to the editor of his local paper.

“We all know that the rich don’t pay enough taxes,” he wrote in one letter. “I have never said ‘life sucks,’ only the policies of the Republicans,” he wrote in another. (RELATED: Shooting At GOP Baseball Practice Latest In Pattern Of Violence Against Republicans)

The report also confirms that Hodgkinson approached two Republican congressmen as they were leaving the field, shortly before the shooting.