The indicted husband-and-wife team of former IT aides to Democratic Rep. Debbie Wasserman Schultz sat directly across from each other at the defendants’ table in federal court Friday in Washington, D.C., but refused to look at each other.

Even as they are co-defendants in a U.S. case, Imran Awan’s own wife, Hina Alvi, has become the latest person to accuse him of fraud, filing papers against him in Pakistani court on Sept. 13, records obtained by The Daily Caller News Foundation show. Alvi said Awan “threatened the complainant of dire consequences, he also threatened to harm the lives of family of the complainant if she intervenes.”

The couple were in U.S. court to face bank fraud charges related to sending money to Pakistan around the time they learned they were under investigation for abuses related to their work managing IT for members of Congress. Awan was arrested at Dulles Airport in July attempting to board a flight to Pakistan.

Wasserman Schultz, former chair of the Democratic National Committee, and other House Democrats have vigorously defended Awan, claiming the Capitol Police might be drumming up charges out of Islamaphobia.

Yet now his own wife charges in the court papers: “My husband Imran Awan son of Muhammad Ashraf Awan, committed fraud along with offence of polygamy.”

The Pakistani legal petition named as Awan’s secret, second wife a woman who told Virginia police she felt like Awan was keeping her “like a slave.”

Respondent has contract a second marriage on 17-08-2015 with one Mst. Sumaira Shehzadi alias Sumaira Siddique… without obtaining prior permission. Rather he mentioned himself as bachelor in… marriage certificate, he falsely declared that he has no wife or biological children at the time of contracting second marriage. This act of the respondent was shocking for the complainant and she asked the respondent about his second marriage on which he became furious while admitting the same and said he has no need to obtain permission from the complainant…

Politico described Awan and Alvi as having “friendly personal relationships” with lawmakers including Democratic Rep. Gregory Meeks and Wasserman Schultz.

Alvi was arraigned Friday on four felony counts, and Awan, who has already been arraigned, requested that his GPS monitoring bracelet be taken off — citing the fact that his wife was in America as the reason he was not a flight risk.

Yet the couple entered and left the court separately, have different lawyers, and Awan’s lawyer told the judge that the husband and wife are staying “in a one-bedroom apartment and then also a house.” The Pakistani legal papers say they live in separate towns there, too.

Asked about Alvi’s allegations against her own husband of fraud and violent threats, her U.S. lawyer, Nikki Lotze, told TheDCNF “I don’t see how that’s newsworthy.”

After TheDCNF sent Gowen a copy of a Pakistani news article mentioning the complaint and asked him for comment, Gowen said “your story is totally false” and “clearly part of your Trump agenda.” At TheDCNF’s request, Wajid Ali Syed, a correspondent for Pakistan’s Geo TV, then obtained Alvi’s filing in full from the Pakistani court, and it is posted below.

Awan, his wife and two brothers — all previously on the payroll of House Democrats — became subjects of a Capitol Police investigation last year after investigators concluded they were submitting falsified invoices for equipment and had transferred “massive” data off a House server. After he was banned from the House network, Awan left a laptop with the username RepDWS in a Capitol Hill phone booth.

Although The Washington Post has reported that investigators found that Awan and his relatives made unauthorized access to a congressional server 5,400 times, Wasserman Schultz has said concern about the matter was the stuff of the “right-wing media circus fringe.”

The Pakistani legal motion filed by Alvi states: “A few months ago I got apprised of the fact that my husband has contracted second marriage secretly, fraudulently and without my consent with Mst. Sumaira Shehzadi Alias Sumaira Siddique Daughter of Muhammad Akram r/o Township, Lahore. The second marriage of my husband is illegal, unlawful and without justification.”

“The court has recorded the testimonies of the applicant and other witnesses,” the Pakistani news outlet ARY reported.

Last month, TheDCNF published police reports showing that two women who appeared to be in romantic relationships with Awan, but who were not Alvi, called the police on him in Virginia. One, Salam Chaudry, said she “just wanted to leave,” while the second was named Sumaira Siddique.

Criminal investigations involving Siddique and Awan in Virginia took place on Oct. 16, 2015 into assault, and Nov. 16, 2015 into telephone threats. Siddique called them again on July 18, 2016 and said he kept her there “like a slave.” Alvi’s lawsuit says he only married Siddique in August 2015.

Gowen also said the Virginia police report story is “totally false,” although those police reports obtained from the Fairfax County police department are online, and anyone can receive them directly from the police by submitting a Freedom Of Information Act request.

The family’s lawyers have blamed members of Congress for the billing irregularities found by investigators. A Capitol Hill Republican aide close to the probe told TheDCNF he takes members’ unusual defense of an aide accused of violating rules to indicate that they may believe a full investigation into the situation would implicate members in a procurement scheme.

The Awan family had access to the full digital files of 45 House members and their staffs, but Democrats have said they don’t believe he would abuse that access, despite a host of financial red flags, including financial ties to an Iranian fugitive and money sent to a Pakistani police officer.

In a civil case this year, Awan’s stepmother Samina Gilani accused Abid Awan, who was also on the House payroll, of stealing a $50,000 life insurance policy, and said Awan used his employment in Congress to intimidate people.

“Imran Awan introduces himself as someone from US Congress or someone from federal agencies,” she charged. He “threatened that he is very powerful and if I ever call the police [he] will do harm to me and my family members back in Pakistan and one of my cousins here in Baltimore.”

Awan wanted her to sign papers giving him access to assets stored in Pakistan in his father’s name.

Here are the court documents: 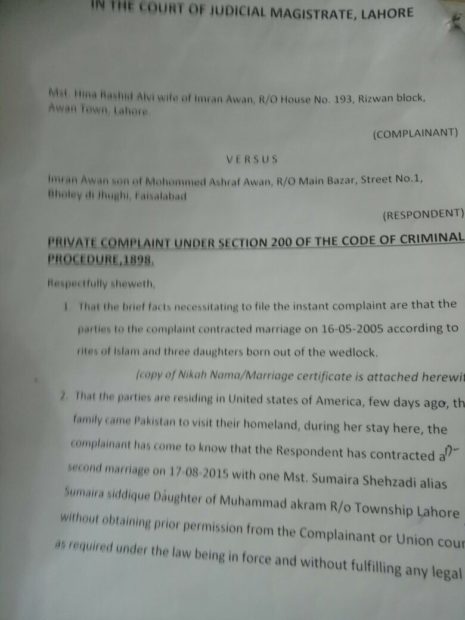 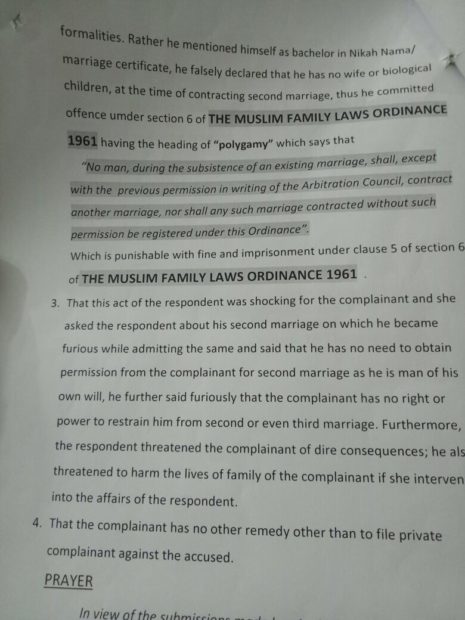 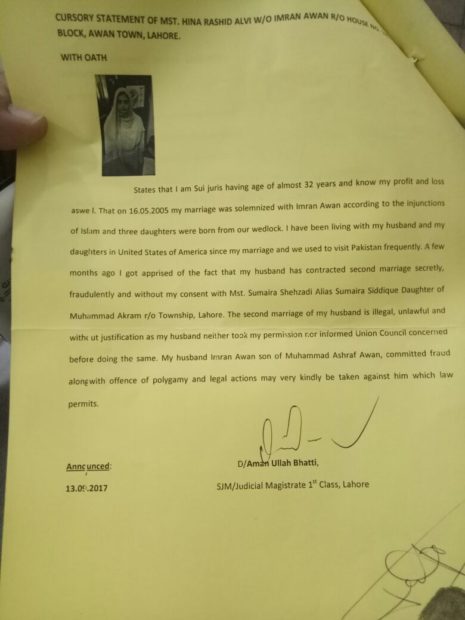 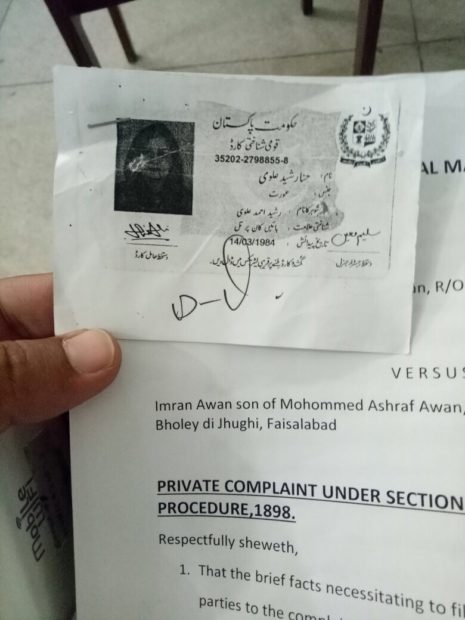 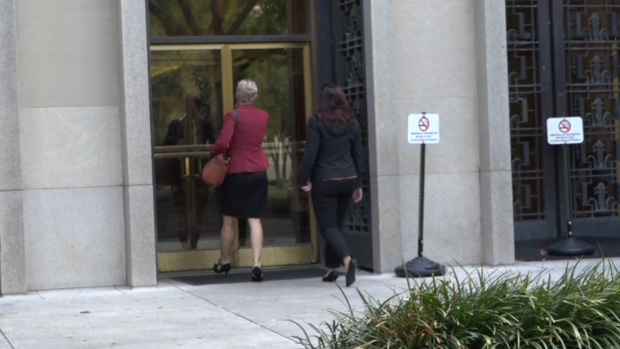 Here is how the 17 female members of Congress who once employed Awan responded when TheDCNF provided copies of the police reports to their offices.