The ratings for the NFL’s “Thursday Night Football” game dropped 5 percent over the week prior amid the ongoing national anthem debate.

The Philadelphia Eagles beat the Carolina Panthers 28-23 in North Carolina. According to Deadline, the overnight ratings earned a 10.6/18 in metered market results. (RELATED: ‘Thursday Night Football’ Ratings Up Over Last Week) 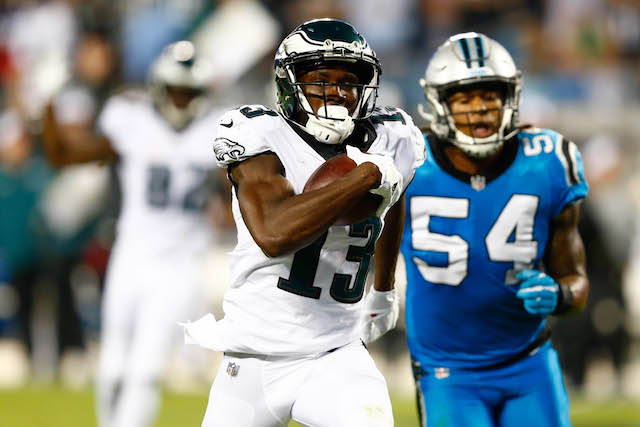 Philadelphia Eagles wide receiver Nelson Agholor (13) runs in for a touchdown after a catch in the third quarter at Bank of America Stadium, Oct. 12, 2017, in Charlotte, N.C. Jeremy Brevard-USA TODAY Sports

Before last week’s game, the players and coaches held a moment of silence to honor the victims who were killed in the Las Vegas massacre. All the Buccaneers and Patriots players stood for the national anthem.

Attempting to skirt the matter, CBS and the National Football League network opted not to air the national anthem, so the TV audience missed the Panthers all standing together during the song and several Eagles players raising a fist in the air as a sign of unity.