The number of people who could have provided BuzzFeed News with a copy of the infamous Trump dossier is vanishingly small. Only a few people had access to the full document, which consists of 17 memos dated between June 20, 2016 and Dec. 13.

One person who was provided a copy of the salacious document, written by former British spy Christopher Steele, is Arizona Sen. John McCain. But McCain, who has already acknowledged providing an early version of the dossier to former FBI Director James Comey, denied this week that he also gave a version to BuzzFeed, which published it on Jan. 10.

“I gave it to no one except for the director of the FBI. I don’t know why you’re digging this up now,” McCain said during a testy exchange with The Daily Caller on Wednesday.

McCain was asked whether he was BuzzFeed’s source after the Republican’s office declined to answer direct questions on the matter.

Only a few people are known to have had possession of the full 35-page document before BuzzFeed obtained its copy.

In addition to McCain and Steele, opposition research firm Fusion GPS had the dossier, as did David J. Kramer, a former State Department official and an associate of McCain’s.

Earlier this week, BuzzFeed reporter Ken Bensinger disclosed in federal court — in response to a lawsuit related to the dossier — that he obtained a copy of the report in December. Bensinger said that his source allowed him to take photographs of the dossier. (RELATED: New Court Filing Re-Opens Question Of Who Gave Dossier To BuzzFeed)

The identity of BuzzFeed’s source is significant for two reasons.

It is a central question in a lawsuit filed against the media outlet by Aleksej Gubarev, a Russian tech executive named in the dossier. Gubarev is identified by name in Steele’s Dec. 13 memo. In it, Steele alleges that Gubarev was recruited under duress by the FSB, Russia’s intelligence agency, and that he used his companies to infiltrate the computer systems of the Democratic National Committee.

Gubarev’s attorneys have said they want to find out if BuzzFeed’s source provided any warnings or qualifications about the allegations made in the dossier. If so, the lawyers are likely to argue that BuzzFeed was negligent and careless in publishing the document.

BuzzFeed, which has apologized to Gubarev, has defended its decision to publish the dossier, noting that its article unveiling the Steele memos explicitly stated that the memos had not been corroborated. The website also said that the dossier was newsworthy because Comey had briefed President Trump on its allegations during a meeting on Jan. 6.

On top of its importance to the lawsuit, the identity of BuzzFeed’s source is of widespread interest because of the possibility that a government official disseminated the uncorroborated document to the media, possibly as a hit job on Trump.

It was widely believed until recently that Fusion GPS itself gave the dossier to BuzzFeed. The opposition research firm, founded by former Wall Street Journal reporters, has close relationships with numerous Beltway journalists. Prior to the election, Fusion arranged for Steele to brief several reporters on his findings. (RELATED: Details Emerge About Trump Dossier Firm’s Media Outreach Campaign)

In a surprise twist, Fusion recently denied in a court proceeding that it gave BuzzFeed the final version of the document.

“Buzzfeed went to [Fusion GPS] and tried to get the dossier from them and they refused to give it to Buzzfeed,” Evan Fray-Witzer, a lawyer for Gubarev, said in a deposition last month in federal court in Florida, where BuzzFeed is being sued.

Steele has also denied that he was BuzzFeed’s source. In court filings in London, where he is being sued by Gubarev, he said he did not give the dossier to any news outlets.

McCain and Kramer, a former official at the McCain Institute, were first told about the dossier in November, during a conversation with Sir Andrew Wood, a former British spy and associate of Steele’s. McCain then dispatched Kramer to meet with Steele in London on Nov. 28.

Steele, who operates Orbis Business Intelligence in London, has revealed in the London lawsuit that he allowed Kramer to view the dossier but did not provide him a copy. He said that an “arrangement” was later made for Fusion to provide a copy of the dossier to McCain through Kramer. 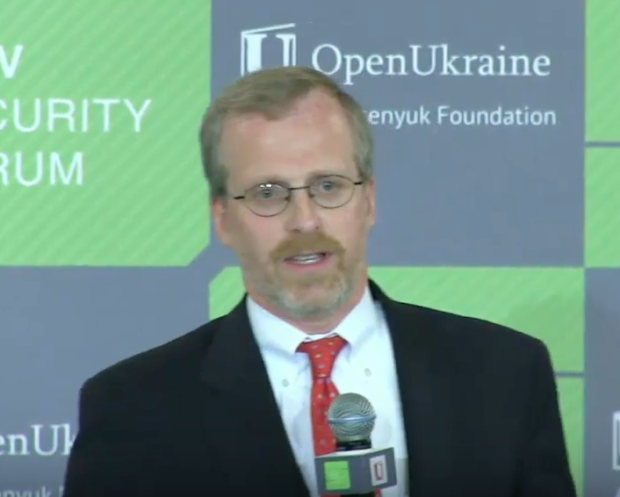 McCain then provided a copy of the document to Comey during a Dec. 9 meeting.

Four days after McCain met with Comey, Steele would produce the final memo of the dossier, the one that was provided to BuzzFeed and which included the allegations against Gubarev.

Steele sent the final memo to Fusion with instructions to pass a hard-copy to Kramer and McCain. It is unclear how the dossier was disseminated after that. Fusion has not said whether it disseminated the final version of the dossier to anyone outside the company.

The denials by Steele, Fusion and McCain that they were BuzzFeed’s sources leaves just a few posibilities, including Kramer.

Kramer has not responded to multiple requests for comment about his handling of the dossier or whether he gave it to any news outlets. He has not talked on the record to any reporters since being identified in the controversy.