Rutgers University is disavowing one of its professors who was outed as an anti-Semite through posts he shared on social media.

On his Facebook page, professor Michael Chikindas shared a series of aggressively anti-Semitic posts from neo-Nazi websites that compared Jews to parasites and terrorists, among other things.

Rutgers calls the posts “antithetical to our university’s principles and values,” acknowledging that while he has a right to free speech, the university is going to investigate whether the professor violated the school’s anti-discrimination policy.

Chikindas’ posts first became public knowledge after they were first discovered and documented by Israellycool blog, and later posted to The Algemeiner on Tuesday.

In the posts, Chikindas, who teaches microbiology at Rutgers’ department of food science and is the director of the school’s Center for Digestive Health, promoted a variety of anti-Jewish conspiracy theories. He blamed the Jews on the Armenian genocide and called Judaism “the most racist religion in the world,” adding that Israel is a “terrorist country.”

“Israel is the terrorist country aimed at genocidal extermination of the land’s native population, Palestinians,” wrote Chikindas is one of the posts. “We must not forget that the Armenian Genocide was orchestrated by the Turkish Jews who pretended to be the Turks.”

He also claimed in an earlier post that Jews were attempting to “exterminate” Palestinians, but only failed to do so because a quarter of Israel’s population are homosexual. “Israel, the country of the Jews and for the Jews, has one of the highest percentage of gays in the world,” he wrote, without factual basis.

He also shared links to conspiracy theories claiming that the Jews were responsible for orchestrating the 9/11 terrorist attacks in 2001. 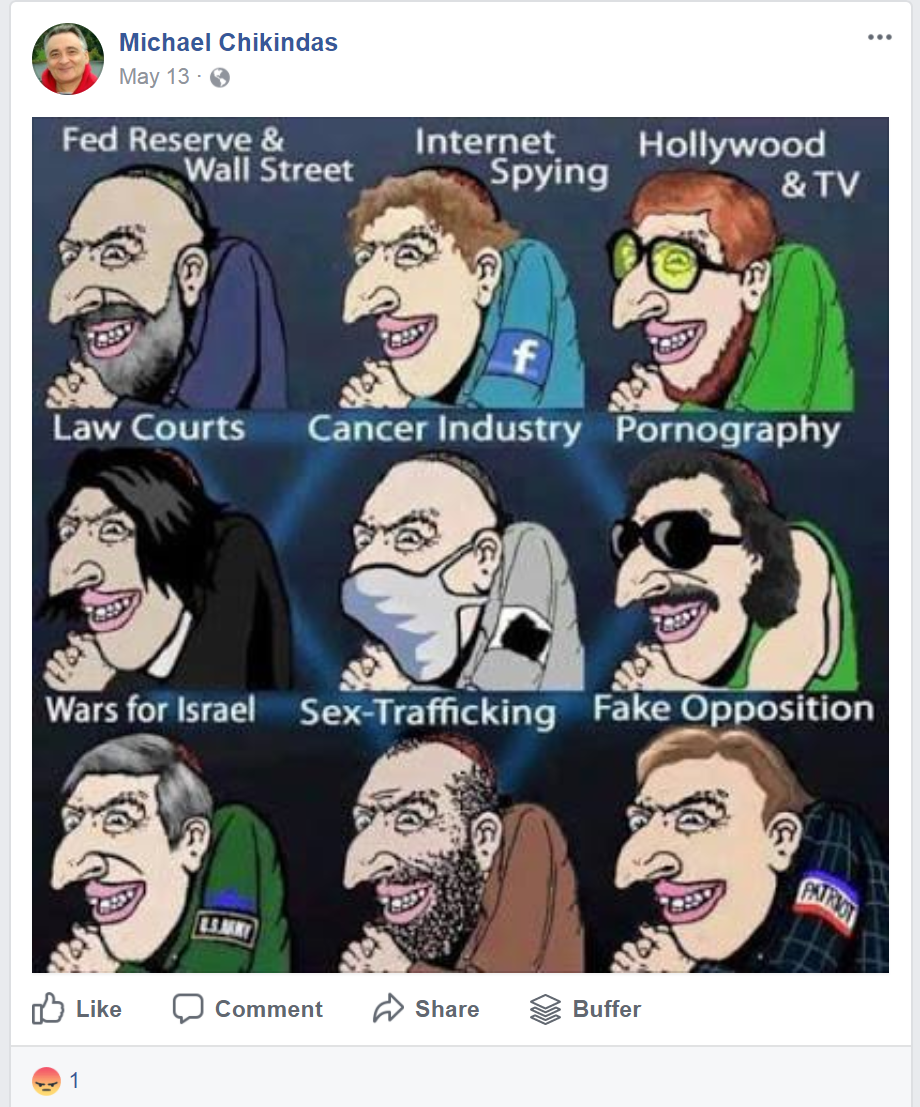 Aside from his claims, Chikindas shared numerous anti-Semitic pictures and memes, including nine variations of the “happy merchant” Jew controlling various aspects of society, including the Federal Reserve, Hollywood, the “Cancer Industry,” and so on.

No fan of President Trump, Chikindas assailed Ivanka and Melania Trump as “two bitches dressed like ‘black widows,’” referring to photographs of Trump’s family in the Vatican City. He also referred to Jared Kushner as a “Jewish money bag.”

Chikindas attempted to acquit himself of anti-Semitic allegations in an interview with The Algemeiner, claiming that he is 25 percent Askhenazi Jew. In a self-contradictory statement to NJ.com, the professor said that his Facebook got hacked, but didn’t deny sharing the anti-Semitic material.