The heart wants what it wants.

ABC “The View’s” newest Republican-leaning co-host Meghan McCain has been alluding to a secret boyfriend for quite sometimes now. In her first days on “The View” she mentioned that she was “taken” and spoke extensively about this mystery man when her father, Sen. John McCain (R-Ariz), appeared on the show.

Sen. McCain deadpanned that the lad — whoever he was — was not funny. Ultimately he commented more seriously about him and said he was “very happy” for his daughter and called him a “fine man.”

That guy is a mystery no more — he’s Ben Domenech, publisher and founder of The Federalist, a right-leaning publication. 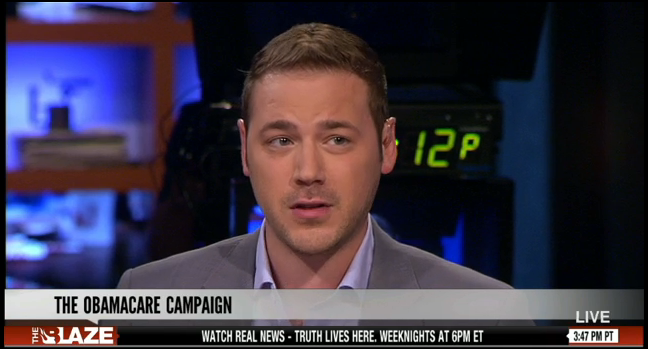 “I am engaged. I love him very much and I’m very happy,” McCain said, explaining that it happened after a trip to the Mayo Clinic when her father had her scan that revealed he had an aggressive form of brain cancer.  “It’s not the most romantic story.” She said they decided it would be a “celebration of life.”

Life comes at you fast… pic.twitter.com/impB5XC9ZY

Five years later, things have obviously taken a drastically different route and McCain and Domenech are now engaged, as first reported by New York Post‘s Page Six. Us Weekly previously reported that McCain and her beau were wedding planning, but they didn’t drop the bomb on who he was.

Domenech, who also co-founded RedState, has a cloud of plagiarism hanging over him from his past, but it is not definitive.

In 2006, The Washington Post hired him to write for their new Red America Blog. But bloggers quickly came out of the woodworks to accuse him of plagiarizing material when he was a columnist for the William & Mary college newspaper The Flat Hat and a few other pubs such as National Review Online.

Domenech posted two statements about the matter on RedState.

“I ONCE CAUGHT AN EDITOR AT THE PAPER INSERTING A LINE FROM THE NEW YORKER (WHICH I READ) INTO MY COPY AND PROTESTED. WHEN THAT EDITOR WAS PROMOTED, I RESIGNED. BEFORE THAT, INSERTIONS HAD BEEN ROUTINELY MADE IN MY COPY, WHICH I DID NOT QUESTION. I DID NOT EVEN AT THAT TIME READ THE PUBLICATIONS FROM WHICH I AM NOW ALLEGED TO HAVE LIFTED MATERIAL. WHEN THESE INSERTIONS WERE MADE, I ASSUMED, LIKE MOST DISGRUNTLED WRITERS WOULD, THAT THEY WERE UNNECESSARY BUT LEGITIMATE EDITORIAL ADDITIONS.”

The update to do this is no longer available on RedState.

But part of it was posted on a site called Plagiarism Today.

“I WANT TO APOLOGIZE TO NATIONAL REVIEW ONLINE, MY FRIENDS AND COLLEAGUES HERE AT REDSTATE, AND TO ANY OTHERS THAT HAVE BEEN AFFECTED OVER THE PAST FEW DAYS. I ALSO WANT TO APOLOGIZE TO MY PREVIOUS EDITORS AND WRITERS WHOSE WORK I USED INAPPROPRIATELY AND WITHOUT ATTRIBUTION. THERE IS NO EXCUSE FOR THIS – NOR IS THERE AN EXCUSE FOR ANY OBFUSCATION IN MY EARLIER STATEMENT.”