Democratic California Sen. Kamala Harris joined a group of young protesters who stormed the Senate Hart office building Thursday morning, standing amongst the crowd and raising her fist in the air in solidarity.

A Senate source told the Daily Caller News Foundation that between three and four hundred protesters, most of whom appeared to be high school age, descended on the office building. The protesters, wearing orange shirts adorned with messages in support of the Deferred Action for Childhood Arrivals (DACA), initially stood quietly with their fists raised and eventually started screaming.

“A bunch of high school age kids wearing orange tee shirts basically invaded the senate. There were three to maybe four hundred of them. They were quiet at first, didn’t make a sound, and then probably at 11 o’clock, they started to raise the black power fist. It was very clear what it was inspired by and they all held it up,” the Senate source told TheDCNF. “Then after 10 minutes they started to scream. When they started raising up the fist, you could see Kamala Harris. I don’t know if she addressed them, but she was definitely joining them.”

Based on the protester’s signs and their chanting, it appears the gathering was inspired by President Donald Trump’s decision to phase out the DACA program.

The program, instituted in 2012, shielded immigrants brought to the country illegally as children from deportation. Trump announced his intention to discontinue the program in September but has called on Congress to implement a legislative solution that will prevent people already in the U.S. from being deported once the two year phase out period concludes.

Shirts worn by protesters carried messages calling for a “clean” DACA bill. The use of the term “clean” refers to a bill absent the security measures called for by Republicans.

Harris, an outspoken advocate for more permissive immigration law, spoke out in support of a “clean” DACA bill in October. 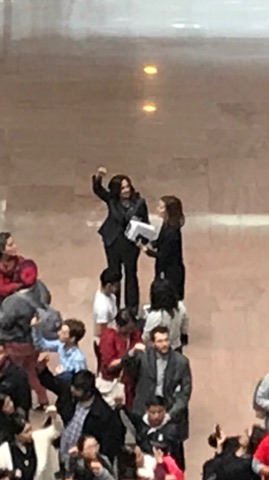 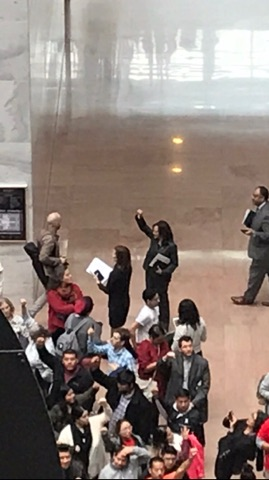 “This is about, believing in the values upon which this country was founded,” Harris said at the University of California-Irvine, according to The Orange County Register. “The path right now is rocky. It is difficult. It is hard.”

“We are witnessing things that we can only describe as awful and wrong, and mean-spirited. But that’s OK … Because we know this is about doing the right thing. We know this is about all the young people, who were brought here, some before they could walk or talk,” she said.

Democratic leadership’s willingness to negotiate with the Trump administration on the issue of immigration has led to a splintering within the party as progressives view any concessions as an abandonment of core principles.

Harris’ office did not immediately respond to the DCNF’s request for comment.

1
Here's Why Californians Are Getting Reamed At The Gas Pump Despite Rock-Bottom Oil Prices
Energy
2
Dr. Anthony Fauci Predicts How Many Will Die From Coronavirus In United States
US
3
Joe Biden Said To Believe Women Who Say They're Sexual Assault Victims. Now He's Denying A Woman's Sexual Assault Accusation
Politics
4
Tucker Carlson Insists Biden 'Will Not Be The Democratic Nominee.' Here's Who He Predicts Will Assume The Mantle
Media
5
CCW Weekend: Can't Go To The Range, Can't Get Ammo, Might As Well Do This Instead
Concealed Carry & Home Defense