Arkansas will reportedly move on from football coach Bret Bielema at the end of the season.

The Hogs athletic department is dumping Bielema after five horrible and disappointing seasons, according to SB Nation. 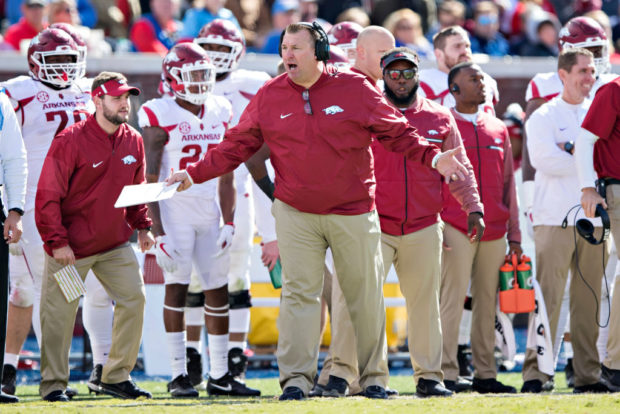 OXFORD, MS – OCTOBER 28: Head Coach Bret Bielema of the Arkansas Razorbacks yells to a official during a game against the Ole Miss Rebels at Hemingway Stadium on October 28, 2017 in Oxford, Mississippi. The Razorbacks defeated the Rebels 38-37. (Photo by Wesley Hitt/Getty Images)

I know this isn’t official yet, but when is it too early to pop the champagne? We can either do it today, and we can wait until he’s officially shown the exit door. I think it’d be best to wait. I really want to savor this victory.

Shoutout to all the fans and supporters out there who sided with me during this righteous cause. It took America four years to end WWII, and it only took me a little more than a year to end Bret Bielema’s career in the SEC. You can tell me which is more impressive.

I won’t say much more right now. Bielema’s official firing deserves a flashy celebration. That’s going to take a considerable amount of planning. Tune in next week to watch me dance all over his coaching career’s grave. It’s going to be majestic.

P.S.: He thought he couldn’t win with the Wisconsin Badgers, who are currently 11-0. Life is funny sometimes.