A federal court unsealed documents in a lawsuit over Fusion GPS’s bank records on Tuesday, revealing new details of payments made last year to the opposition research firm that commissioned the infamous Trump dossier.

The documents also shed new light on requests made by the House Permanent Select Committee on Intelligence about payments that Fusion GPS made to journalists.

The records were unsealed in response to a ruling made last week by Richard Leon, a federal judge in the district court in Washington, D.C.

Most are redacted, save for transactions between two law firms that the oppo firm worked with last year on two Russia-related projects.

The largest payment was made just before the election. Perkins Coie made a $365,275 payment to Fusion GPS on Oct. 28, 2016, according to the records.

A payment made to Fusion in late-December is later than previously thought.

The transaction list does not show payments that Fusion made to Christopher Steele, the former British spy who wrote the dossier. The firm reportedly paid Steele a total of $168,000 for his work, which lasted from June 2016 until the election.

Fusion worked for BakerHostetler to investigate Bill Browder, a London-based banker who helped push through the Magnitsky Act, a sanctions law vehemently opposed by the Kremlin.

Katsyv and Prevezon sought to limit the impact of the Magnitsky sanctions.

Glenn Simpson, a former Wall Street Journal reporter and Fusion GPS founding partner, compiled the research for the anti-Browder project. He worked closely with Natalia Veselnitskaya, the Russian lawyer who also showed up at the infamous Trump Tower meeting held on June 9, 2016.

Simpson’s research ended up in the Trump Tower meeting in the form of a four-page memo carried by Veselnitskaya. She also shared Simpson’s work with Yuri Chaika, the prosecutor general of Russia.

Simpson told the House Intelligence Committee earlier this week that he did not know that Veselnitskaya provided the Browder information to Chaika or to Donald Trump Jr., the Trump campaign’s point-man in the Trump Tower meeting.

Simpson testified that he did not know that Veselnitskaya had visited Trump Tower until it was reported in the press earlier this year. 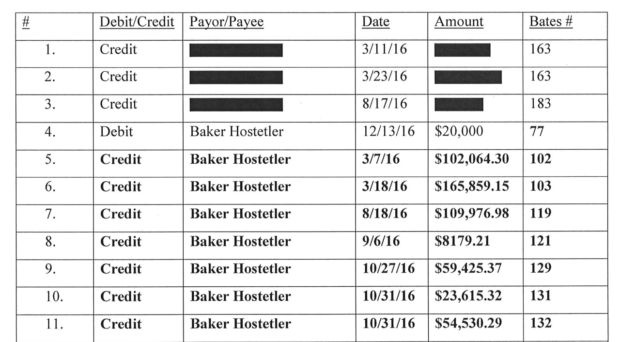 The unsealed documents also reveal details of the House committee’s requests for records related to Fusion’s payments to journalists.

The document shows that the committee sought records related to “five Fusion payments to research and Russia expert [name redacted], and production of three additional payments.”

The committee also seeks records “related to Fusion’s payments to journalists who have reported on Russia issues relevant to its investigation.”

In a memo filed Tuesday, lawyers for the House panel said they are seeking transactions related to nine payments made to “three individual journalists…each of whom have reported on and/or been quoted in articles regarding topics related to the Committee’s investigation, some of which were published as recently as October 2017.”

The names of the journalists are redacted in the filing.

It is not clear from the requests whether Fusion GPS paid active journalists for their work. The firm is known to employ a stable of former reporters. Simpson and his two founding partners, Peter Fritsch and Thomas Catan, worked together at The Wall Street Journal.

The unsealed filings show that Fusion argued against releasing records related to payments to journalists.

In a Nov. 3 declaration, Fritsch argued that “transactions between Fusion GPS and certain journalists…are not pertinent to work related to Russia or Donald Trump.”

And in a Nov. 2 email to the Intel committee’s legal team, Levy argued that “records related to payments to the journalists and ‘individuals’ are protected by the First Amendment and confidentiality, and they are not pertinent.”