Speeding freight trains have slain more than 100 reindeer in Norway since last week, marking the most deadly 12-month period ever for the area.

Reindeer deaths are common this time of year as herders begin migrating their populations toward coastal pastures for the winter. More than 250 of the animals have been killed since last November, triggering outrage from herders and calls to erect barriers around train tracks. The worst incident reportedly occurred Saturday when 65 reindeer were killed, Fox News reported.

Torstein Appfjell, a reindeer herder who has lost some of his animals, told Sky News he was “dizzy with anger” at the “unprecedented” loss of 106 animals. Appfjell herds roughly 2,000 reindeer and has joined local residents in calling for a barrier after train operators have seemingly ignored directions to drive slowly. Some freight companies have reportedly cited “technical failures” to explain their speed.

Jon Erling Utsi, a documentary filmmaker who photographed Saturday’s incident, told reporters “it was a nightmare to watch.”

“The worst thing was the animals that were not killed in the accident, they were lying there, suffering,” Utsi said. “It was a bloodbath over several kilometers.” 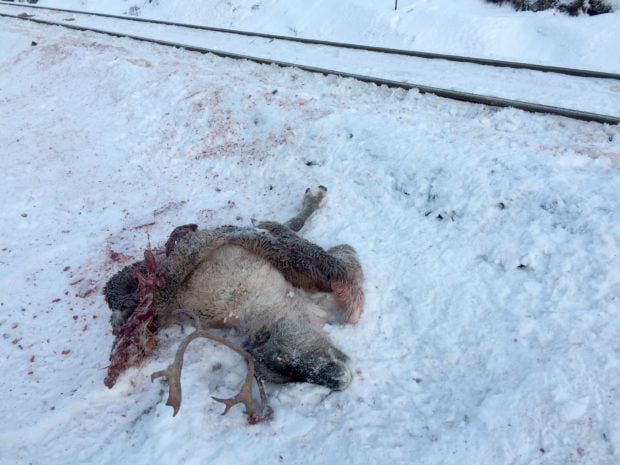 A dead reindeer laying next to the railway near Mosjoen in northern Norway. (Photo credit  JOHN ERLING UTSI/Getty Images)

Norway has a population of roughly 250,00o reindeer, and migratory deaths have become an annual occurrence. More than 2,000 reindeer were reportedly killed along the same railway line between 2013 and 2016.