The federal oversight board that publicly complained late last month about small Christmas bonuses for Puerto Rico’s government employees is squandering millions of dollars to pay lawyers who charge hundreds of dollars per hour and to hire lobbying firms and public relations firms.

The members of the Financial Oversight and Management Board for Puerto Rico are also paid lavish salaries.

Taxpayers in Puerto Rico are directly paying the salaries for oversight board employees. Puerto Rican taxpayers are also directly funding the entire $60 million annual budget for the oversight board, which Congress created in 2016 to manage Puerto Rico’s bankruptcy debt repayment.

In its strongly-worded Nov. 27 letter to Gov. Ricardo A. Rosselló Nevares, the congressionally-mandated board has argued that providing Christmas bonuses of about $600 each to government employees on the storm-ravaged island would increase “the liquidity strain on the Commonwealth” and exhibit “a lack of fiscal discipline.”

The oversight board’s executive director, Natalie A. Jaresko, receives a salary of $625,000. By way of comparison, Donald Trump earns $400,000 per year as president. Thus, Jaresko brings home $225,000 more per year than Trump — and makes the equivalent of 1,041 Christmas bonuses. (Jaresko also receives additional cash for travel and security expenses. And she gets a car and her own personal driver.) 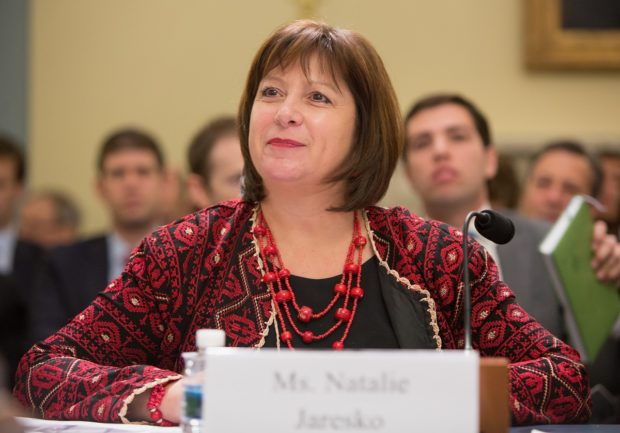 Members of the Financial Oversight and Management Board for Puerto Rico have demanded a massive budget increase, from $31 million — about $3 million per month in the first 10 months of 2017 — to a request for $59.8 million for the coming year.

About 5 percent of the $59.8 million covers salaries alone. The board appears to have 14 employees: a three-person executive team, eight regular members and three additional employees. Budget figures obtained by The Daily Caller show a projected payroll of $3 million, which works out to an arithmetic mean of $214,000 per employee salary.

This average salary of $214,000 is Financial Oversight and Management Board is 1,065 percent of the $20,078 median annual household income in Rico.

Jaresko, the executive director of the oversight board, makes the equivalent of a typical Puerto Rico government employee’s $600 Christmas bonus in just under two hours.

Beyond generous salaries, the Financial Oversight and Management Board for Puerto Rico has projected that it will spend much of its proposed $59.8 million annual budget on lobbyists, high-priced lawyers and public relations.

Fees paid to lawyers will eat up a huge chunk of the oversight board’s proposed $59.8 million annual budget for 2017.

For example, the board has retained Munger, Tolles & Olsen LLP, a law firm based in California, according to NotiCel, a San Juan-based newspaper.

Munger, Tolles & Olsen attorney Donald B. Verrilli, Jr., a former U.S. solicitor general in the Obama administration, will charge Puerto Rico’s taxpayer the princely sum of $1,225 per hour for resolving the Caribbean island’s outstanding debts. (A $600 Christmas bonus is thus equal to less than 21 minutes of Verrilli’s billed time.)

Other Munger, Tolles & Olsen attorneys who will work for the Financial Oversight and Management Board for Puerto Rico include Ginger D. Anders, who charges $800 per hour; Chad Golder, who charges $735 per hour; and Sarah G. Boyce and Adele M. El-Khouri, who each charge $600 per hour for their services.

Munger, Tolles & Olsen will also bill Puerto Rico’s taxpayers between $190 and $320 per hour for the work of its paralegal employees.

(Verrilli, the $1,225-per-hour attorney, has indicated that Munger, Tolles & Olsen is willing to discount its hourly rates on the backs of Puerto Rican taxpayers by 15 percent.)

Other law firms on retainer with the oversight board include O’Neill & Borges, a San Juan law firm, and Proskauer Rose LLP, a law firm based in Chicago that will charge Puerto Rican taxpayers between $650 and $1,000 per hour.

The Financial Oversight and Management Board for Puerto Rico is also forking over excessive sums of money to consulting firms.

So far in 2017, Puerto Rico has sent more than $1 million each month to McKinsey & Company, according to The New Yorker.

The oversight board expects to pay a total of $16 million to the “global management consulting” firm, according to Metro Puerto Rico.

Additionally, the Financial Oversight and Management Board for Puerto Rico plans to spend extravagantly on lobbying firms.

The oversight board will pay the Washington, D.C.-based lobbying firm Williams & Jensen $60,000 each month for “pursuing favorable actions by the Federal government” and other services, according to NotiCel.

The Puerto Rico oversight board has also retained a second Washington, D.C.-based lobbying firm, Off Hill Strategies, for $15,000 each month.

Other clients of Off Hill Strategies — “Pointing You in the Right Direction” — include Google and eBay.

The cost of retaining Williams & Jensen and Off Hill Strategies to lobby the federal government for a single month is equivalent to the Christmas bonuses of 125 Puerto Rico government employees.

Another expense the Financial Oversight and Management Board has agreed to pay is a $4,290 fee to a company called Lighthouse Translations for the task of translating U.S. federal law into Spanish, according to El Nuevo Día, Puerto Rico’s largest newspaper.

The Financial Oversight and Management Board has complained that the decision by Puerto Rico’s government to pay Christmas bonuses to government employees is unwise because the cash-strapped island has requested $94 billion in federal taxpayer-funded recovery money after Hurricane Irma and Hurricane Maria.

Rosselló, Puerto Rico’s governor, has noted that a law in Puerto Rico requires the government to provide the Christmas bonuses, according to Bloomberg.

The law existed for many years before the hurricanes.

The total cost of the Christmas bonuses is about $113 million. The amount was included in the budget of the commonwealth before two hurricanes wrecked the island earlier this year.

“Our public employees have done an admirable job for the recovery of the island,” Rosselló said in a statement obtained by Bloomberg. “Without them the job would be impossible, and we should make good on their Christmas bonus on time.”

The Financial Oversight and Management Board sued in an attempt to stop the Christmas bonus payments, but later retracted its lawsuit.