Kim ascended the 9,022-foot Mount Paektu — “the holy mountain of revolution,” the Korean Central News Agency (KCNA) reported Saturday. The young despot isn’t exactly in great shape, and there are rumors that he developed gout last year due to his tendency to consume wine and cheese in excess while his people starve. Kim reportedly revealed to those accompanying him that “he had often climbed Mt. Paektu,” an active volcano on the China-Korean border and important North Korean cultural site.

In winter, the mountain is covered with snow, and it is believed to be a somewhat difficult climb. 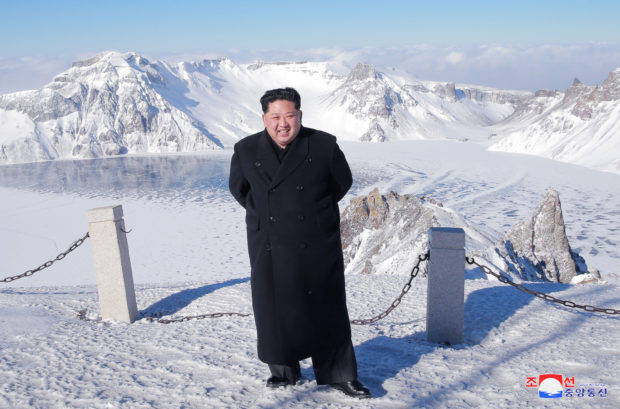 But, where the KCNA report on Kim’s mountain adventure gets especially weird is a section that appears to suggest that the North Korean dictator has the power to control the weather.

“As if to give warm welcome to him who brought the ‘great November event’ of the great Korea (a reference to the successful test of the Hwasong-15 intercontinental ballistic missile on Nov. 29) and show joy at the appearance of the peerlessly illustrious commander who controls the nature,” the lake at the top of Mt. Paektu “presented charming scenery showing magic peaks and dazzling sunshine on its clear and blue waves.”

The report said the weather was even nicer than what the country might see in spring. Indeed, the weather appears nicer than Kim’s 2015 trip to Mt. Paektu, of which Kim is supposedly the “master.”

Kim reportedly stood at the peak, “recalling the emotion-charged days when he realized the great historic cause of completing the state nuclear force without yielding even a moment and with the indomitable faith and will of Paektu,” KCNA wrote in its report, making another reference to the most recent missile test, during which North Korea demonstrated the theoretical ability to strike any target anywhere in the continental U.S.

Mt. Paektu is a special place in North Korea, as it is, according to North Korea’s official version of history, where North Korean founder Kim Il Sung reportedly organized partisan groups to fight the Japanese occupation forces and the ancestral birthplace of the current despot’s late father — Kim Jong Il, who North Korea claimed could also control the weather with his mind.

While history does not at all support the North’s foundation myth, the Kim family and its “Mt. Paektu bloodline” is deified and Mt. Paektu is a North Korean holy site. It is the aspiration of many North Koreans to complete a pilgrimage to the rather beautiful volcano at least once in their lives.