Protests over Trump’s move have sparked riots in Jerusalem, the Gaza Strip and even violent protests in Europe, from Germany to Sweden. But how exactly did Arab Muslims treat Christians and Jews when they ruled over Jerusalem for 19 years?

It appears Arabs were anything but tolerant toward either. The Daily Caller News Foundation examined Arab rule over the eastern half of Jerusalem from 1949 until 1967, and found that both Christians and Jews were routinely denied religious freedom and often faced persecution at the hands of the Arabs when Muslims were in charge of the eastern half of the holy city.

In 1947, the United Nations approved a partition plan to permit both Jews and Muslims to govern separate sectors. Israel accepted the plan but the Arabs refused it and sent their armies against a group of citizen-soldiers.

The Israelis won a surprising victory in what they called their War of Independence. In 1949, an armistice was signed by both Jordan and Israel, signaling the end to the conflict.

The western half of Jerusalem was to be governed by Israel and the eastern half by the Jordanian Hashemite Kingdom. The Jewish Quarter and many of the most sacred Jewish sites were located in the eastern half ruled by Jordan and local Arabs. 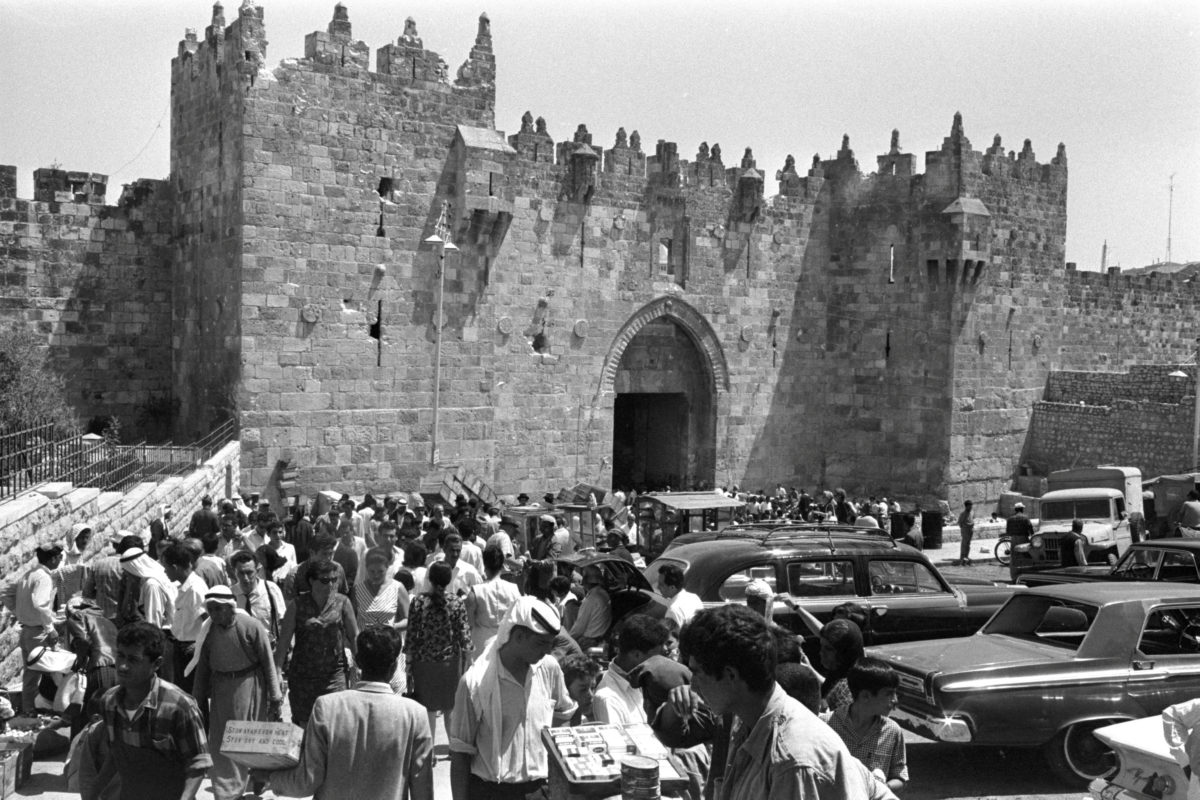 People walk near Damascus Gate leading into Jerusalem’s Old City taken July 14, 1967. On June 1967 Jews were allowed to enter the eastern half of Jerusalem for the first time in 19 years. Fritz Cohen/Courtesy of Government Press Office/Handout via Reuters

From the very start, the Jordanians banned Jews outright, even though the armistice promised “free access to the holy sites and cultural institutions and use of the cemeteries on the Mount of Olives.”

But the Arab governing bodies also persecuted the Christian church and its followers during the same 19 years it ruled over Jerusalem.

“Christian residents, like Jews, did not have equal rights,” noted pastor John C. Hagee, founder and chairman of Christians United for Israel, in an interview with TheDCNF.

Jordanian and local Arab edicts prohibited Christians and later Christian churches from buying land and houses in the Old City of Jerusalem, according to the nonprofit Gatestone Institute.

The Institute reported that Arab Muslims restricted the number of Christian pilgrimages permitted in Jerusalem and Bethlehem during Christmas and Easter. They further imposed strict rules on Christian schools, including mandatory teaching of the Muslim Koran.

Hagee recounted the many indignities suffered by Christians who lived in Jerusalem.

“In 1952, Jordan proclaimed Islam as the official religion, including in Jerusalem,” he recalled. “In 1953, Christians were constrained for buying or holding land near holy sites. In 1955, all Jordanian schools were to be overseen by the government and only government-sanctioned textbooks could be used. In 1964, Churches were prohibited from buying land in Jerusalem. Churches were barred from funding hospitals or social services in Jerusalem.”

While Christians faced hardship and very harsh restrictions, Jews were banished entirely from the holy city.

From 1949 onward, there were no Jewish homes, synagogues or businesses in ancient Jerusalem. Jewish homes were taken over and occupied by Arabs and Jews lost their businesses. Most Jews fled to the western half of Jerusalem or to other parts of the Israel. Israelis or Jews of any nationality could not enter the Muslim section of Jerusalem for 19 years.

The treatment of Jewish synagogues and holy sites were documented when Jewish forces entered the Old City after the Six Day War in June 1967. An official November 1967 report by Israel’s Minister of Religious Affairs found “wanton disregard of the religious rights of others,” according to news reported at the time by The Jewish Telegraph Agency.

When the Israelis entered the eastern part of Jerusalem, they found the most sacred ancient Jewish shrines had been desecrated or totally destroyed by the Jordanian army or by local Arab residents.

One of the most spectacular acts of desecration was the destruction of the 2,000-year old Jewish cemetery on the Mount of Olives, which was supposed to be protected by the armistice. Christian clergy who raised concerns about the desecration of the cemetery was told by Jordanian authorities “to mind his own business,” according to the 1967 Israeli report. 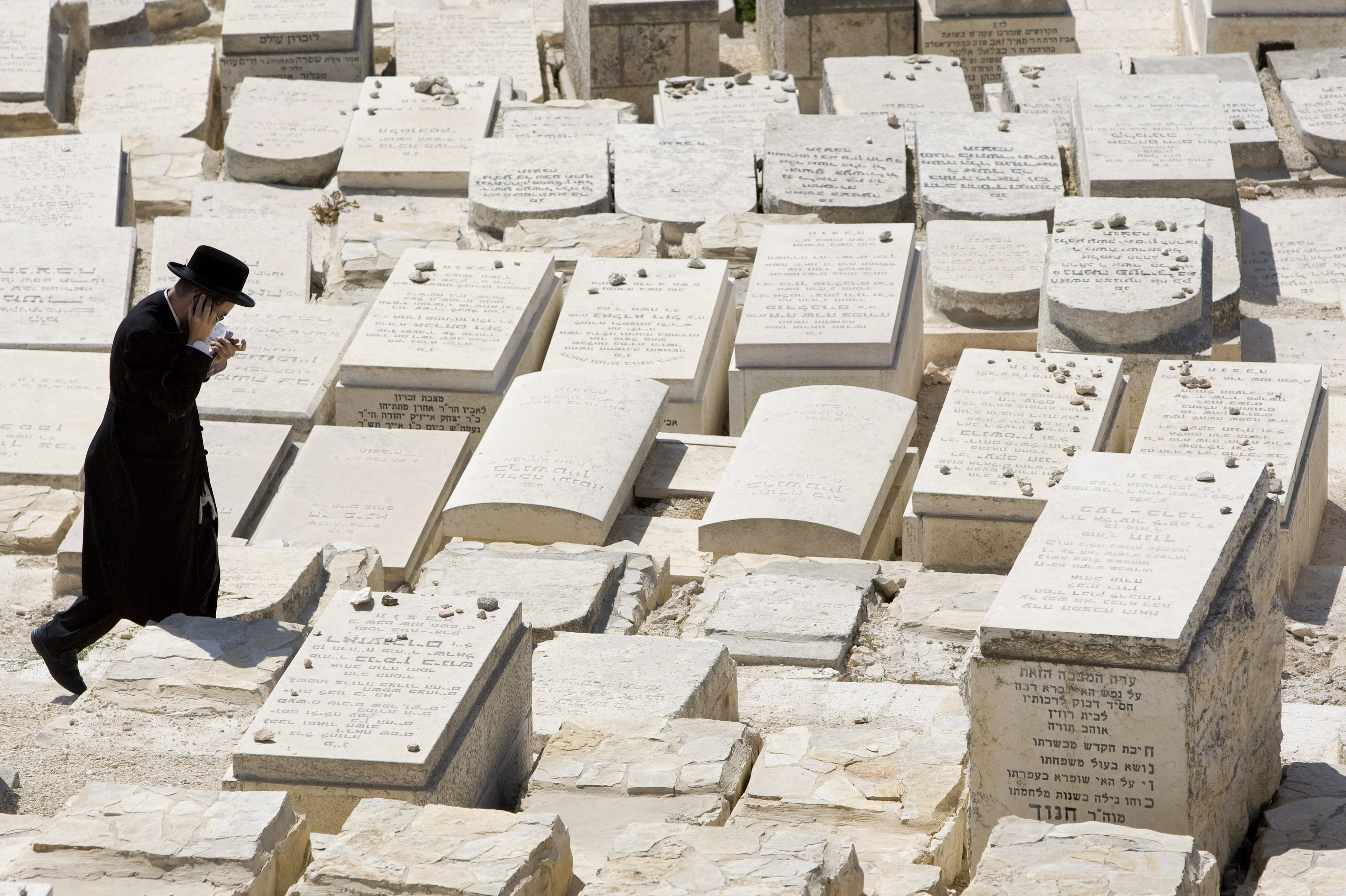 An ultra-Orthodox Jew walks in the Jewish cemetery on the Mount of Olives in Jerusalem June 15, 2009.  Arabs took the Jewish tombstones and used them to pave roads and even used as tops for latrines when they ruled Jerusalem from 1949 to 1967. REUTERS/Darren Whiteside

Jews could get a glimpse of the Western Wall, one of the holiest sites in Jerusalem from a perch at nearby Mount Zion. But that was it.

Even actor Paul Newman, who was half-Jewish, came to Israel to film the epic movie “Exodus” and tried to get into the Arab sector of Jerusalem. The Oscar-winning actor viewed the Western Wall from afar from Mount Zion on the Israeli side of the border, recalled Israel Medad, an American who for 30 years was a journalist. 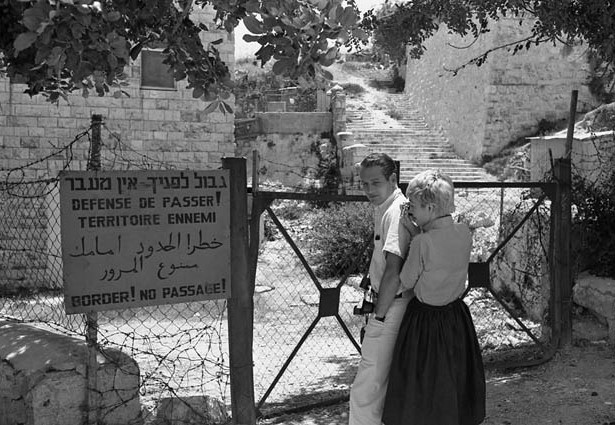 Actors Paul Newman and Eva Marie Saint stand next to barbed wire designed to keep out Jews from the Arab controlled part of Jerusalem in the early 1960’s.  They were there to film the epic movie “Exodus.”

Medad, now a senior researcher at the Menachem Begin Heritage Center in Jerusalem said at the time Israelis worried if they would ever get back into the eastern part of Jerusalem.

People would say, ‘When can we go back? Why can’t we go back? Why won’t the Jordanians allow that?'” he told TheDCNF in an interview from his home just outside Jerusalem.

“Remember, Arabs moved into Jewish homes,” he added. “These were homes built in the 1880s and 1890s by Jews. Somewhere in the neighborhood of 17,000 Jews had to leave the areas under Jordanian occupation.”

“We were told not to go near the barbed wired, stay away from ‘No-Man’s land at the border with eastern Jerusalem,” Medad recalled when he first traveled to Israel as a 19-year-old American student.

Jerusalem was eventually reunited into a single city and opened to all faiths in 1967, following Israel’s Six Day War.

The Six Day War, Israel’s second war, again pitted four major Arab armies against the tiny state of Israel. General Gamal Abdel Nasser set into motion a series of provocative military and diplomatic moves, including his order expelling a United Nations peacekeeping force that served as a buffer between the Egyptian and Israeli armies. He also unilaterally closed the Straits of Tiran, which was considered an open international waterway.

Israel considered the closure of the strait to be an act of war and its military struck Egypt with a surprise attack from the air on June 5, 1967. The attack destroyed nearly all Egypt’s Air Force. Within six days, the Egyptian ground forces were defeated and Israel won access to the Sinai Peninsula.

Suddenly, in six short days, the West Bank and the eastern part of Jerusalem fell into Israeli hands. It was a deeply emotional time for Israelis, many of whom rushed to the Western Wall to pray. Today, it usually is the high point for Jewish pilgrims who arrive in Jerusalem. In 1967, Jews were permitted to enter the Jewish Quarter for the first time in 19 years, and they finally had access to its holiest sites.

But Christians also suffered under Arab rule. Jordanians and local Arabs severely restricted Christian schools, requiring them to only teach in Arabic and teach the Koran as gospel. Many mosques were built next to churches to humiliate Arab Christians, according to the Gatestone institute. And Christians, along with their churches and charities, were not permitted to buy land in Jerusalem.

Between 1949 and 1967, two-thirds of Christians left areas of Arab control of Jerusalem and the surrounding area, according to the Center for Accuracy in Middle East Reporting in America.

“Christians didn’t complain because they didn’t believed that their complaints would be received,” Hagee told TheDCNF. 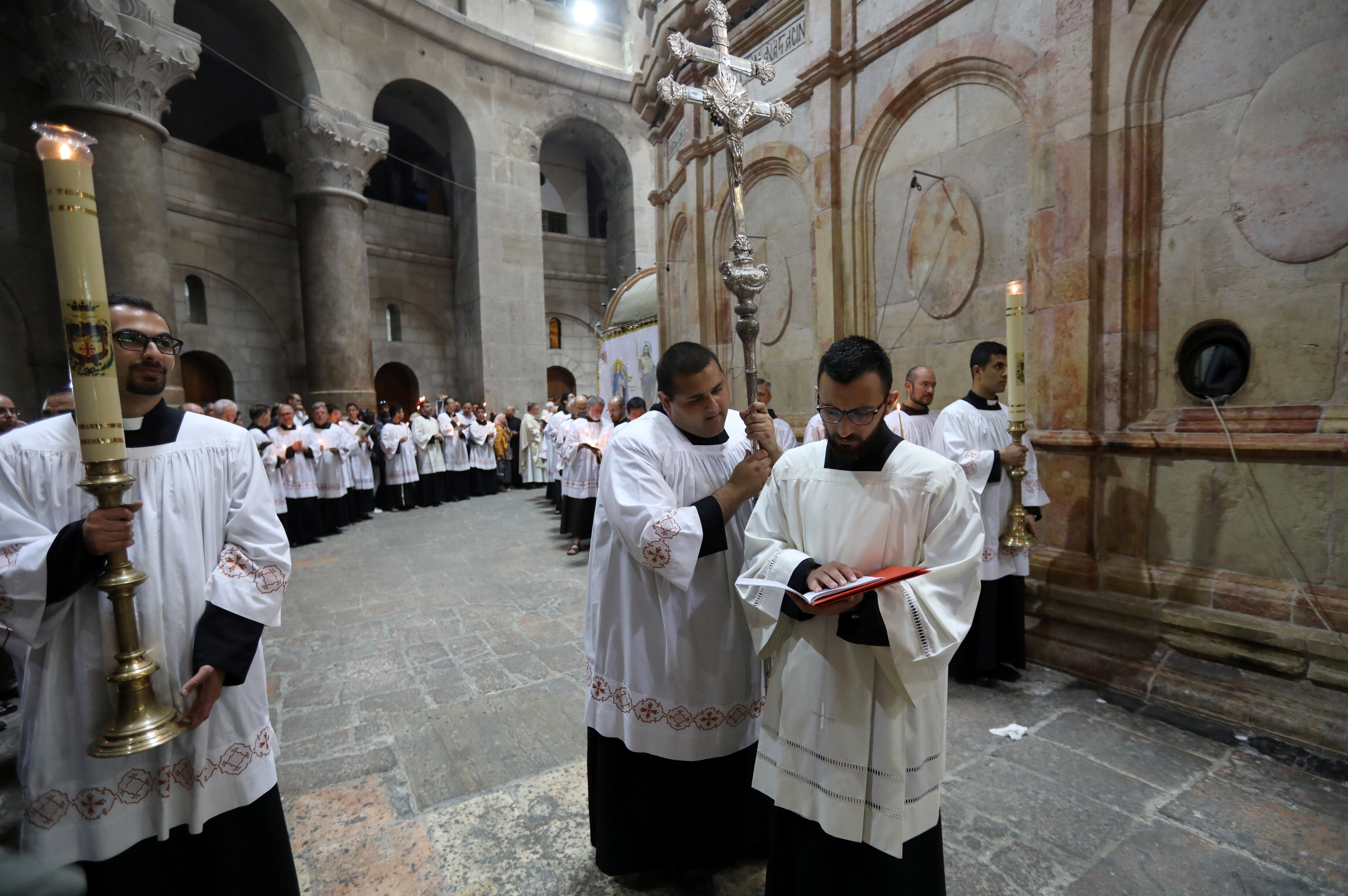 Christian worshippers take part in a Sunday Easter mass procession in the Church of the Holy Sepulchre in Jerusalem’s Old City. Arabs restricted the number of pilgrimages during Christmas and Easter when Jordan ruled Jerusalem. Arabs barred Christians and Christian churches to own property in Jerusalem when they governed the holy city. April 16, 2017. REUTERS/Ammar Awad

But it was the Jews who felt the brunt of Arab persecution. Five years after World War II, when Jews were still attempting to regain possession of homes and property seized by German Nazis, Arabs commandeered Jewish homes in the eastern half of the city and occupied them.

When Israeli soldiers entered the Jewish Quarter after the 1967 Six Day War, they found the area “completely neglected and virtually destroyed,” according to the Jewish Virtual Library, which calls itself the most comprehensive online resource on Jewish history, politics and culture.

Jews were barred from the city during Arab Muslim rule. Fifty-six Jewish synagogues were vandalized by Arabs in the eastern part of Jerusalem, then fully destroyed. Not a single synagogue operated while the Arabs controlled the city, according to the 1967 Israeli Ministry report.

One of the most heartbreaking discoveries for the Jews was the desecration of the Mount of Olives, a Jewish cemetery that had been in continuous use for 2,000 years before Jordanian rule.

According to the 1967 Israeli report and other eyewitness accounts obtained after the Six Day War, Arabs plowed up and desecrated the cemetery.

A 2009 report by the Jerusalem-based Jewish Center for Public Affairs recounted the destruction of one of the holiest cemeteries in all of Judaism. Arabs tore up the tombstones and used them as paving stones for walkways, roads and even for latrine covers, according to the Center’s report.

“Four roads were paved through the cemeteries, in the process destroying graves including those of famous persons. Skeletons and bones were strewn about and scattered. Tombstones were used as paving stones for roads in the Jordanian Army camp in Azariya,” the JCPA reported.

The 1967 Israeli report, filed at the time by the Jewish Telegraph Agency, added further grisly details. “Part of the road to the Intercontinental Hotel was paved with tombstones. And the Jordanians never bothered to remove the remains of the dead,” the JTA reported.

Hagee agreed about the desecration of the Jewish graves. “It’s well known that Jewish holy sites were damaged or destroyed. Jewish headstones from graves were used to pave the streets. Jews and Christians were banned from praying at the Western Wall.”

He said the overall denial of access to the Western Wall, the remaining wall of the Second Jewish Temple, hurt Christians too.

“Christians, we too believe that the Western Wall is a holy site too,” he concluded.