A radical Christian terror group calling itself the Sons of Jesus has claimed responsibility for the Egyptian mosque bombing in late November, but the claim has inspired skepticism among terror analysts, who believe the attribution — and the group itself — may be a rare example of an ISIS false flag.

In what has become known as Egypt’s most destructive terror attack in recent history, 25 to 30 militants detonated a bomb inside the Al Rawda Sufi mosque in the small town of Bir al-Abed on Nov. 24 and began firing at worshipers fleeing the scene. The attack left 311 worshipers dead and 128 more injured.

Several hours after the massacre had taken place, the Egyptian military hit back with airstrikes against militants in four-wheel-drive vehicles close to Bir al-Abed.

Nabil Sadek, Egypt’s chief prosecutor, stated that the militants were carrying an ISIS flag during the attack, and yet, ISIS has still not claimed responsibility for the atrocity, despite the fact that the terror group has had its sights set on the area before. Local terror group Ansar Beit al-Maqdis, which changed its name to the Sinai Province group after pledging allegiance to ISIS in November 2014, killed Sufis in the exact same region. One of its commanders condemned Sufis in a January 2016 interview for engaging in “sorcery and soothsaying.”

ISIS itself believes that Sufism is a “disease,” and the group has a history of destroying Sufi shrines in acts of self-described purification.

As such, all signs point to ISIS as being the originator of the attack, but instead of rushing to claim responsibility, pro-ISIS channels have been spreading a poster purporting to be from the Sons of Jesus, a new radical Christian terror group. The following poster announced the existence of Harakat Abna Yeshua (the Sons of Jesus) and included a claim of responsibility for the devastating mosque attack in the Sinai region, which left 311 dead. The purported group declared that “Muslim terrorists” will be the target of future attacks for as long as they continue to assault Christians. 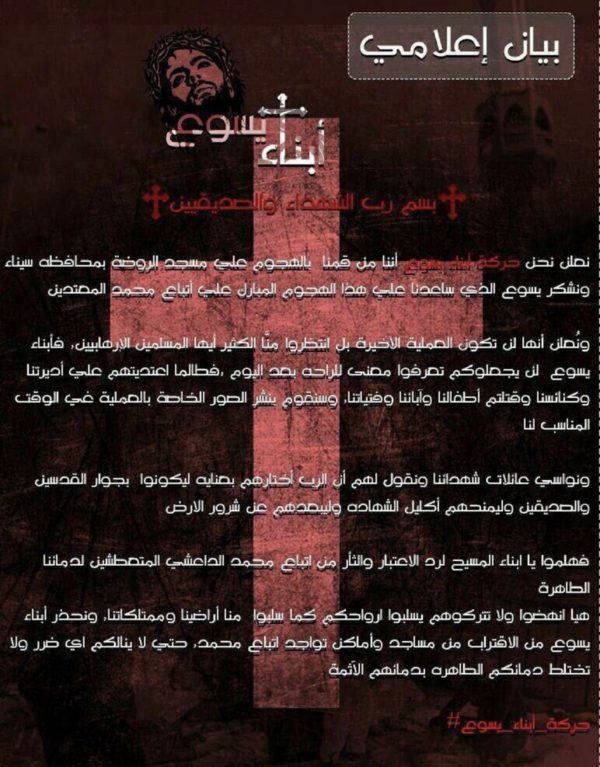 The Daily Caller News Foundation obtained a translation of the poster originally in Arabic:

In the name of the Lord of martyrs and saints:

We declare that we, the movement of the Sons of Jesus, have attacked the Al Rawda mosque in Sinai and thank Jesus for this blessed attack on the aggressor followers of Mohammed.

We declare that it will not be the last operation, but await a lot from us, Muslim terrorists. For the Sons of Jesus will not let you know the meaning of rest (relaxation) after today and for as long as they assault our  monasteries and our churches and kill our children and fathers and daughters. We will publish pictures of the operation at an appropriate time.

We will console the families of our martyrs and tell them that the Lord has carefully chosen them to be among the holy and the righteous and to give them a crown of martyrdom and keep them away from the sins of the Earth.

Come, Sons of Christ, to regain your respect and to take revenge from the followers of the Daesh Mohammed, who thirst for our pure blood.

Come and get up and do not let them take away your lives as they robbed us of our land and property and warn the children of Jesus (away) from approaching the mosques places where the followers of Mohammed (are) so (they) do you no harm and do not mix your pure blood with their accursed (evil/sinful) blood.

Chris Sampson, terror analyst at the Terror Asymmetrics Project, told TheDCNF that pinning responsibility on another group for an attack is an incredibly unusual tactic for ISIS.

“The veneration of saints is considered to be really bad according to ISIS, so the fact that this is a Sufi location … it has all the hallmarks of an ISIS strategy.”

According to Sampson, it’s possible that ISIS is trying to blame the attack on a radical Christian group to avoid worsening relations with al-Qaida, which has repeatedly criticized ISIS for attacking soft-spot civilian targets. Moreover, it would be unprecedented for Coptic Christians to form a terror group and target worshipers at a mosque. Copts usually take revenge on an individual level in response to attacks.

Sampson noted that ISIS has never engaged in the equivalent of a false flag attack before, but the group has claimed responsibility for attacks later proven to be carried out by other terror groups. For example, ISIS’ official news agency claimed an attack in Jerusalem that killed a policewoman soon after it took place, but Israel Defense Forces countered that the attack had been committed by a local cell of Palestinian youths who knew each other but were not part of any formal terror organization. Hamas and the Popular Front also dismissed ISIS’ claim.

Bill Roggio, senior fellow at the Foundation for Defense of Democracies, said he suspects no such group as the Sons of Jesus actually exists and noted that the attack has all the hallmarks of ISIS.

“My suspicion is there is no such group, but I can’t tell you that for certain,” Roggio told TheDCNF. “I know the Islamic State has threatened that mosque in the past. They’ve conducted attacks like that. There has been no claim of responsibility, which is unusual. Usually they have no qualms about claiming such attacks.”

“It could be an Islamic State false flag operation to incite violence against Christians,” Roggio said. “It would be pretty unprecedented.”

Additional reporting from The New York Times has shed some more light on possible motives behind the attack. In early November, a group of elders in the northern Sinai peninsula delivered three suspected ISIS terrorists to the authorities. Three weeks later, militants launched the devastating mosque attack, indicating that revenge was a motivating factor alongside the polytheistic heresies of Sufism — namely the worship of saints.

Former Sinai official Ahmed Sakr believes that a splinter group of the ISIS affiliate Sinai Province is responsible for the attack.

“The attack on the mosque was almost certainly carried out by the El Arish group,” Sakr told The New York Times.

Sakr added that the central ISIS Sinai group “would not approve” of the attack on civilians, “but the Arish people are happy to kill anyone and everyone.”

The Sinai Province has been devastatingly effective in killing civilians and targeting specific assets in recent years, but the group mostly focused on Egyptian security forces, after President Abdel Fattah el-Sisi overthrew President Mohamed Morsi in 2013 and prior to its pledge of allegiance to ISIS.

The original group, Ansar Beit al-Maqdis, splintered in 2014 and one faction identified with ISIS. That faction massively increased the sophistication of its attacks and adopted a media presence akin with that of its head organization. The group split yet again after failing to seize a town in eastern Sinai in 2015, with one side moving to the region of El Arish. This second splinter group is the group Sakr thinks is responsible for the attack.

Before the first split, Ansar Beit al-Maqdis scored a blow on the Egyptian security forces in 2014 by taking out a helicopter using a MANPAD portable missile launcher, but in the post-split realm, civilians have also become a central target. American officials believe the Sinai Province was behind the bombing of a Russian jet in 2015 that resulted in the deaths of 224 passengers.

In November 2016, ISIS militants beheaded a Sufi cleric in the town of El Arish. They charged the blind cleric with practicing witchcraft.