The inspiration behind the Women’s March on DC, Linda Sarsour, has been accused of enabling the alleged sexual assault and harassment of a woman who worked for the feminist activist, according to the victim and two sources directly familiar with the matter.

Allegations of groping and unwanted touching were allegedly brought to Sarsour during her time as executive director of the Arab American Association. In response, Sarsour, a self-proclaimed champion of women, attacked the woman bringing the allegations, often threatening and body-shaming her, these sources alleged. The most serious allegations were dismissed, Asmi Fathelbab, the alleged victim told The Daily Caller, because the accused was a “good Muslim” who was “always at the Mosque.”

“She oversaw an environment unsafe and abusive to women,” said Fethelbab, a former employee at the Arab American Association. “Women who put [Sarsour] on a pedestal for women’s rights and empowerment deserve to know how she really treats us.”

Fathelbab is a 37-year-old New York native and was raised in a Muslim household. She was excited in 2009 to begin working at the Arab American Association of New York as a contractor. At the time, Sarsour was the executive director of the organization. Fathelbab worked for Sarsour for almost a  year, according to employment documents reviewed and authenticated by TheDC.

Fathelbab claims the Arab American Association was an unsafe workplace where she was allegedly sexually assaulted, body-shamed and intimidated.

Oftentimes, Sarsour was directly involved, according to the ex-staffer’s account. The problems began in early 2009 when a man named Majed Seif, who lived in the same building where the Arab American Association offices are located, allegedly began stalking Fathelbab.

“He would sneak up on me during times when no one was around, he would touch me, you could hear me scream at the top of my lungs,” Asmi Fathelbab tells TheDC. “He would pin me against the wall and rub his crotch on me.”

Asmi claims one of Majed’s alleged favorite past times was sneaking up on her with a full erection.

“It was disgusting,” she tells The Caller. “I ran the youth program in the building and with that comes bending down and talking to small children. You have no idea what it was like to stand up and feel that behind you. I couldn’t scream because I didn’t want to scare the child in front of me. It left me shaking.”

The Daily Caller was provided with a link to Seif’s Facebook page and confirmed his identity, location and employment.

Fathelbab says she went to leadership at the organization to report the sexual assault. She alleges she was dismissed by Sarsour outright. “She called me a liar because ‘Something like this didn’t happen to women who looked like me,'” Asmi says. “How dare I interrupt her TV news interview in the other room with my ‘lies.'” 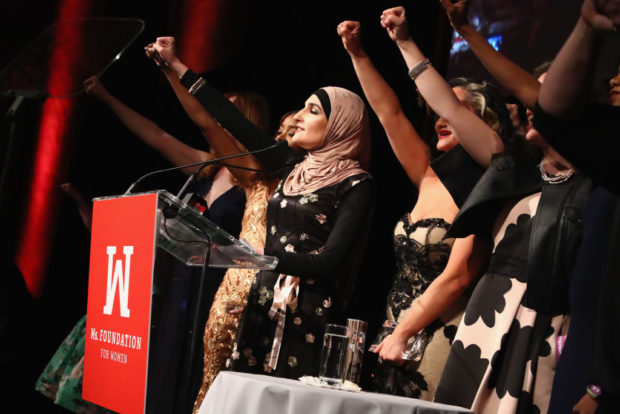 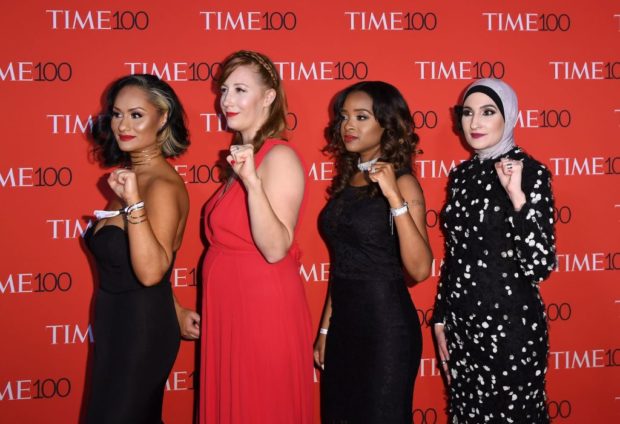 According to Fathelbab, Sarsour threatened legal and professional damage if she went public with the sexual assault claims.

Desperate after multiple dismissals by Sarsour, the distraught employee says she went to the president of the board of directors, Ahmed Jaber.

“Jaber told me my stalker was a ‘God-fearing man’ who was ‘always at the Mosque,’ so he wouldn’t do something like that,” Fathelbab claims. “He wanted to make it loud and clear this guy was a good Muslim and I was a bad Muslim for “complaining.”

A furious Sarsour allegedly raged against Fathelbab for continuing to report her sexual assault in the building. According to Fathelbab, her allegations would result in her getting written up for disciplinary action. She told TheDC she was once forced to talk to a detective from the community liaison division about the consequences of making false claims to the authorities. 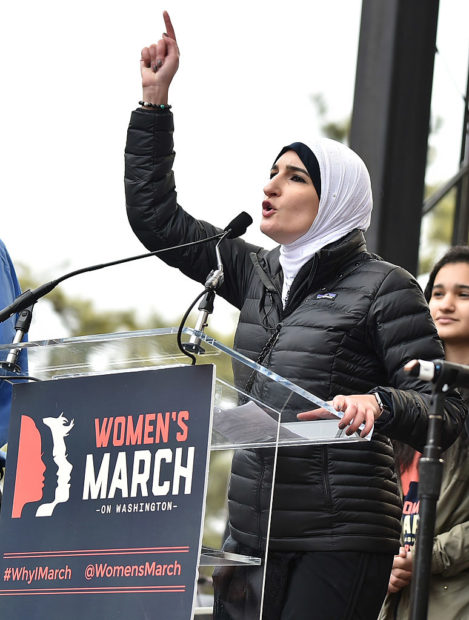 After Fathelbab’s contract was up, Sarsour allegedly threatened to keep her from working again in the city.

“She told me I’d never work in NYC ever again for as long as she lived,” Asmi says. “She’s kept her word. She had me fired from other jobs when she found out where I worked. She has kept me from obtaining any sort of steady employment for almost a decade.”

Two people who knew Fathelbab during her time at the Arab American Association spoke with TheDC on condition of anonymity. Both corroborate her story, recalling that Asmi would return “emotionally distressed and in a panic” from work, often describing it as an “unsafe” work environment.

Another New York political operative, who spoke on the condition of anonymity, claims that Sarsour was “militant against other women” at the Association. This operative, who has worked for over 12 years with the Arab American Association, says they remember Asmi and witnessed her getting harassed in the building.

“They made it about her weight, saying she was not attractive enough to be harassed and then swept it under the rug,” the source said. “It was Linda Sarsour, Ahmad Jaber and Habib Joudeh who took care of it.” Habib Joudeh is the vice president of the Arab American Association of New York.

The source even identified Fathelbab’s alleged assaulter without prompting, “Majed Seif, the man who lived in the building.”

The operative, who is a practicing Muslim in the community, says a toxic culture at the Arab American Association led to the environment of harassment.

“It’s always going to be the woman’s fault over there,” she alleges. “And Sarsour was there to protect the men. She’s not for other women. The only women she’s for is for herself.” 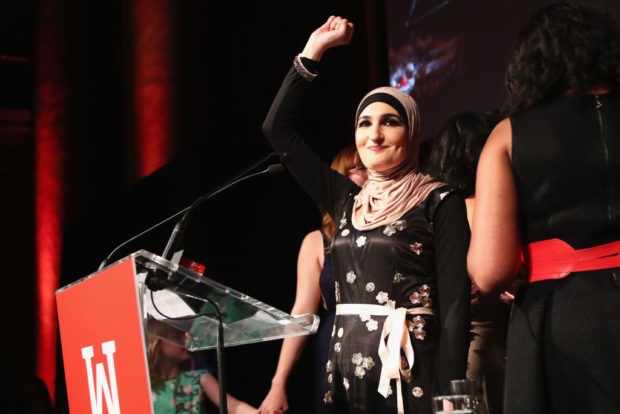 Another New York political insider, who has worked professionally with the Arab American Association for over a decade, says this is not the first time they have heard a complaint like this.

“Sarsour is only a feminist outwardly,” the insider said on the condition of anonymity, due to the source’s current political position. “Her interactions toward women in that building were atrocious. She would protect the patriarchy and in return they would promote her.”

Fathelbab career has never recovered, however, after her nightmare at the the Arab American Association.

“Just wait until more people start to talk,” she says. “Sarsour is no champion of women. She is an abuser of them.”

TheDC has reached out to both Sarsour, the Women’s March Organization, Majed Seifand the Arab American Association for comment multiple times over the last 48 hours. Our requests for comment have been met with silence. We will update the post with any new information as it comes.

Here is an annotated account of the sexual assault, provided to The Daily Caller by Asmi Fathelbab:

I cannot stand by any longer and watch everyone praise a woman that claims to be for women’s rights and someone that fights for women when she herself allowed for abuse to occur to women.

The #METOO movement angered me because it gave me flashbacks to things that occurred while working for a non-profit in 2009.

In 2009, I was contracted under AmeriCorps to work for the nonprofit The Arab American Association of New York, in Brooklyn where Linda Sarsour was the acting director of the organization. The following occurred to me during that 12 month nightmare called a job.

I was stalked to and from work and inside the building. I complained to a supervisor that there was a strange man stalking me and was informed that he did not actually work there but lived upstairs above the office.

He would sneak up on me during times when no one was around and, depending on what floor I was on, you could hear me scream at the top of my lungs.

I would be thrown and pinned up against the wall by him.

He had a tendency of sneaking up behind me to touch me.

While this would go on, the acting director, Linda Sarsour, would tell me each time that I was over reacting, even threatened to fire me once when she heard me screaming from the second floor because this man came out of nowhere and touched me. According to Sarsour,  something like that did not happen to someone that looked like “me” and no one would ever believe me if I ever told them what happened. How dare I interrupt her TV news interview in the other room with my lies.

I went to the president of the organization and was told my stalker was a God-fearing man who was always at the Mosque so he wouldn’t do something like that and that I wasn’t his type anyway, so I was just making things up because I wanted attention.

I was told this was a man that worked at the United Nations and it was made loud and clear that whatever I was saying to defame his name could be used against me when he wanted to sue me.

I received a call from the supervisor from Detroit where she asked me to tell her in detail what was happening and told me she’d take care of it.

I thought I was saved and everything would be OK until I received a call from her the next day calling me a liar, threatening to cancel my contract and write me up. At the same time, Linda Sarsour was informing me that she would make sure I would never work in New York City ever again for as long as she lived.

On top of that, later that afternoon I had a visit from a community liaison Detective from the NYPD. He came to my office locked the door and proceed to tell me he was there to arrest me for making a false statement regarding being stalked, sexually harassed and sexually assaulted.

I had to talk him out from arresting me that night and explain that I was the victim.

I didn’t know what to do.

I’ve had several jobs that I was let go of since then when she had discovered that I was working there.

I’ve had several people tell me that I was unemployable because of what I did at that job. All I wanted was to feel safe and not worry some stalker was going to pin himself up against me so I would be fully aware that he was erect.

I wanted to be able to go home without the worries of him waiting to grab me in front of my house to rape me.

I’ve had several political jobs where Sarsour told the candidates that if they wanted to win the Muslim vote, they had to fire me and hire her instead because I was the most hated person within the Muslim community in all of NYC.

I haven’t been able to obtain a steady job since 2009 because AmeriCorps decided I shouldn’t be able to stay within the program because of the horrible write up I had obtained from my supervisors.

This is not the only story pertaining to Sarsour about what she does to women.  This is one of many. I cannot stand by and watch women put her on a pedestal and not know the truth.  Here is the truth: If you were in front of Linda Sarsour being sexually harassed, she wouldn’t help you, she’d try to shut you up for complaining.

I know because it happened to me.