Mitch McConnell was instrumental pushing tax reform through the Senate.

Today, McConnell and other members of GOP leadership who assisted in the bill’s passage, went to the White House for a victory lap. The typically mild-mannered McConnell was clearly thrilled at the ceremony, stating:

Well, let me just say, Mr. President, you made the case for the tax bill.  But this has been a year of extraordinary accomplishment for the Trump administration. We’ve cemented the Supreme Court right-of-center for a generation.  Mr. President, thanks to your nominees, we’ve put 12 circuit court judges in place — the most since the circuit court system was established in 1891.  You hold the record.

You’ve ended the overregulation of the American economy.  And that, coupled with what we did last night and what the House finished this morning, means America is going to start growing again.

However, the remarks at the ceremony were not the only gifts from McConnell. The Senate leader also gave the president a personalized Louisville Slugger bat in the Oval Office. 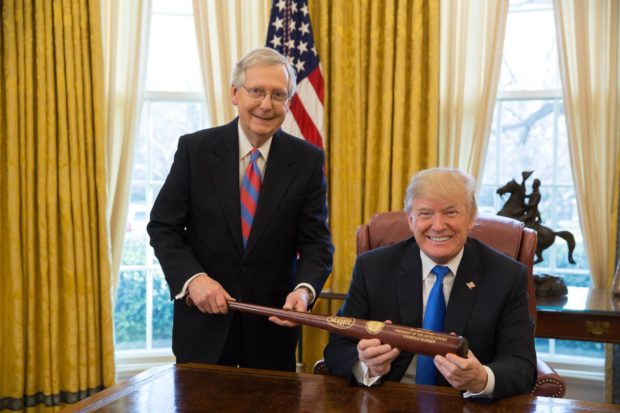 Going to bat for the middle-class with President Donald J. Trump on the #TaxCutsandJobsAct that will provide much-needed tax relief for American workers, families, and small businesses. Today I presented a personalized Louisville Slugger bat to the President in the Oval Office commemorating the home run on historic #taxreform.