This year marks the passing of prolific man: the novelist, playwright, screenwriter, director and actor Sam Shepard. He passed away in July from ALS (also known as Lou Gerhig’s disease) at age 73. During his career he received ten OBIE awards for his writing and directing for the stage. But he’s most famous for his role as test pilot Chuck Yeager in the 1983 film The Right Stuff.

The film is based on Tom Wolfe’s 1979 non-fiction book of the same name. One underlying theme is how differently test pilots and astronauts were treated.

Yeager (still alive at 94) should have been famous. He enlisted in the Army Air Force during World War II, rising to become a fighter pilot, renowned as becoming an ‘ace in a day’ for downing five German planes in one day. After the war, he became a test pilot at the barren Edwards Air Force base in southern California.

In October 1947, Yeager was the first person to push his jet through the ‘unbreakable’ sound barrier and he did so extravagantly. Shepard’s portrayal is spot-on, as he casually informs the ground crew that his altimeter is busted (it wasn’t calibrated to go beyond Mach 1). However, the press isn’t notified for security reasons. This drama occurs in the first 25 minutes of the film.

At minute 35, A. Scott Crossfield has broken the Mach 2 barrier in November 1953 (Yeager would beat that record a mere three weeks later). But unlike Yeager, Crossfield received extensive press coverage by the National Advisory Committee for Aeronautics aka NACA (NASA’s predecessor).

At the local bar, Yeager’s crewman says the ‘demon’ lies at Mach 2.3. A (presumably) NACA employee responds by stating how the press likes round numbers, with the implication that Mach 2.3 won’t mean much. Shepard-as-Yeager laconically responds by calling reporters “root weevils”. (Shepard pronounces root as ‘rut’ – a nod to Yeager’s West Virginian background.)

At minute 37, Shepard gets a drink from the bar. The bartender is played by the real Chuck Yeager!

Most of the rest of the film involves the selection and activities of the first American astronauts. Yeager cannot be an astronaut as he lacks a college degree.

Thus Yeager and the other Edwards test pilots keep working in the background.

The film cuts back and forth from the glitzy party to Yeager’s unobserved jet test flight at Edwards. The scene runs from hour 2, minute 52 to hour 3, minute 4.

Again, Shepard-as-Yeager is nonchalant about the flight, as he goes through his superstitious routine (getting a stick of Beeman’s gum from his crewman). Shepard/Yeager pilots the jet as if it was a horse, urging it on, but calmly.

As the fan dancer twirls, the jet climbs higher – so high it touches the boundary of the earth’s atmosphere. Too high, in fact, as the jet spins out of control, and Shepard/Yeager must eject.

Spoiler alert: He survives. But what a survival. This image (from a film poster) gives a clue to Shepard’s outstanding performance. It’s iconic. As he marches out the black smoke of his jet crash, he looks Lincolnesque. His chin is firm; eyes focused on the horizon. He is undaunted, bloodied but not bowed. He is a symbol of American bravery and persistence – one that can trace its roots to the founding of our nation.

Shepard went on to do many other things. His fiction is notoriously quirky, and he got in trouble with the law a couple of times.

However, he developed ALS several years ago, but never went public about it. It seems he shunned being a poster boy for a disease, and all the media attention that comes with it.

He continued to act and write, and when he could no longer act (due to loss of muscle control), he stuck to writing. 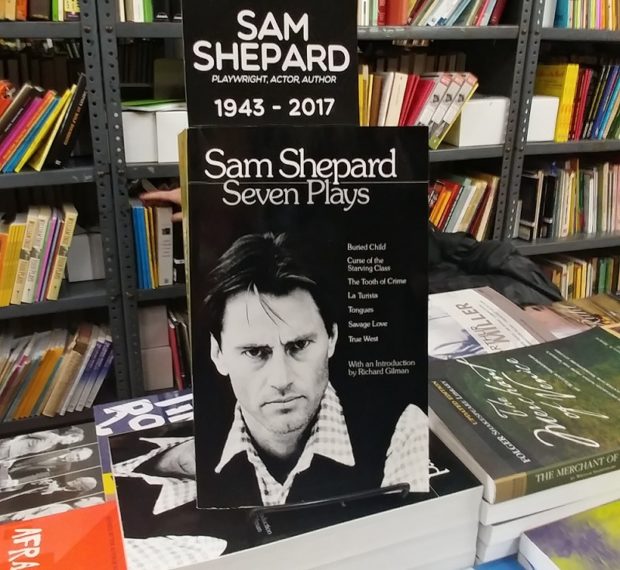 His final book (out this month) is ‘Spy of the First Person’. Shepard made a heroic and determined effort to eke out this slim work — part autobiography, part fiction. He dictated most of the manuscript to his children. Likewise, he dictated the edits to the manuscript to them.

Shepard died as he wished, quietly at his home in Kentucky. A true American, Sam Shepard lived and died on his own terms, telling his stories right up to the end. And, hopefully, his final image from ‘The Right Stuff’ will endure as the quintessential essence of American grit.

Joanne Butler is a graduate of the Kennedy School at Harvard, was a professional staff member (Republican) at the House Ways and Means Committee, and served in President George W. Bush’s administration. The Ghanaian poet, Kwesi Brew, has described her as ‘vibrant.’