Donald Trump Jr. is taking a beating in a new book by Michael Wolff. The spanking comes from former top White House aide Steve Bannon, who heads up Breitbart News after being fired from his 1600 Pennsylvania Avenue gig.

In Michael Wolff‘s buzzy book, Fire and Fury: Inside the Trump White House, Bannon eviscerates Don Jr., saying President Trump‘s eldest son would be “cracked like an egg on national TV” for meeting with a Russian lawyer in Trump tower. He called it “treasonous.”

Don Jr. isn’t keeping quiet. On Wednesday afternoon he used his Twitter platform of 2.41 million followers to strike back at Bannon’s less than perfect political might. 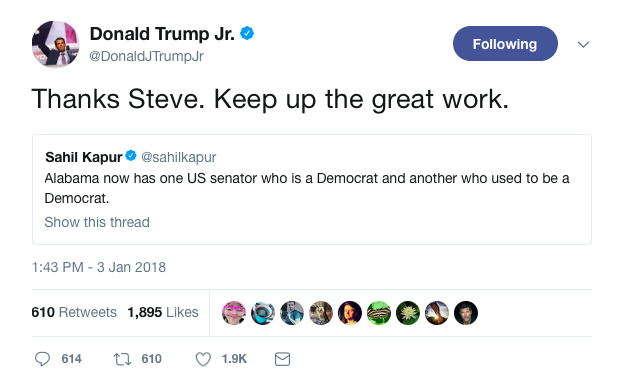 Don Jr. also went to Andrew Breitbart‘s grave and pulled out this whopper. “Andrew Breitbart would be ashamed of the division and lies Steve Bannon is spreading!” he wrote.

He then insisted that Breitbart News itself had turned against him: “Wow, Just looked at the comments section on Breitbart. Wow. When Bannon has lost Breitbart, he’s left with . . . umm, nothing.”

The White House is also punching back. Trump says Bannon “lost his mind” when he was fired from his post. White House press secretary Sarah Huckabee Sanders reinforced the president’s insult, saying Wolff’s book is filled with “false and misleading accounts from individuals who have no access or influence with the White House.”